Michael had yet to meet all of my Leipzig friends, so after our very short Paris trip, we headed to Germany. After being away for four years, I was so excited to go back. 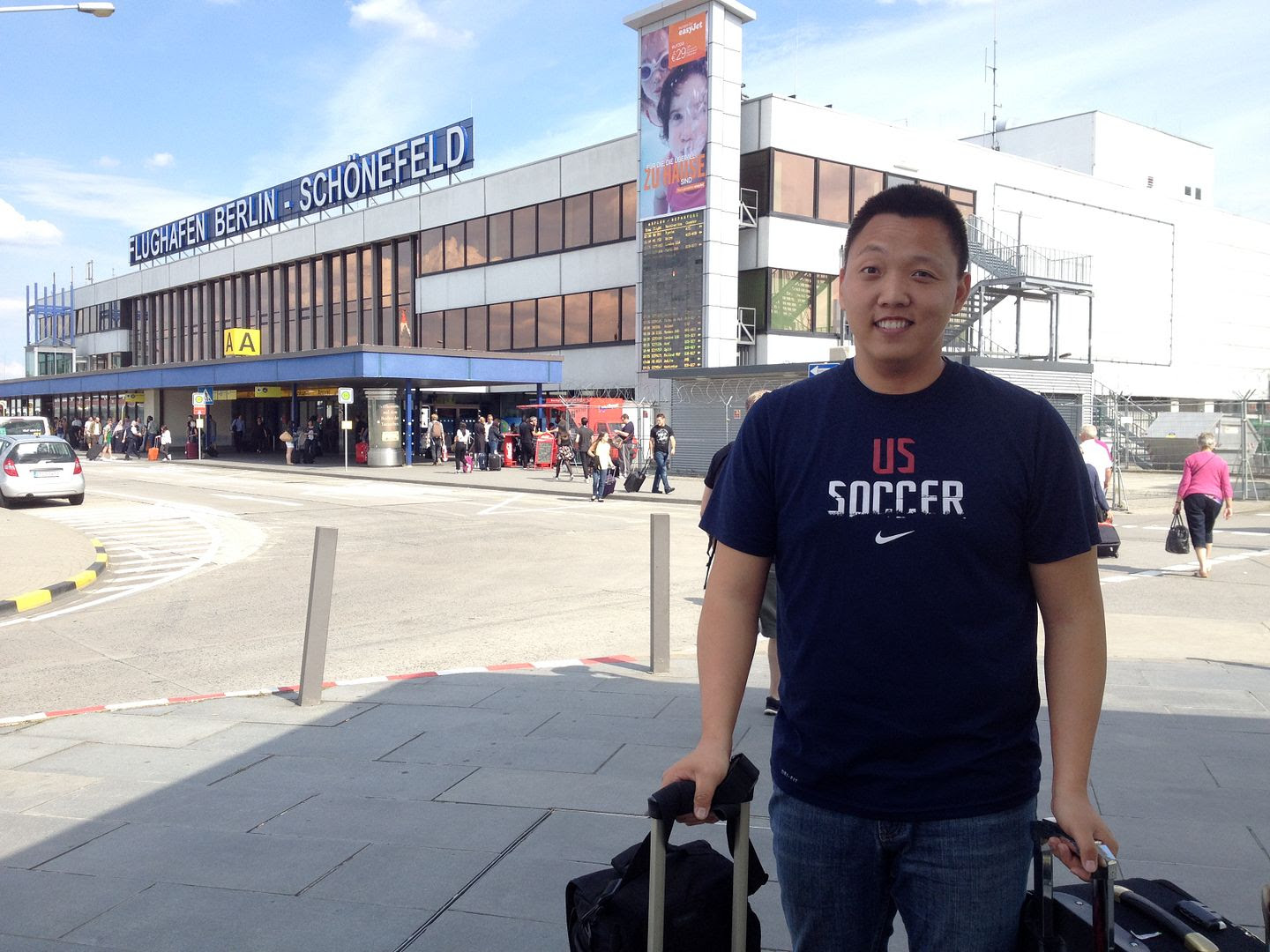 Michael thought it was funny to arrive in Germany with his US Soccer shirt on. The last time I was in Germany, the World Cup was going on, so I joked to friends that I'd be back every four years to cheer on Germany. 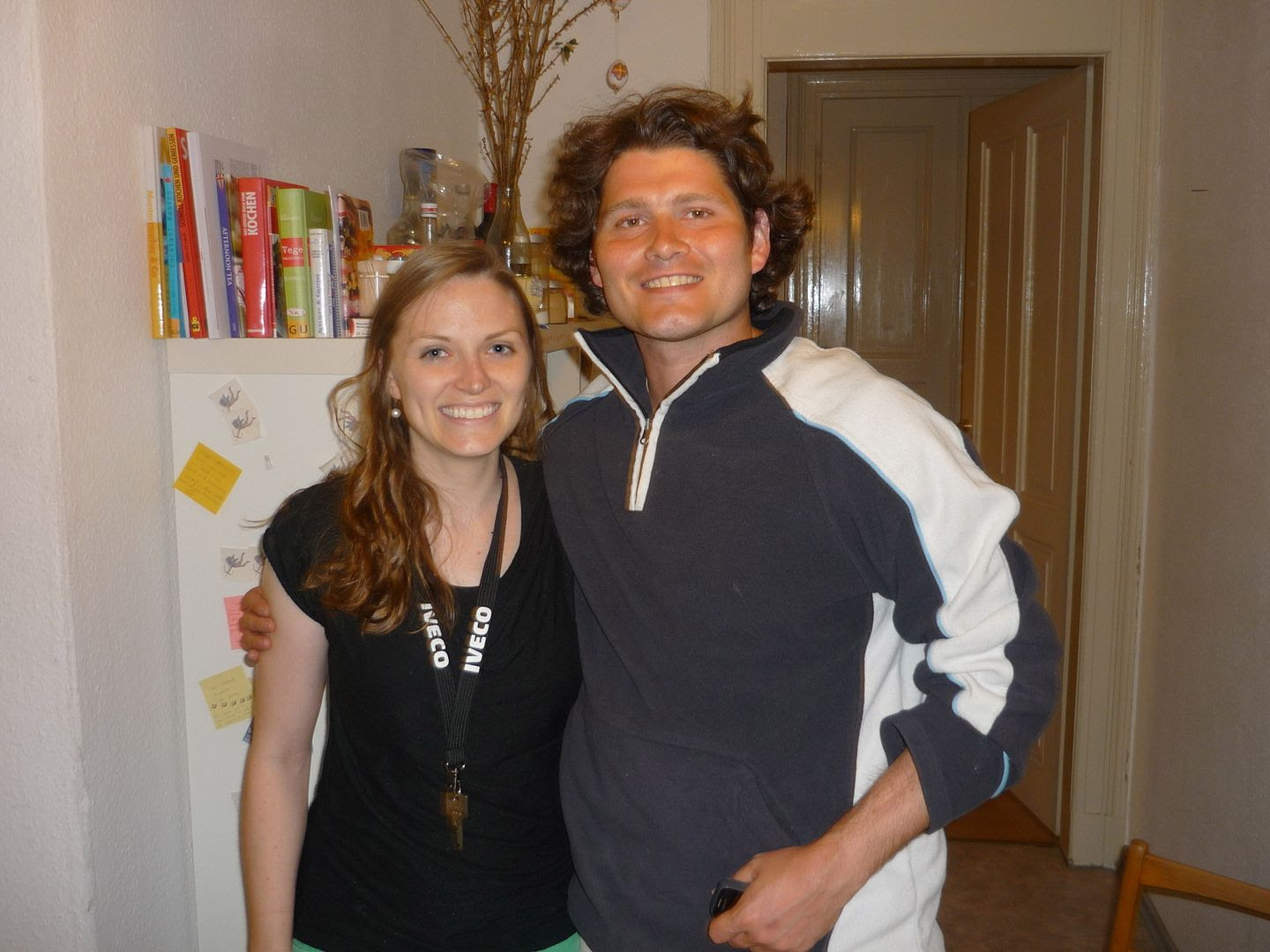 The very first evening, after dropping our stuff off at my friend Dajana's house which is near to where I used to live, we went to my old apartment and visited my old roommate, David. We even got a wonderful surprise—he introduced us to his wife and baby.

I was so happy that the smell of Bärlauch was still lingering in Schleußig. It sounds weird to like that a place smells kind of like the wild garlic that grows in the park nearby, but it's sentimental, okay?

The next day, we went with the Jakobis to the stake activity day, where I was über-happy to be able to greet so many people I used to see often. I jokingly thanked people for putting on this activity day to celebrate my visit. It was really interesting to see my friends' kids, and Michael and I ended up playing soccer for at least a couple of hours. We had three little kids on our team who stayed in the goal the entire time, so the other team grumbled that there was no way they could score, though they beat us in the end anyway. Poor Samuel Jakobi hurt his ankle when he tried to pull some tricky move on me. 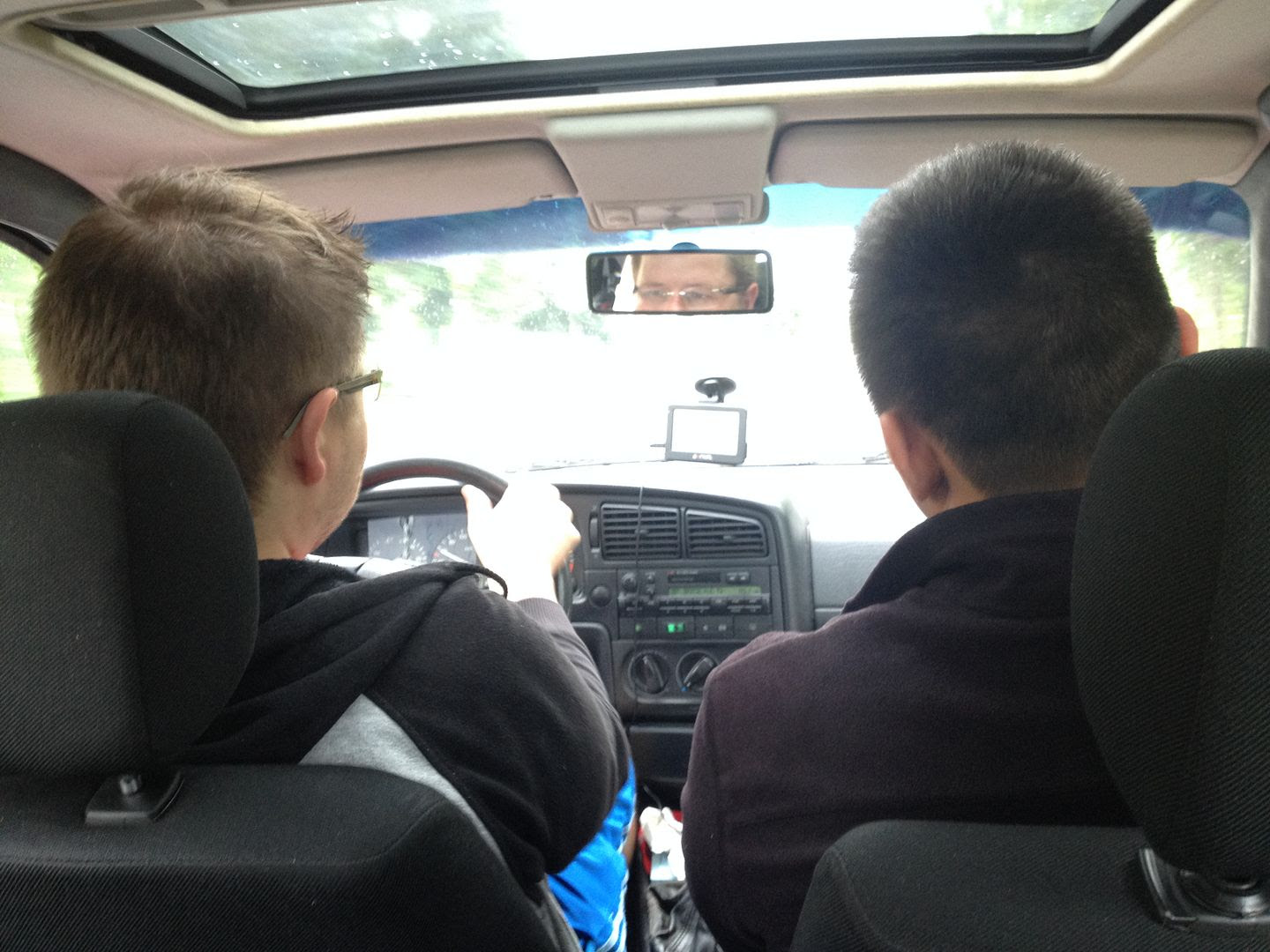 Here are my two favorite Mikes in the same car. Mike gave us a ride to the Jakobis so that we could stop and get döners with him. I should have ordered Michael's döner for him, because he asked for some random things like a whole bunch of cheese and olives, and I don't think his was very good. He liked mine, though. 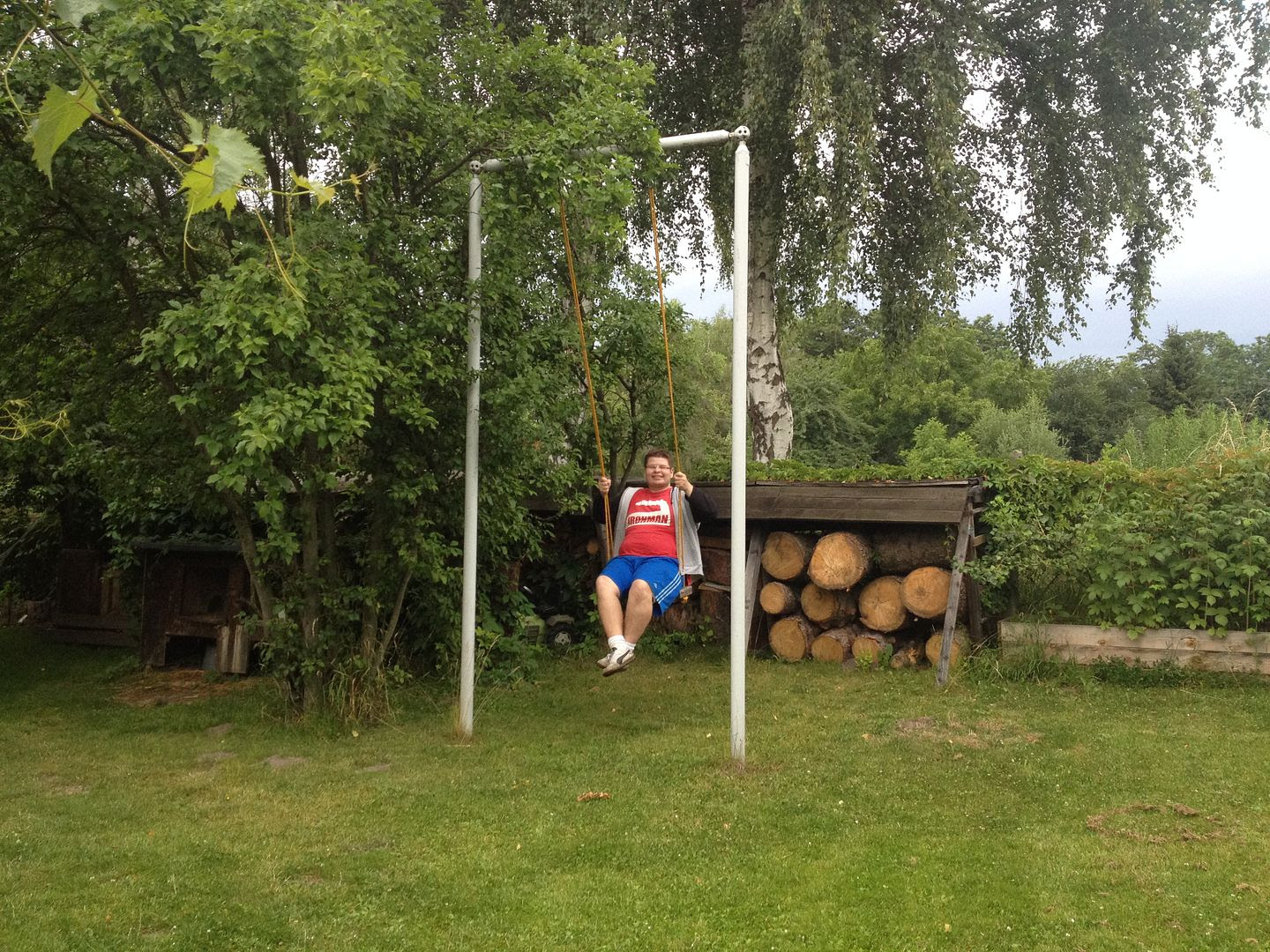 It was good to spend time with Mike. I've missed him. He's moving away from Leipzig and that makes me sad. 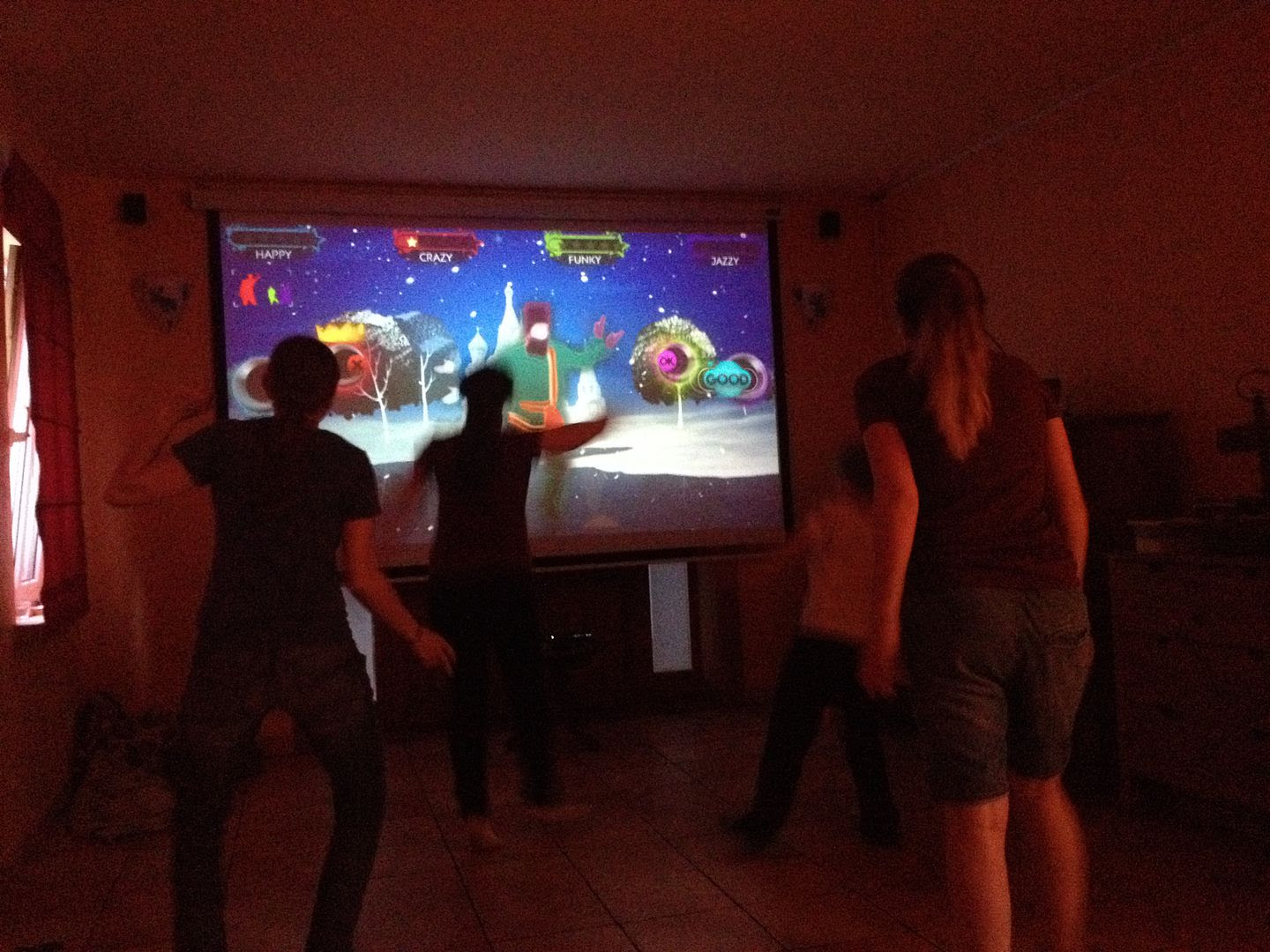 At the Jakobis', we enjoyed raspberries and cherries from the garden, played Just Dance (this "Ra Ra Rasputin" dance was tricky, but I needed to prepare for Russia!), and watched Chile lose (accompanied by Elisa's screams). I love the Jakobis and now Michael does, too.

The next day at church, I felt like I'd returned home. I got to meet Aaron's wife for the first time and I saw many old friends again, including Seppl, Markus's dad and grandpa, Judith, Christina, Holger, Tobias, Henrik, Melanie, Uta, and many others. I had told Michael that many of the members of the two Leipzig wards are related, but after I introduced him to so many and tried to make the connections for him, he was still surprised. I laughed when I greeted one of the kids I used to teach by name and he looked at me confused because he was too young then to remember me. 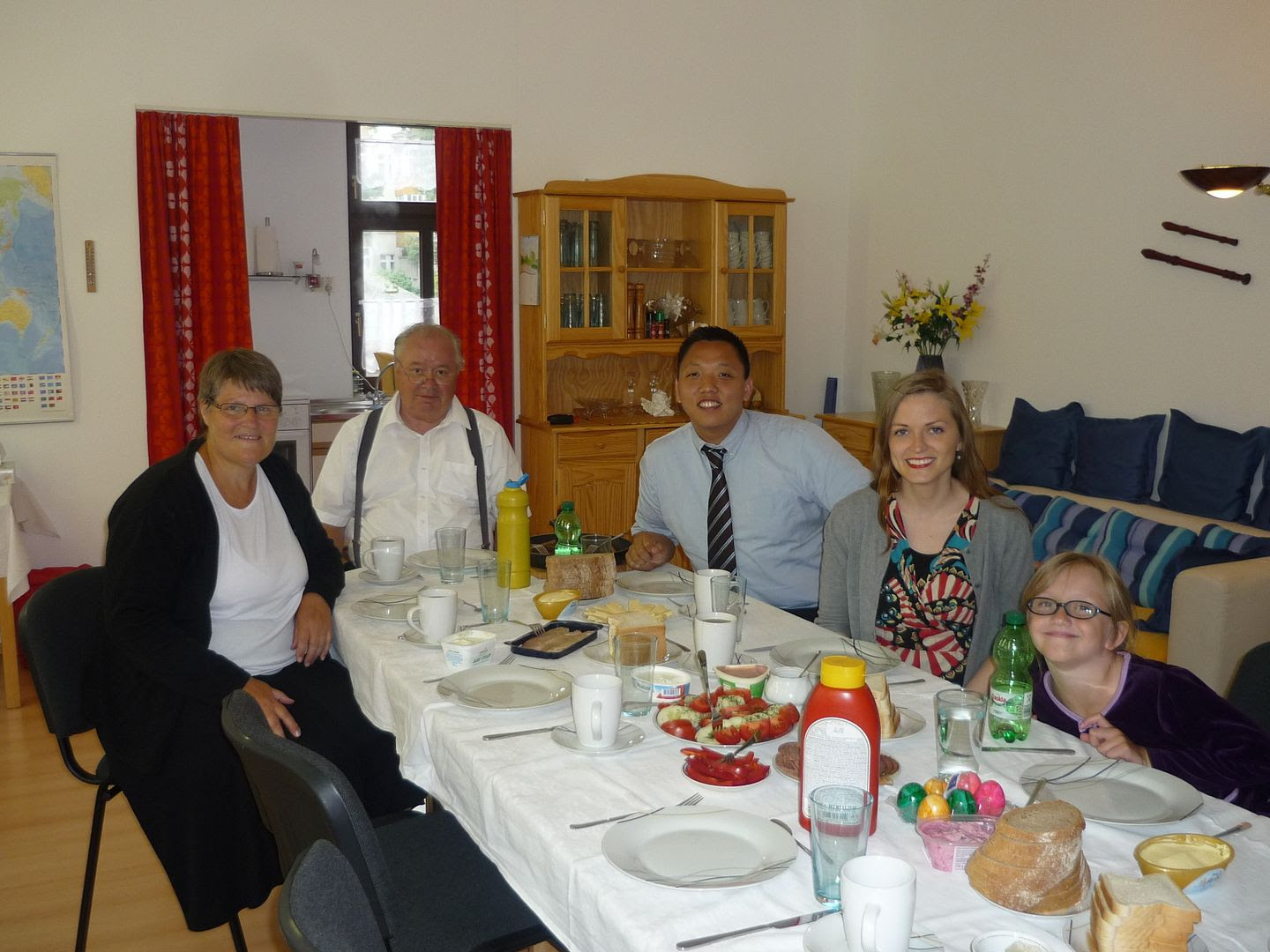 Sabine and Eberhard are such dear people. They threw together a last-minute dinner for us, and the frikadellen were a huge hit with Michael. I think he also liked the liverwurst, yum! The Werners' smart, energetic, and friendly American granddaughter was there. 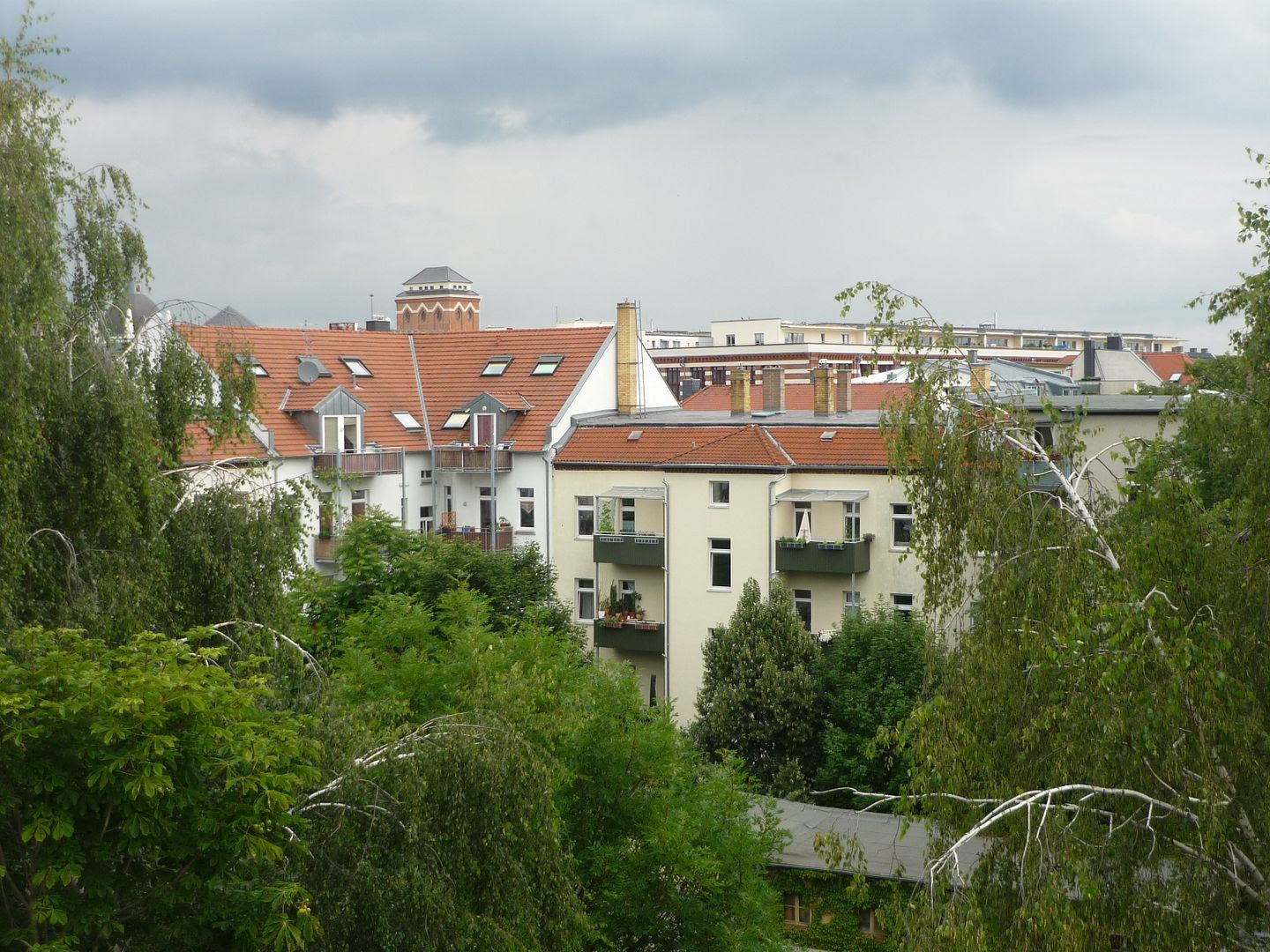 Inka let us stay at her cute place and even showed us the joy of hanging out on her roof. 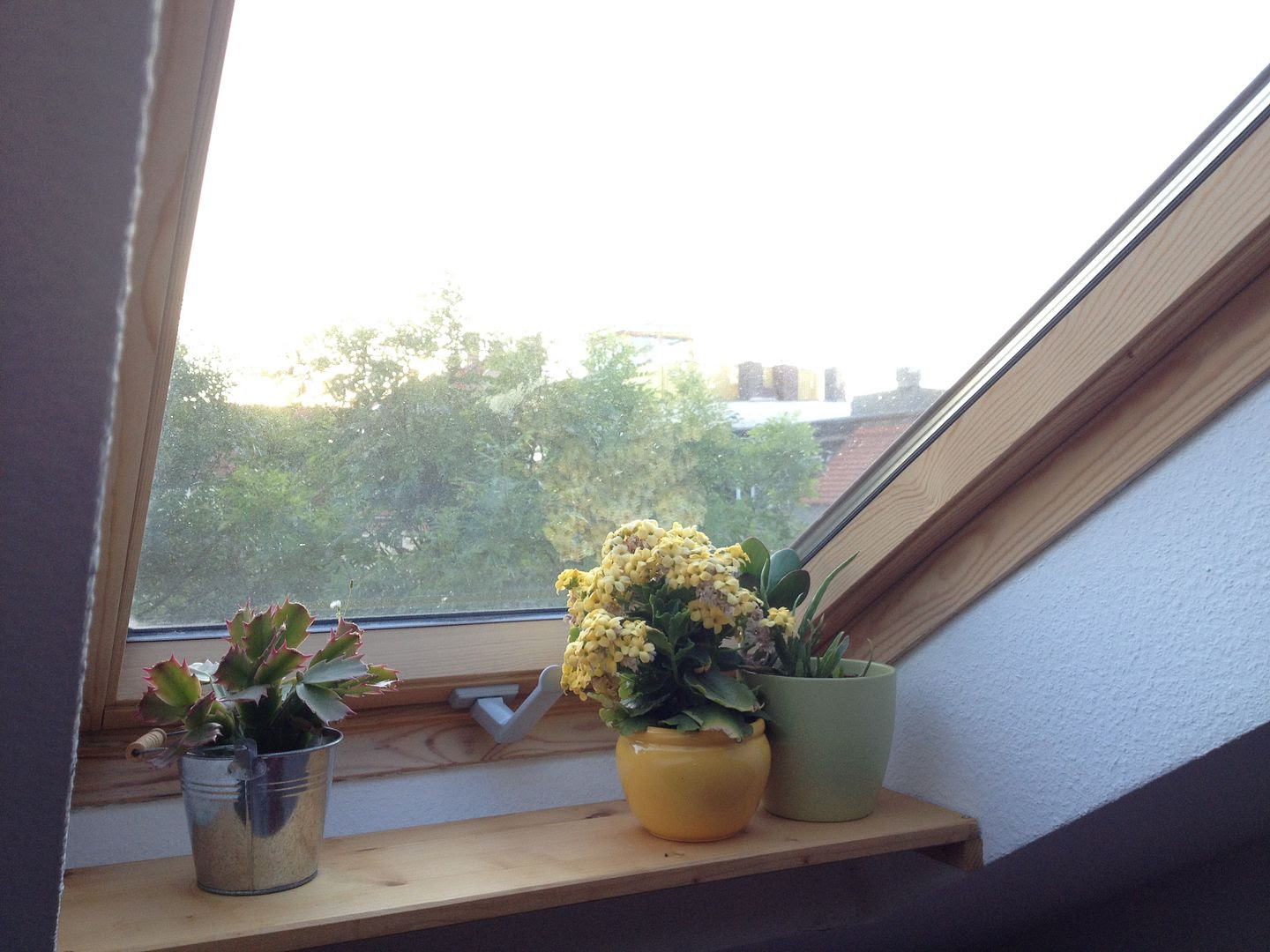 Mornings at her place were magical because of the sun coming through her top-story apartment's roof windows. 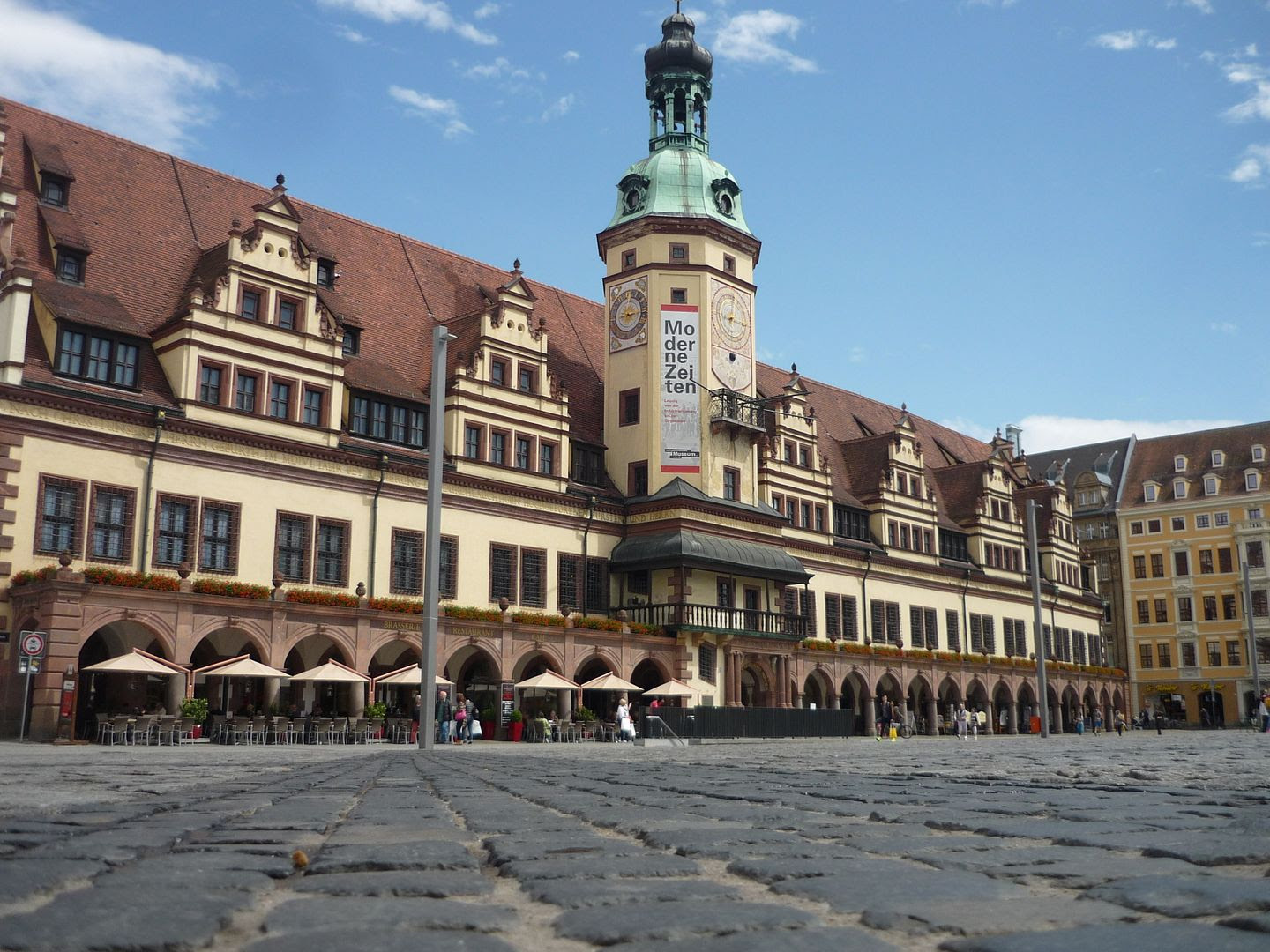 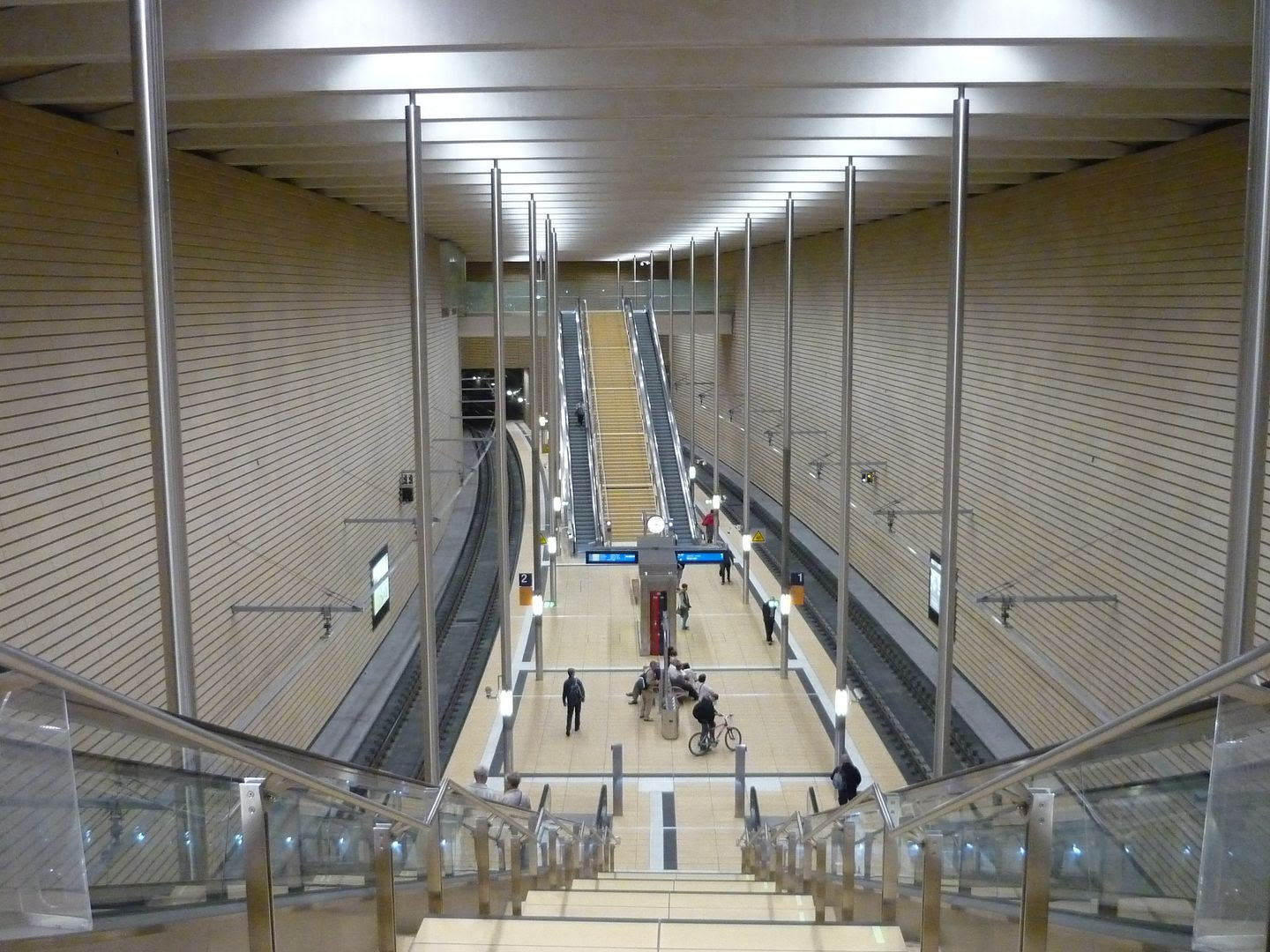 This tunnel was in progress while I was living there, and now it's done so trains can go right under the city. 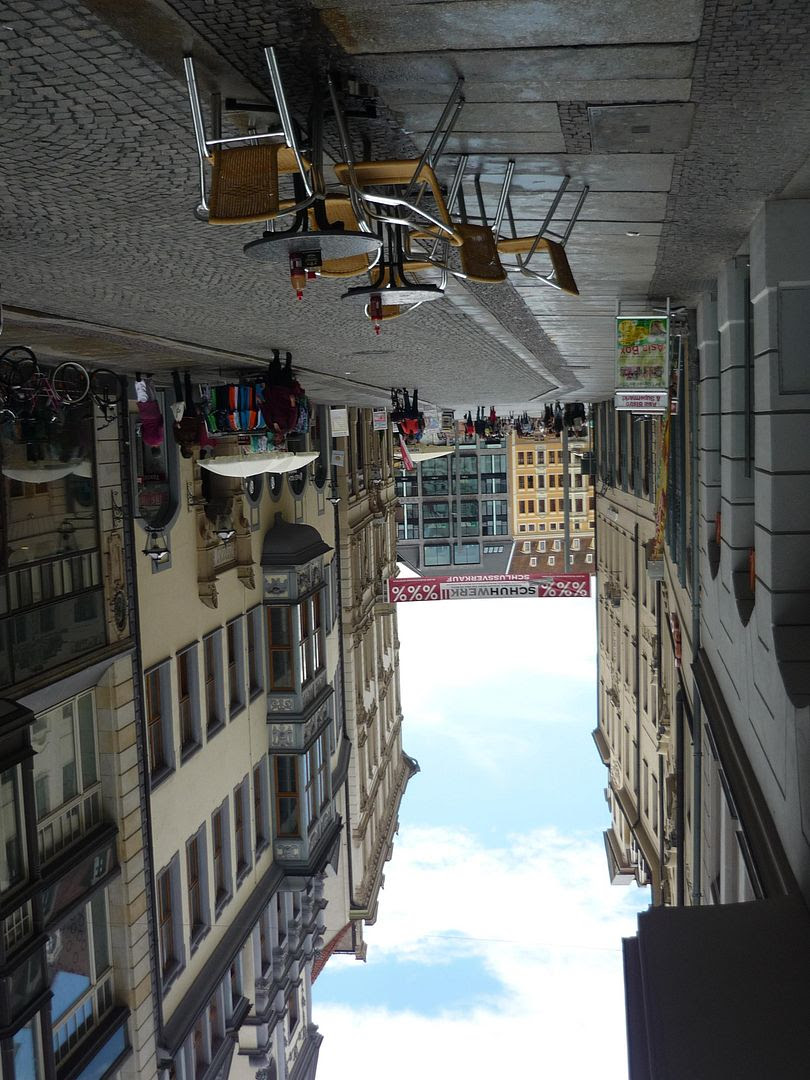 We spent several hours around here looking for a suitcase to replace the broken one we'd gotten at Oxfam, but in the end Michael decided to deal with the suitcase and toss it upon his return to the U.S. I showed Michael some of the Universität Leipzig buildings I used to frequent and we even ran into one of my old professors who advised the development of our literary journal aspeers, the first European American Studies journal. 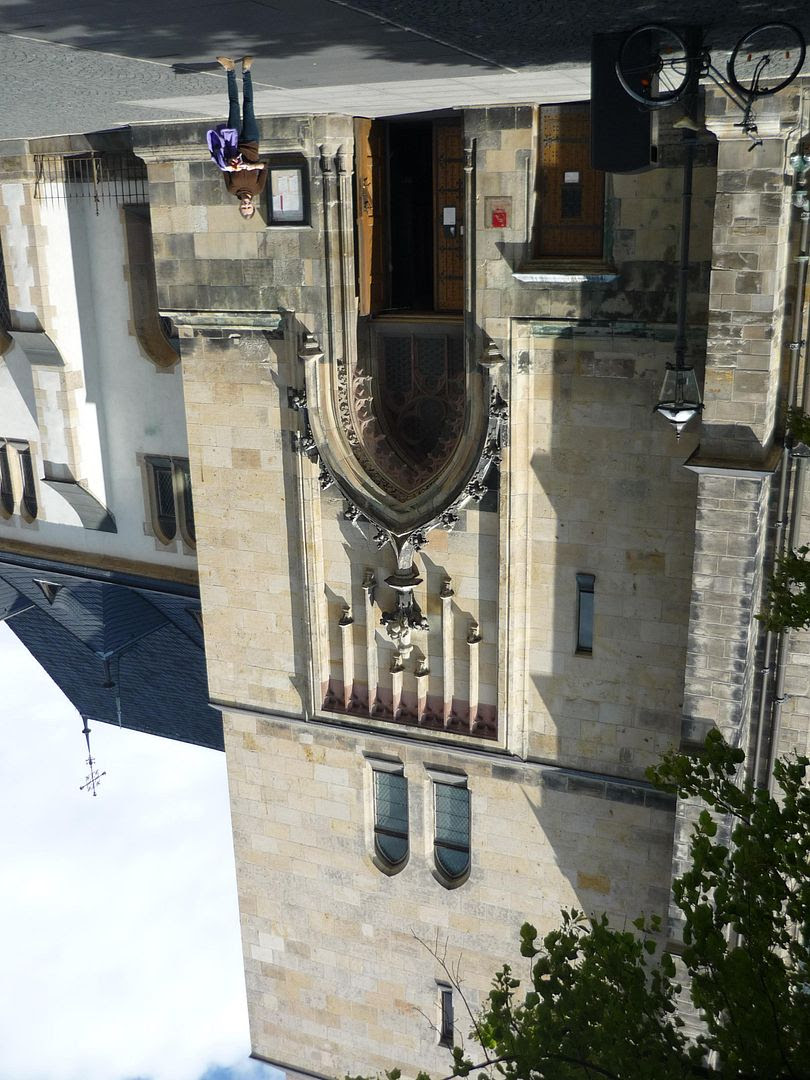 I held Michael's currywurst while he went into the Thomaskirche, which houses Bach's grave. 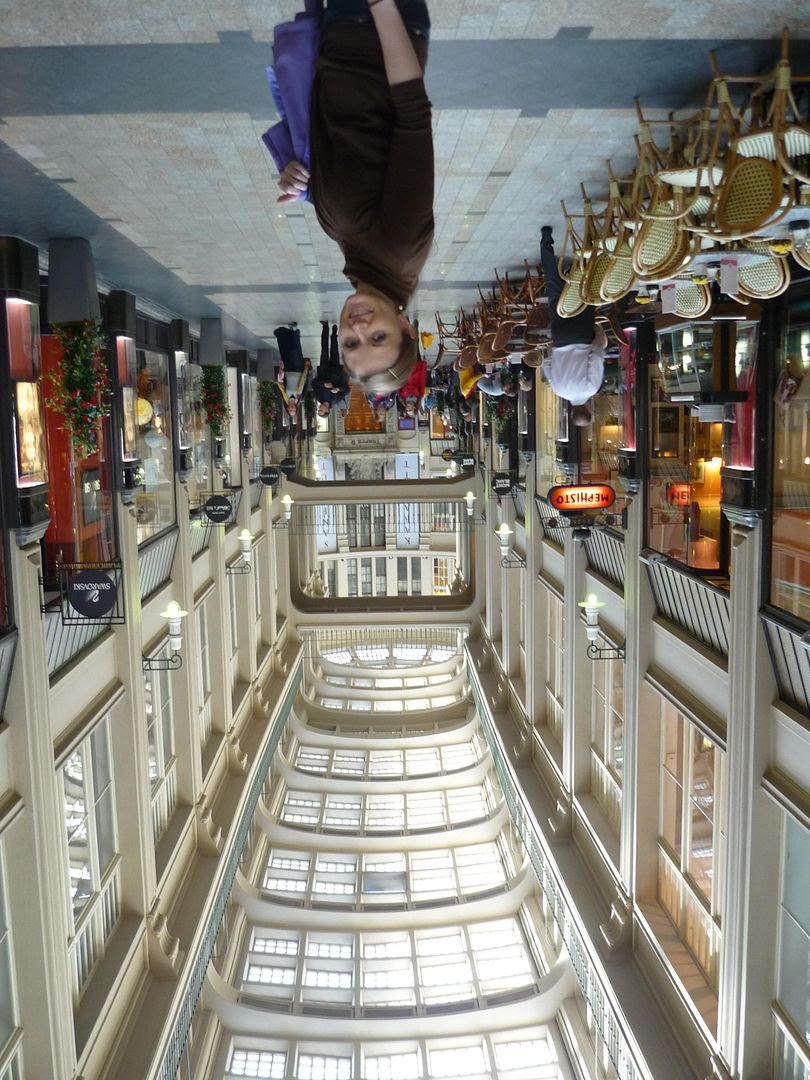 This is one of Leipzig's many passages. 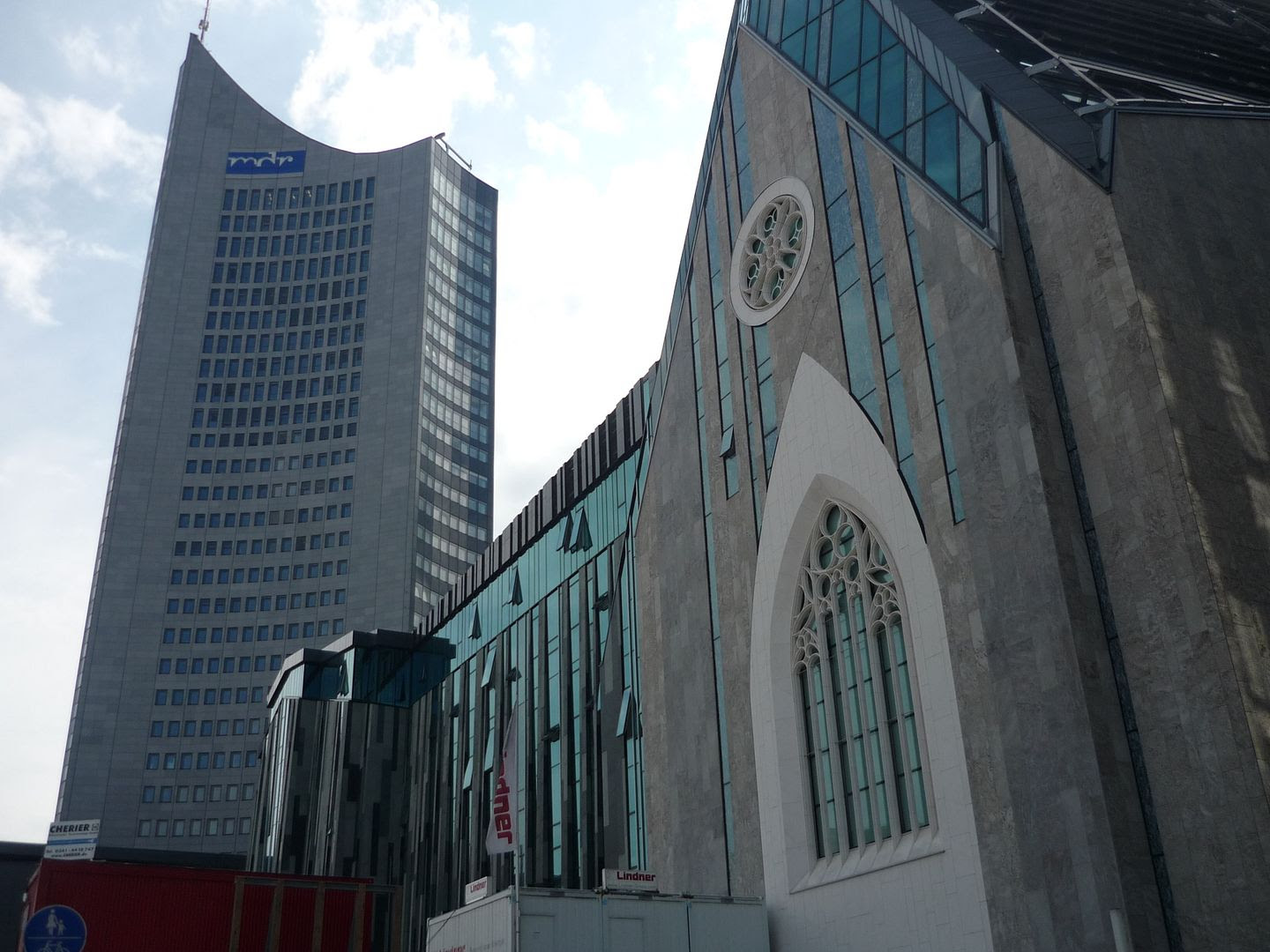 Here is the Paulinerkirche (which is more complete than it was last time I was here, but it's still not completely finished) and the easily-recognized MDR building.

Kristin and I had ice cream at the completed Höfe am Brühl mall. It was crazy to see all the places that have changed since I was last in Leipzig. 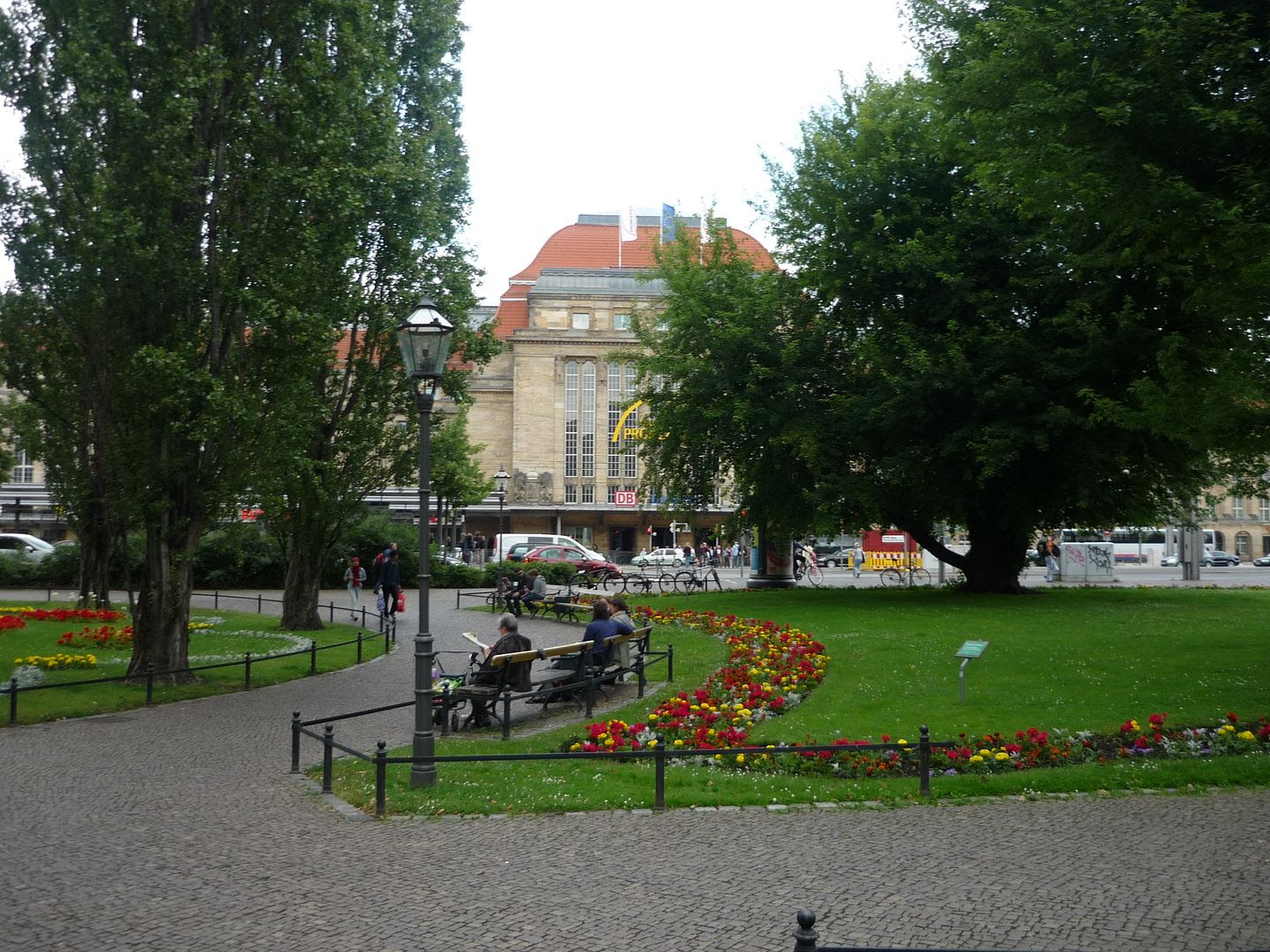 The garden in front of the main train station is nice. 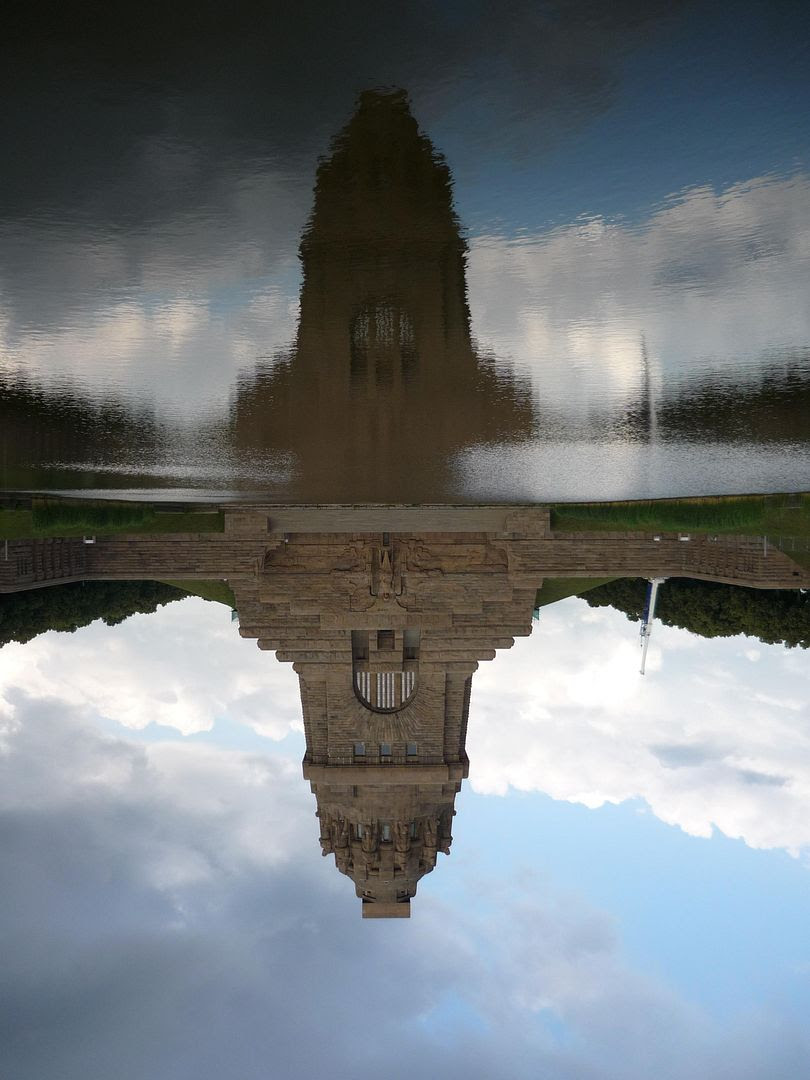 This is the Monument to the Battle of Nations, which memorializes the battle between Napoleon's troops and those of many countries 200 years ago wherein more than 100,000 people died. It was about to rain when we got to the Völkerschlachtdenkmal. 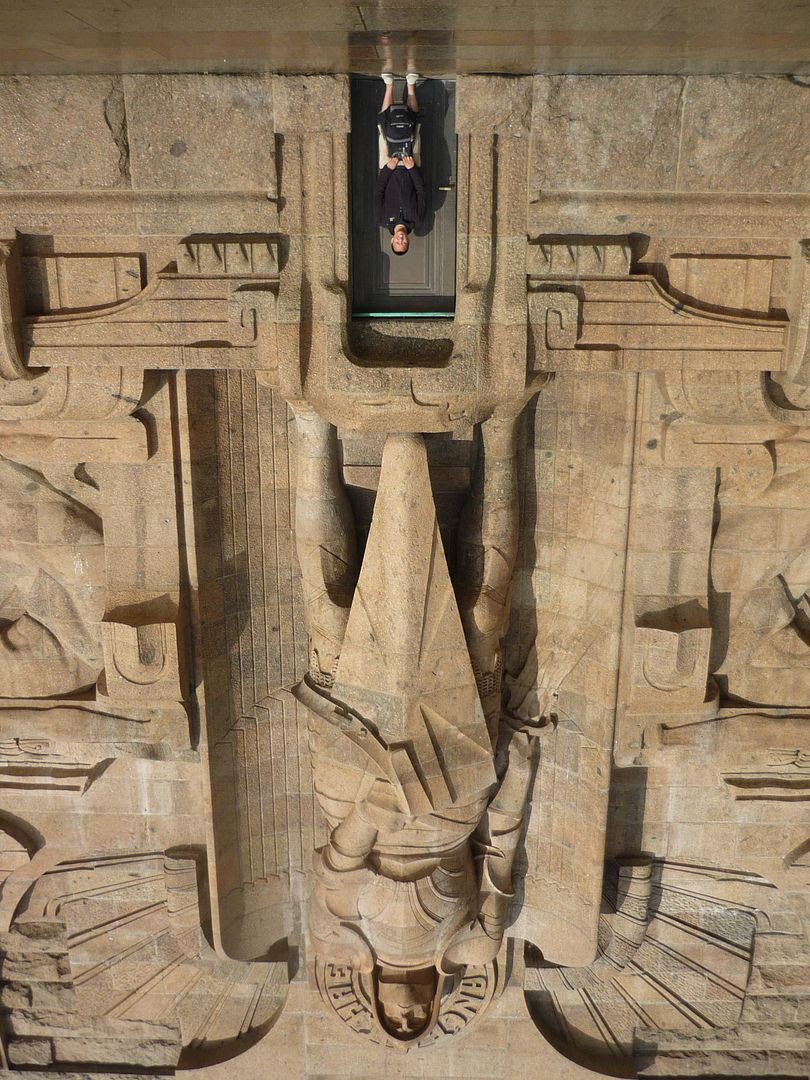 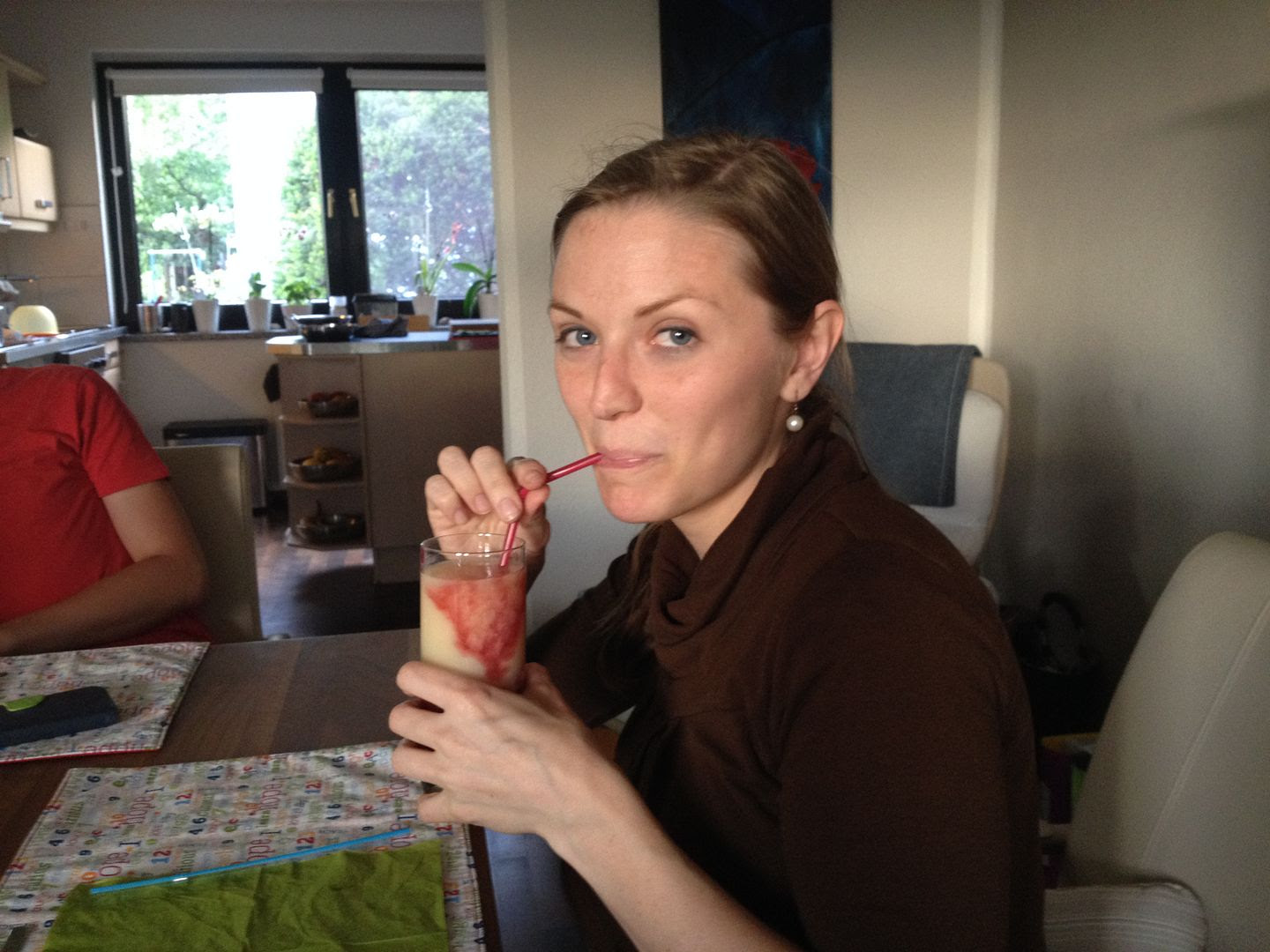 I had my first genuine Kiba-Saft (cherry banana juice) in four years!

I've missed Geertje's sense of humor. She and her family were so nice to feed us my favorite German meal (normally reserved for winter months) of Rouladen, Klöße, and Rotkohl. Wow. Again, Michael loved it. 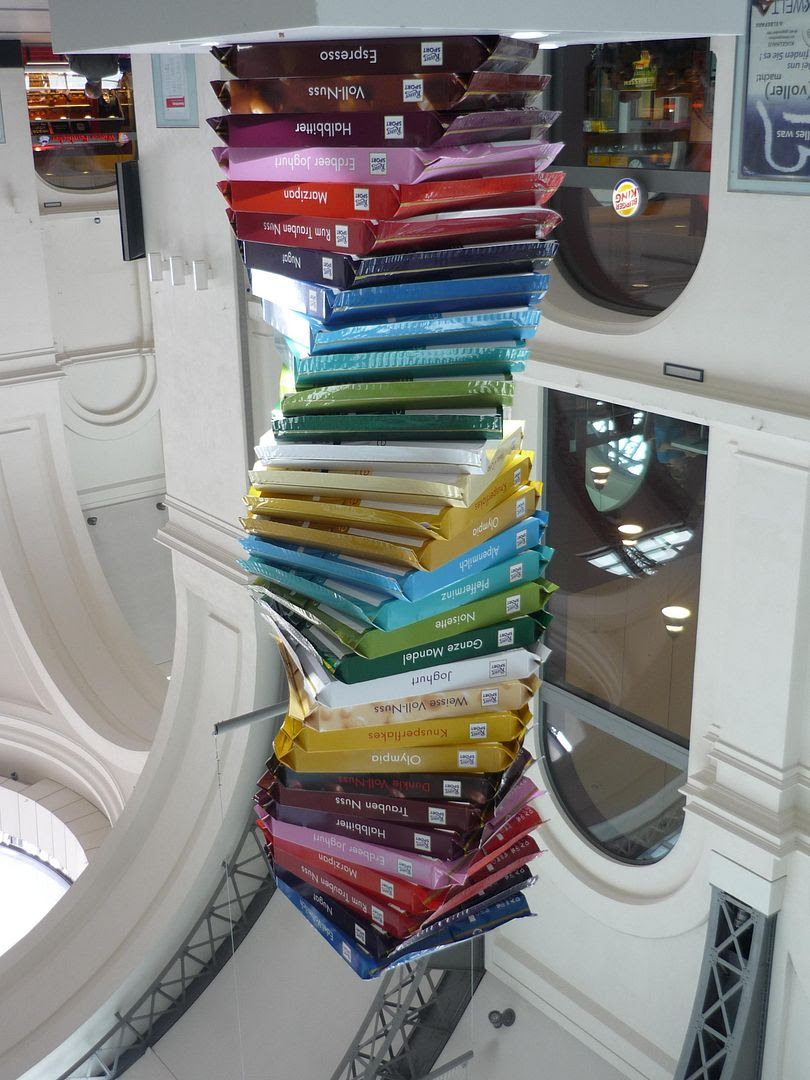 Any country that has a giant display of chocolate bar flavors wins a prize in my book. This is in Dresden. 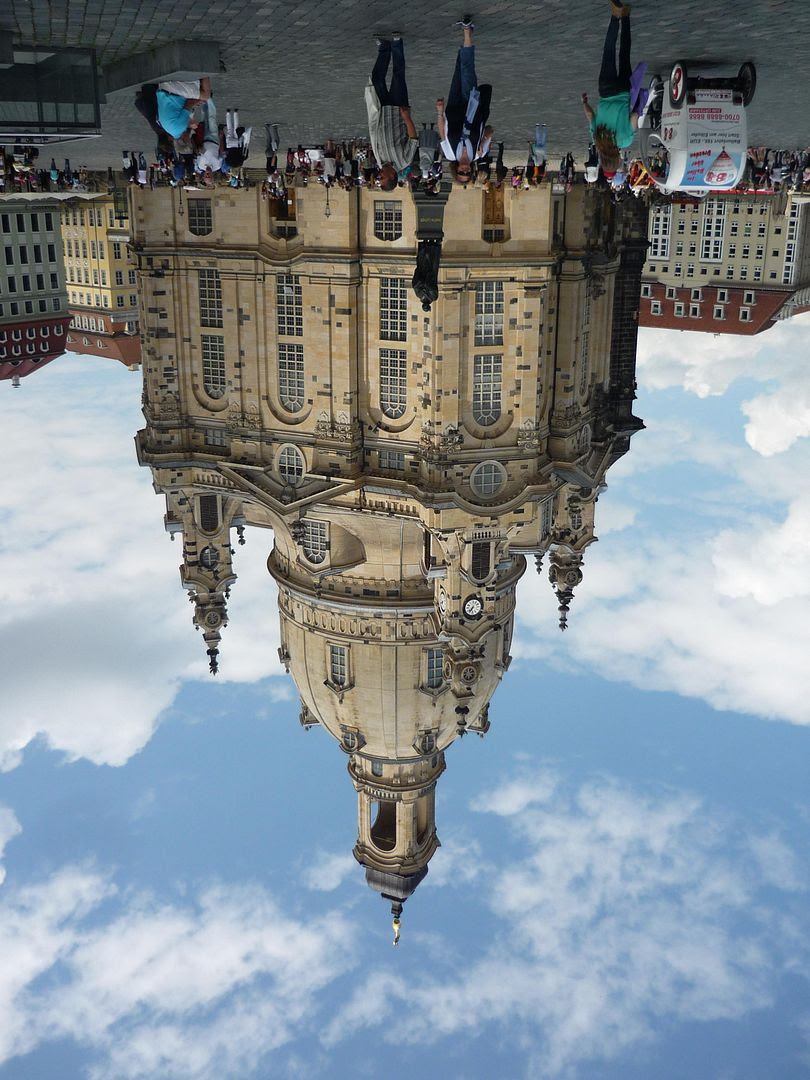 Even though we only stayed for a few hours, Michael took a lot of pictures in Dresden, as I knew he would. This is the Frauenkirche. World War II bombing took out the church and you can see all the bricks that were re-used in the reconstruction because they're darker than the others. 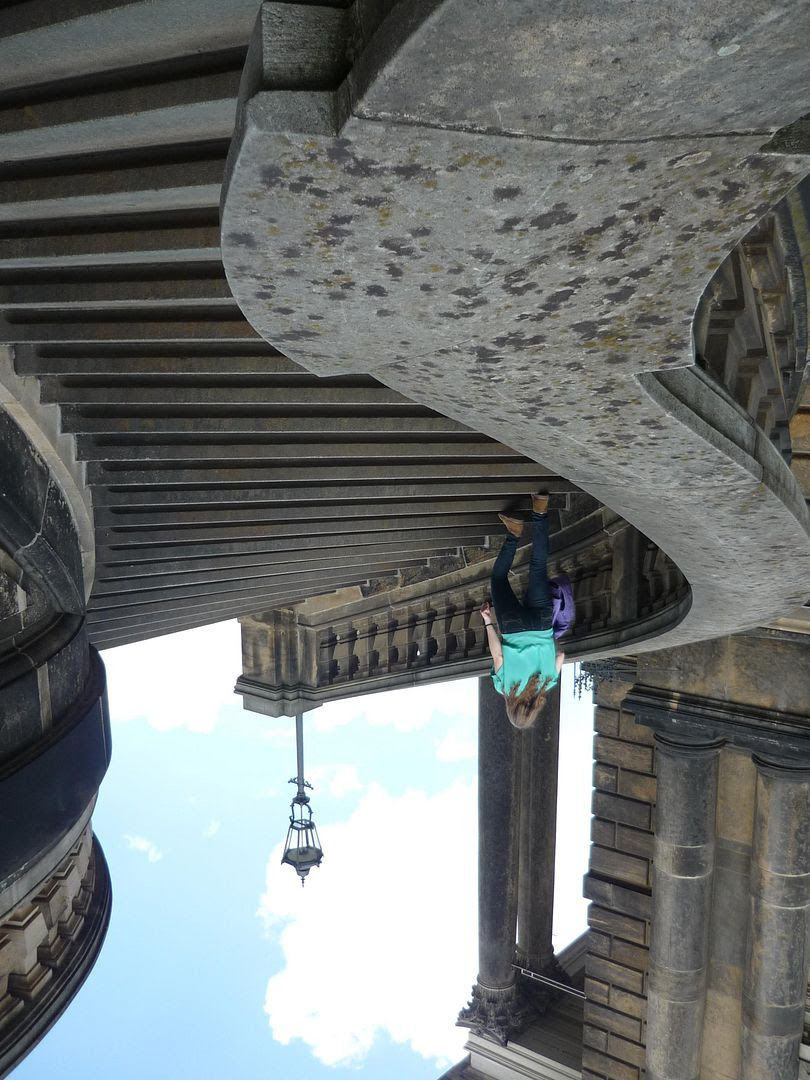 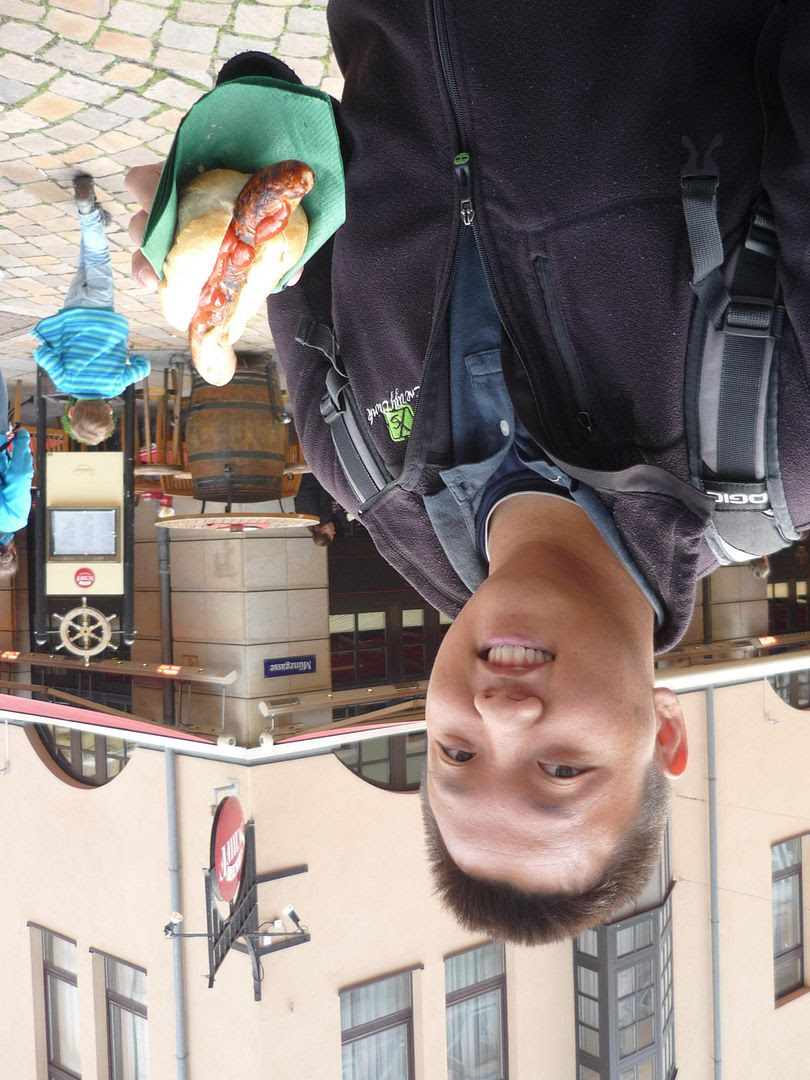 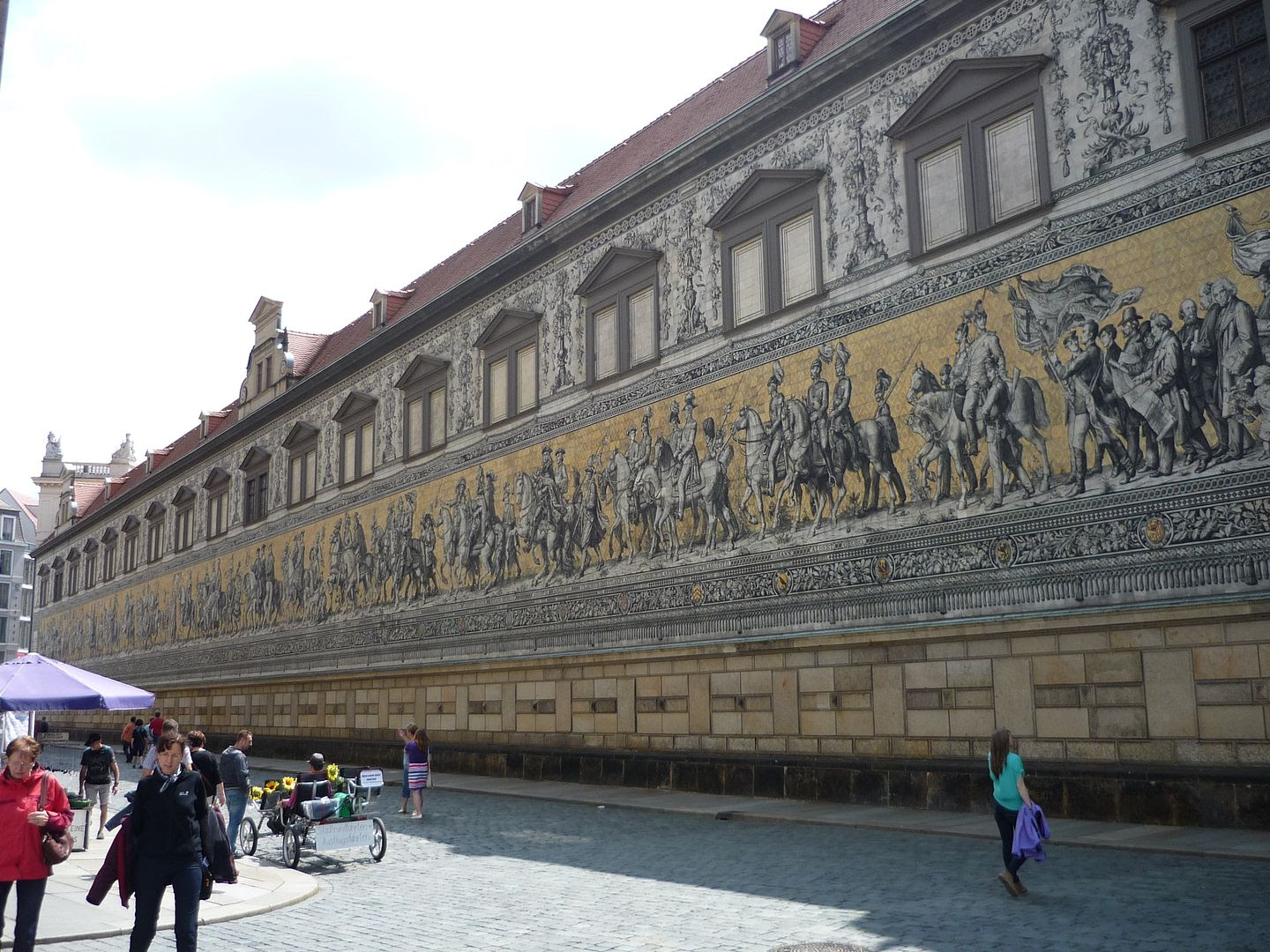 This is the Fürstenzug, a mosaic showing Saxon rulers between 1127 and 1904. My favorite is Frederick the Bitten, who was called that because, according to the stories, his mom bit him on the cheek at the pain of parting. 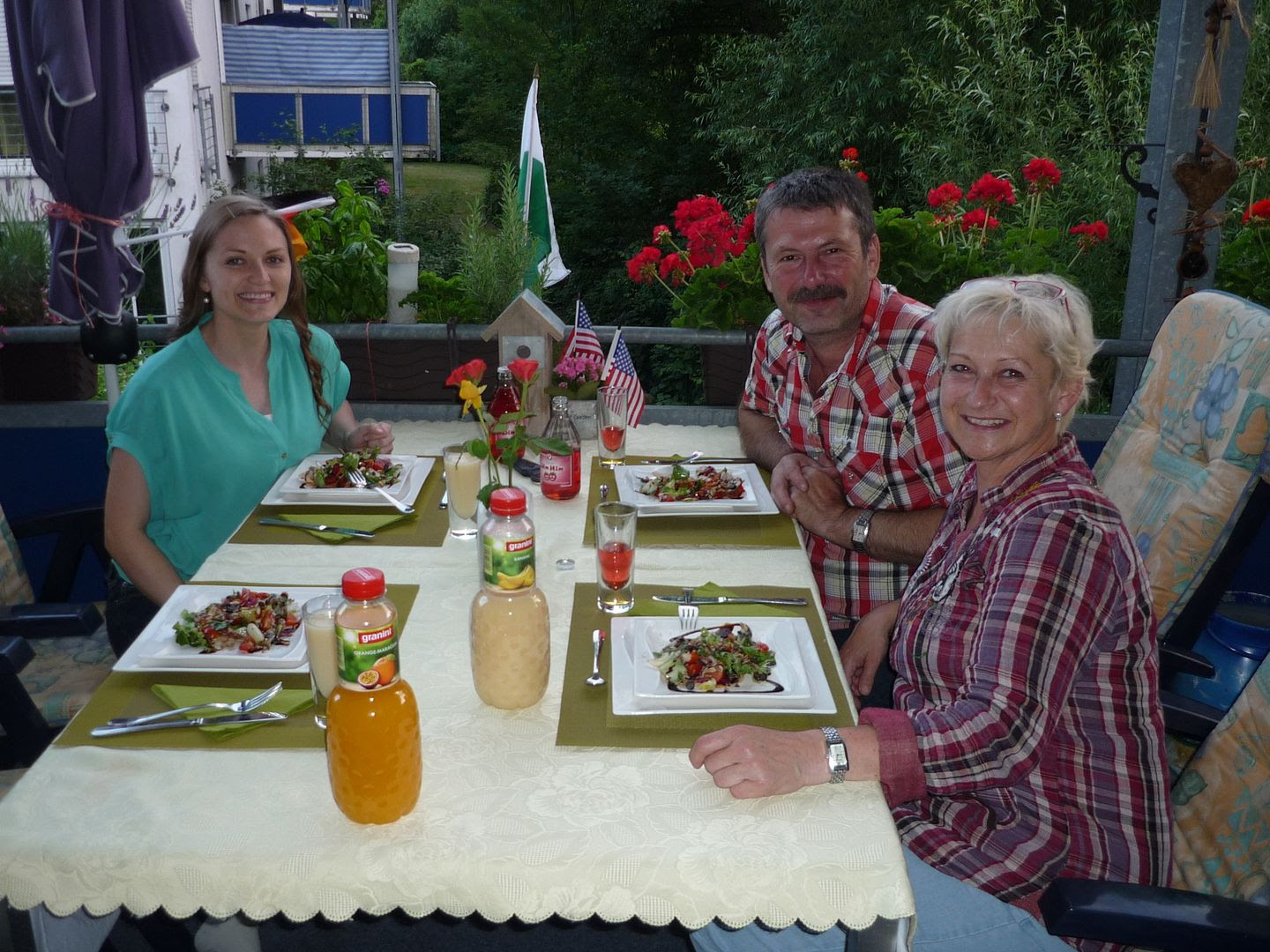 Seeing Dietmar and Sylvia made my heart warm, and Sylvia's cooking was, as always, amazing. I loved hearing about their latest travel adventures. They really loved seeing bears in Canada.

We also spent some time with the Bertholds, who treated us to an amazing lunch, and with Susen in her wonderful garden, drinking water with red currant berries and mint leaves. 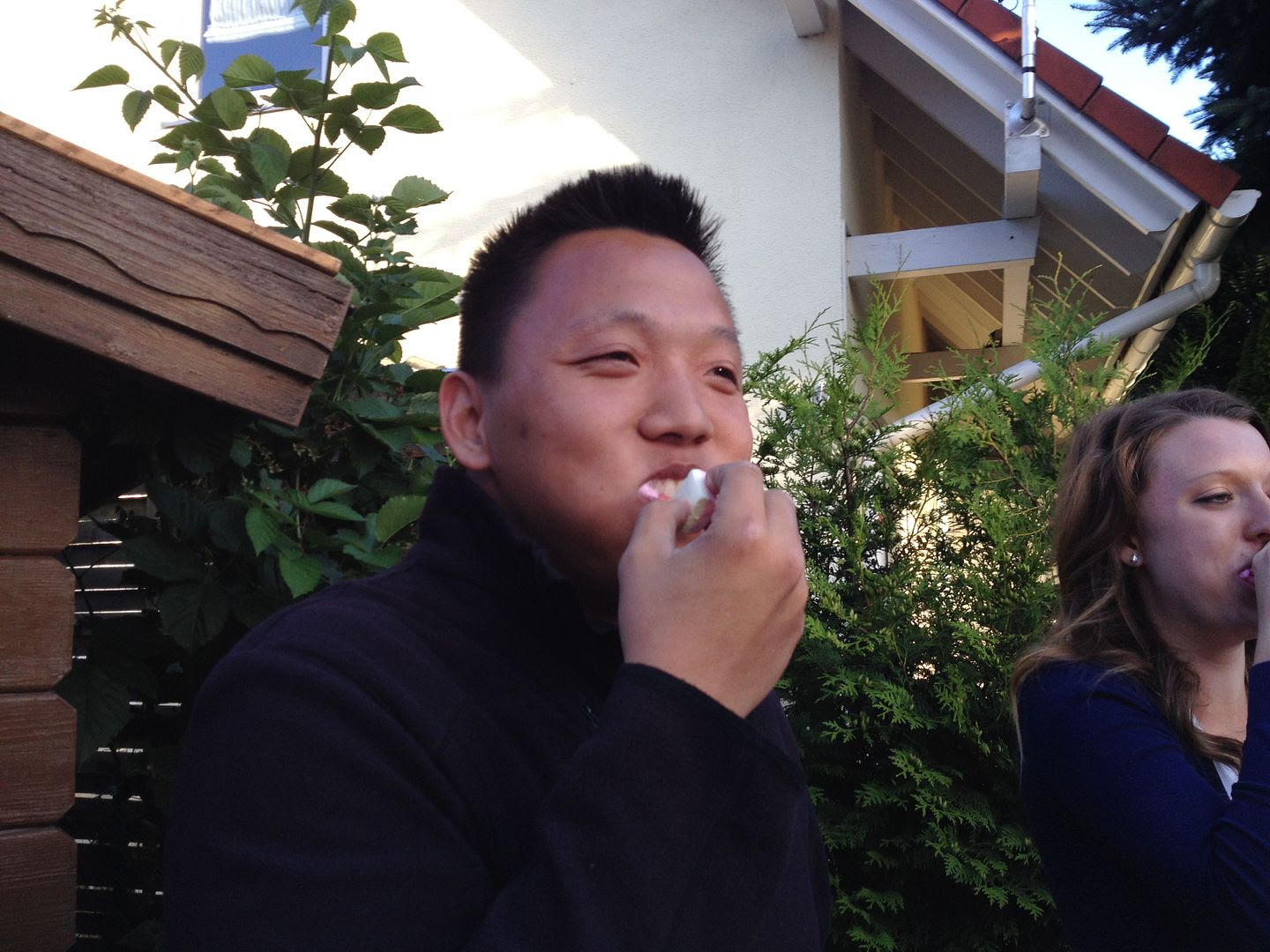 We were lucky to be there on the day that the Beyriches had their famous American Independence Day celebration, so Michael got to participate in the chubby bunny game with the missionaries. I was really happy to see Annegret again; we became good friends while I was one of her visiting teachers. 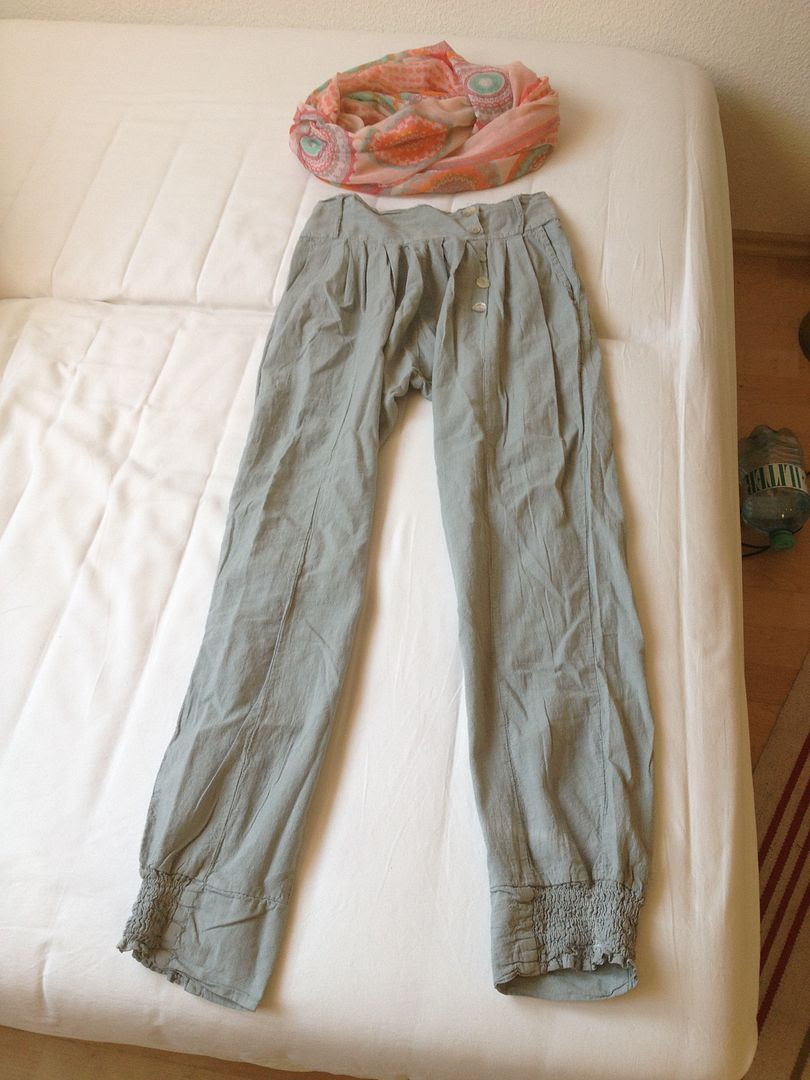 Michael left early-early the next morning to go back to San Francisco and start our apartment search. I went shopping and found this scarf and these summery harem pants that bring out my hippie side. I like that they are comfortable and casual but dressier than my usual attire. Later I spent a lot of time seeing my friend Eva, and then even later, Camilla and Lars.

On my last morning, I had breakfast with my friend Stefanie and her two kids, and then we enjoyed some time together at the park.

Other items of note: 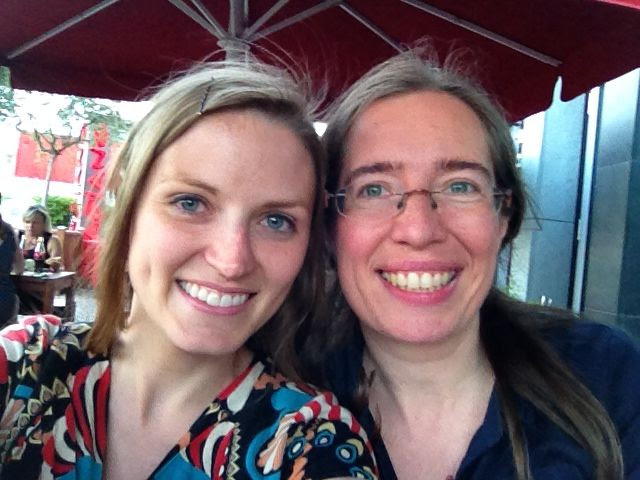 My last evening in Leipzig, my friend Dani took me to Vapiano. They make the food right in front of you and I think we both really enjoyed it. Mostly I was just really glad to spend time with her. She's one of those people I always feel up to talking to, you know what I mean? Also, it was awesome that when she went to grab us some dessert, she came back and said, "I just realized that I still have my slippers on." At least they were Crocs. ;) And while we were eating, Germany won another game in the World Cup!

I was sad to leave my beloved Leipzig. 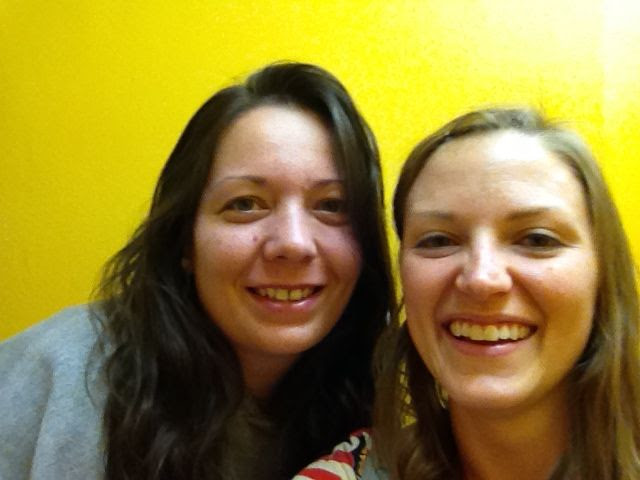 I took the bus to Berlin, where people were still celebrating the win. Unfortunately I ended up feeling grossed out and violated because some drunk guy swiped his hand across my neck. If I'd had time to think, I probably would have kicked him. Happily I met up with Susanne, a German friend I met in Fremont, California. She cooked some dinner for us and she and her roommate let me stay in their tiny student apartment for a few hours until I had to leave for the airport to head to Russia. Can you believe how good we look at 3:30 AM? 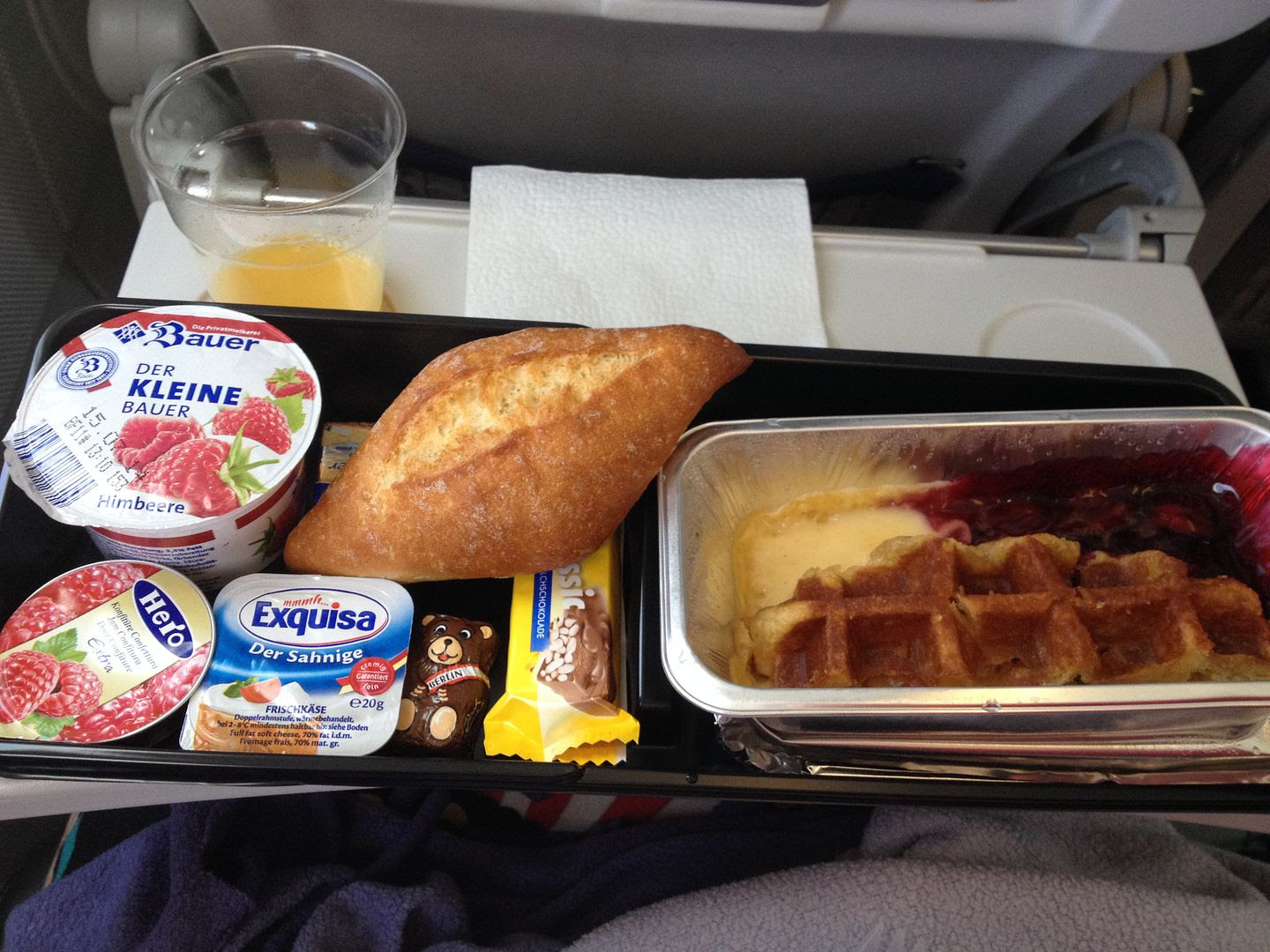 There were some crazily-drunk German soccer fans still on the streets while I was getting to the bus to go to the airport, and when I got to the airport, the counter didn't even open for another hour. But Lufthansa knows how to do breakfast, I tell you. I had yogurt, cream cheese and raspberry jam for a roll, a granola bar, cherries and cream waffles, and last but not least, a piece of chocolate.

I am so happy I got to see and to introduce Michael to Leipzig/Germany and so many friends. Hurray!

Next up: a trip to Russia with three siblings and two siblings-in-law.
Email ThisBlogThis!Share to TwitterShare to FacebookShare to Pinterest
Eingestellt von Michelle Glauser