I went to Russia with my older sister Amy and her husband Paul, my younger brother Jeff and his wife Lindsey, and my younger sister Sica. Luckily for me, Amy has great trip-planning skills and Jeff speaks Russian.

Since I didn't want to fly all the way to the States and then back to Russia, I met them in Moscow right after my trip to Germany.

Getting to the hotel by myself was interesting. I asked about tickets and directions to trains a few times, but not once did I hear anything I recognized. Then I discovered that Moscow's metro is seriously lacking as far as signage goes. Even if I could understand Russia, I would have struggled, because the labels for stations are against the wall, behind the train, so you can't see where the train is going or where you've arrived. I ended up standing by maps in the metro and counting stops with my fingers. It's funny how when you don't know the Russian characters, your mind tries to make connections anyway. I remember thinking that I needed to transfer at the stop that looked like it started with "Unctble." The letters were "Чистые пруды," which I later learned is "Chistye Prudy."

The subway trains were really deep underground (I think one of us timed the escalator at over 1.5 minutes) and soooo hot. At least the stations were really neat, with fancy ceilings and lighting. 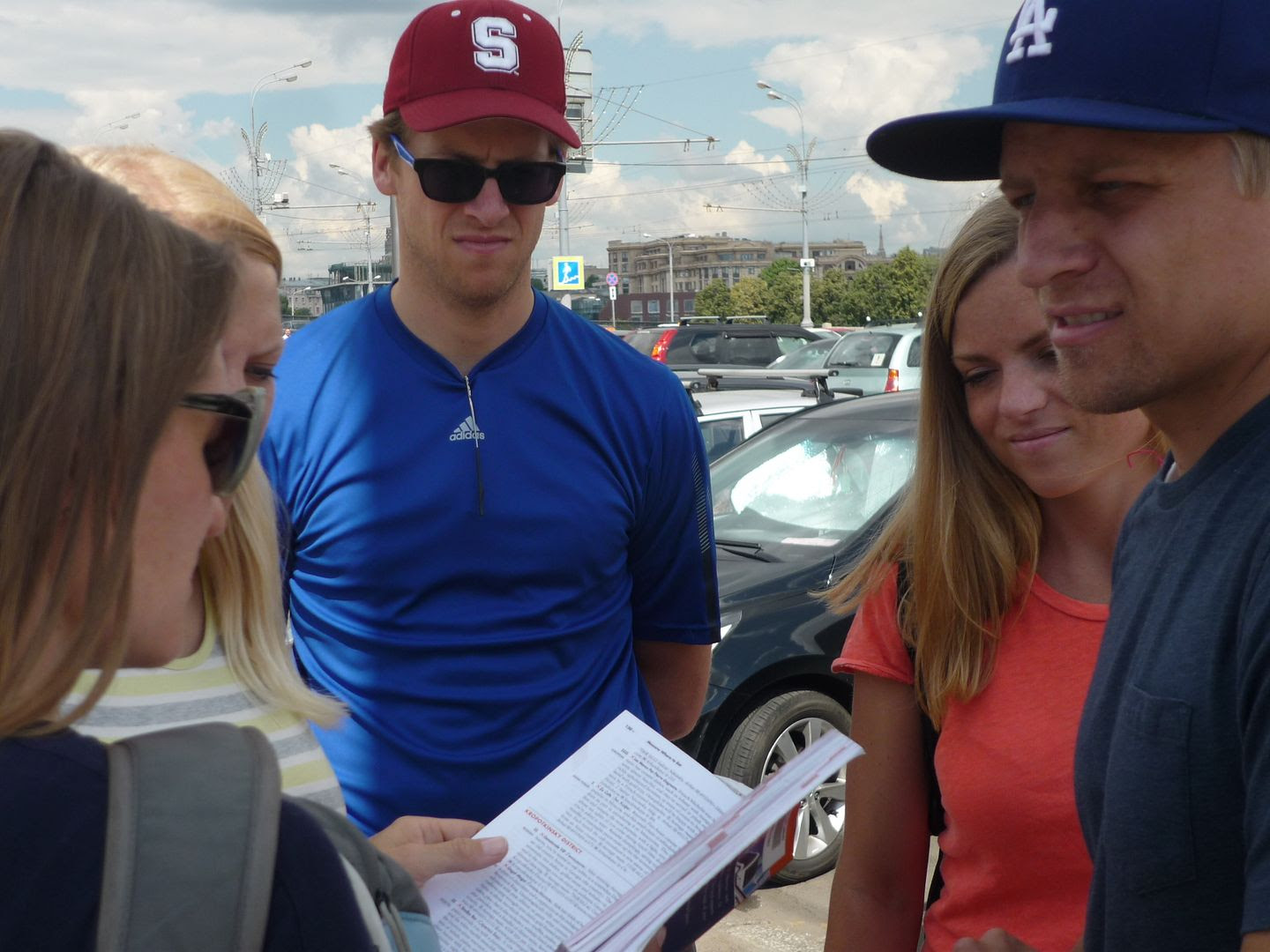 It was great to see family after a year. Amy led the way with her travel guide from the library.

Besides the great planning and leading, another really awesome thing about traveling with Amy and Paul was that they introduced me to this app called Trip Splitter that is very handy for figuring out who owes how much to whom. 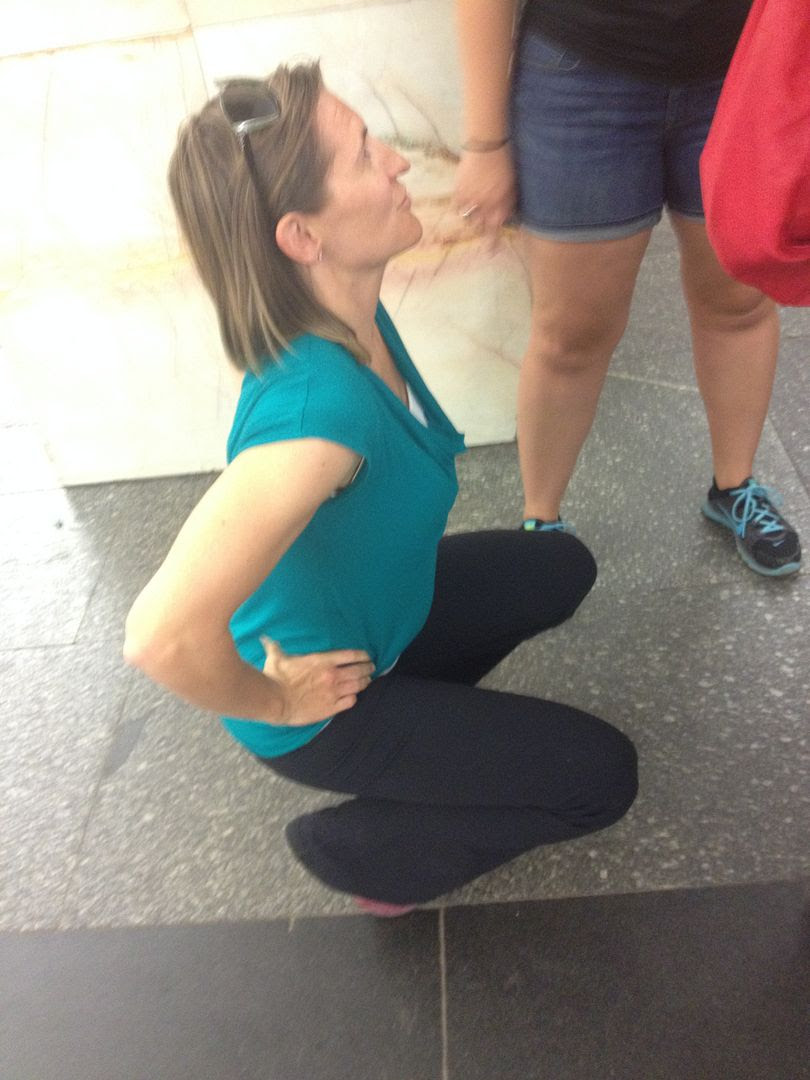 Amy told us what she'd recently been reading about alignment, and everywhere we went, she demonstrated healthy squats and stretches. 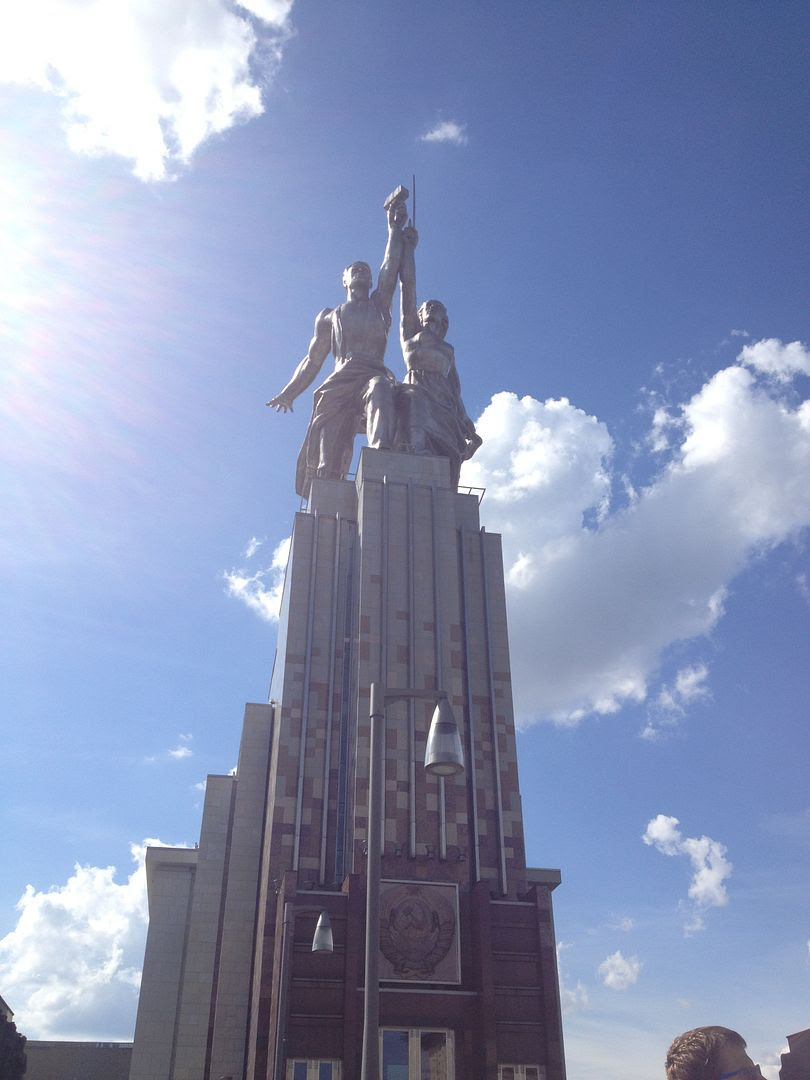 Moscow is full of large, heavy-looking buildings and statues. 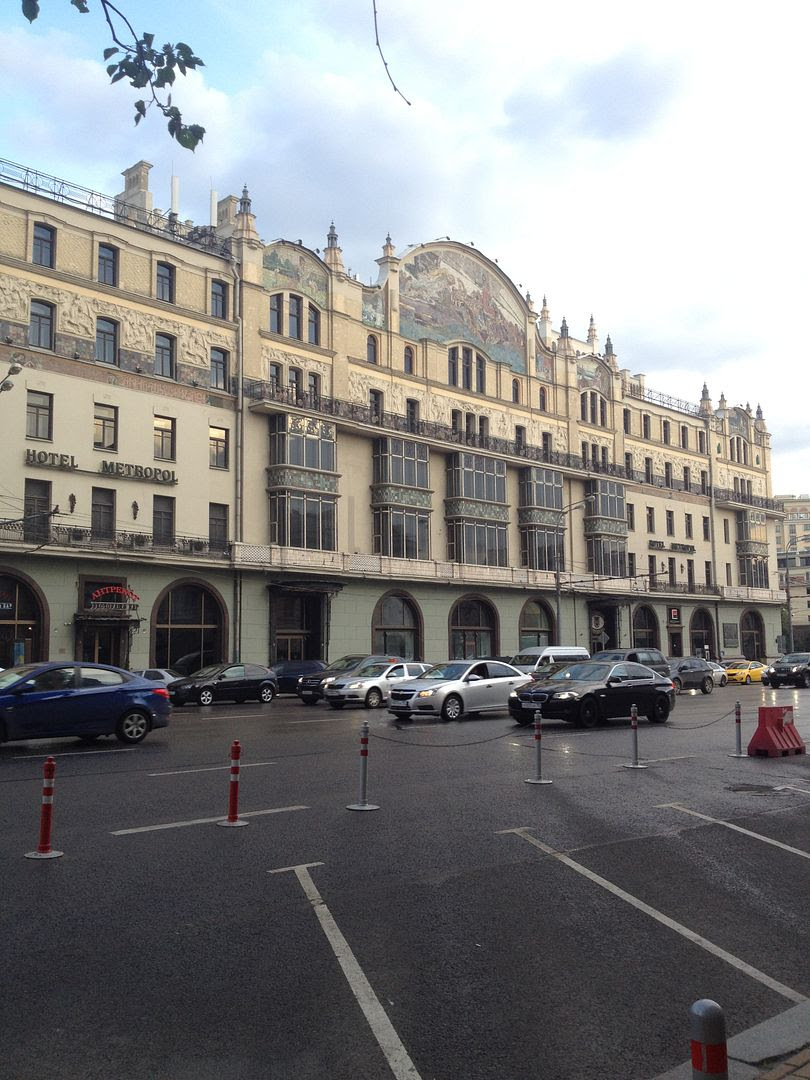 There are really wide streets and nifty mosaics in Moscow. I was surprised by how Western European Russia felt to me. 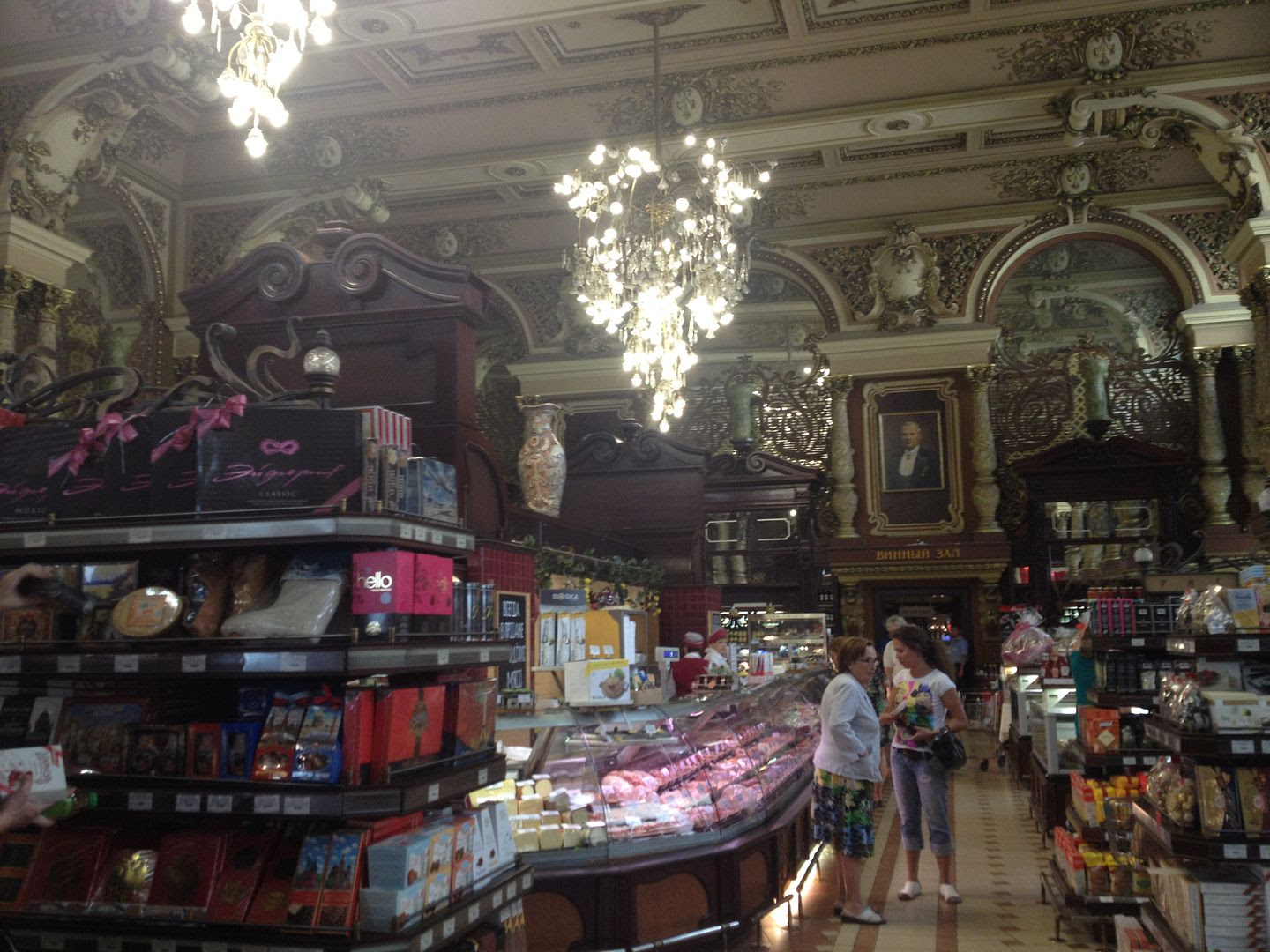 The fancy Eliseevsky grocery store was one of our first stops. I enjoyed my cherry pastry and didn't enjoy my ginger cookie. 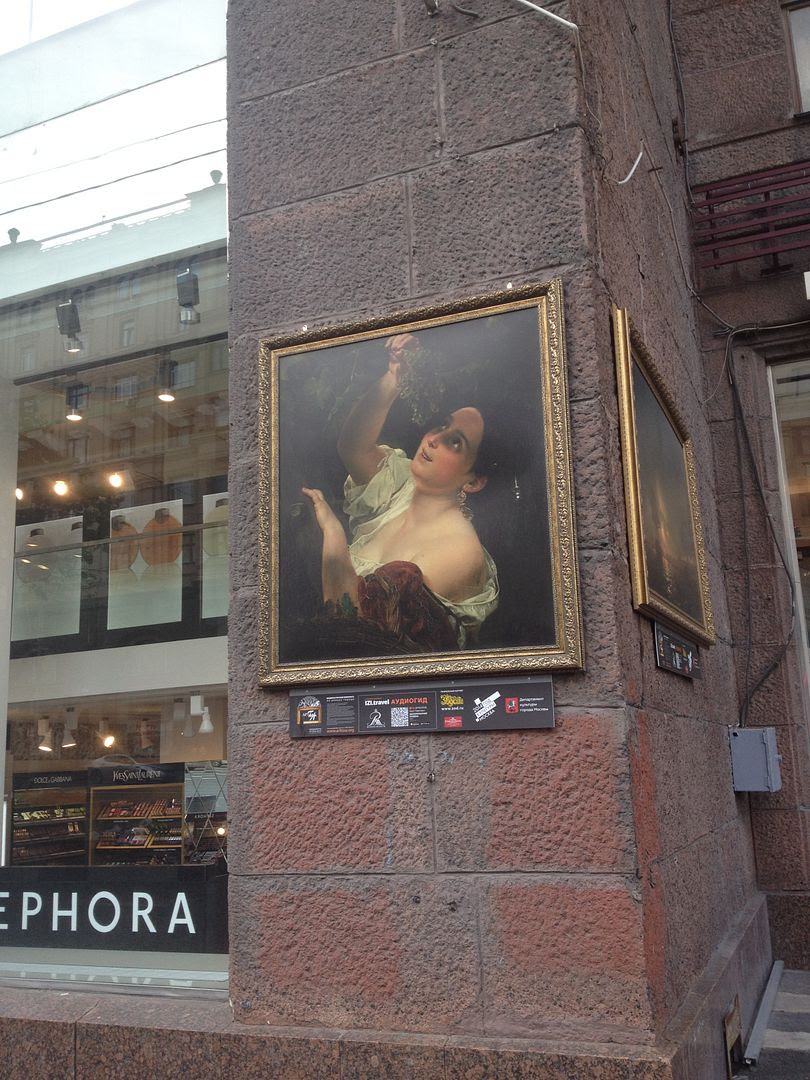 I thought it was so awesome that they have paintings on the outside of buildings—it's like the whole city is an art museum. 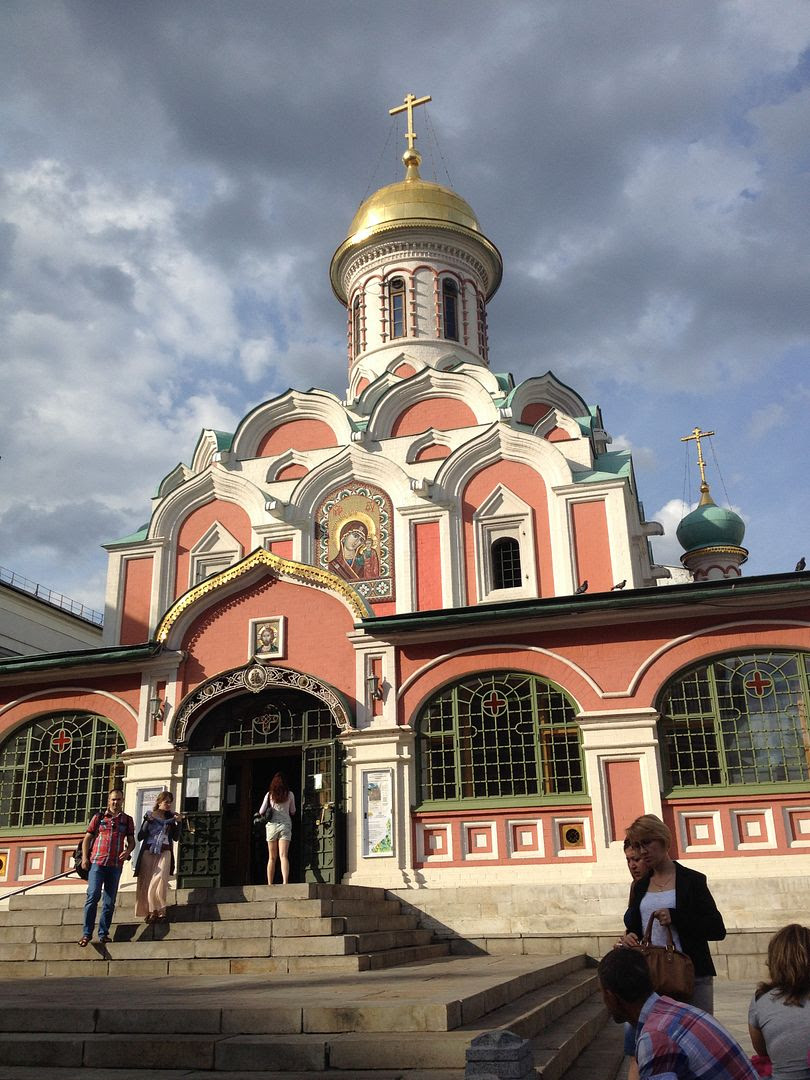 The first church with beautiful chanting that we went into was the Cathedral of the Mother of God's Kazan Icon in Red Square. I forgot my scarf to cover my head the first day, but I remembered it every other day. 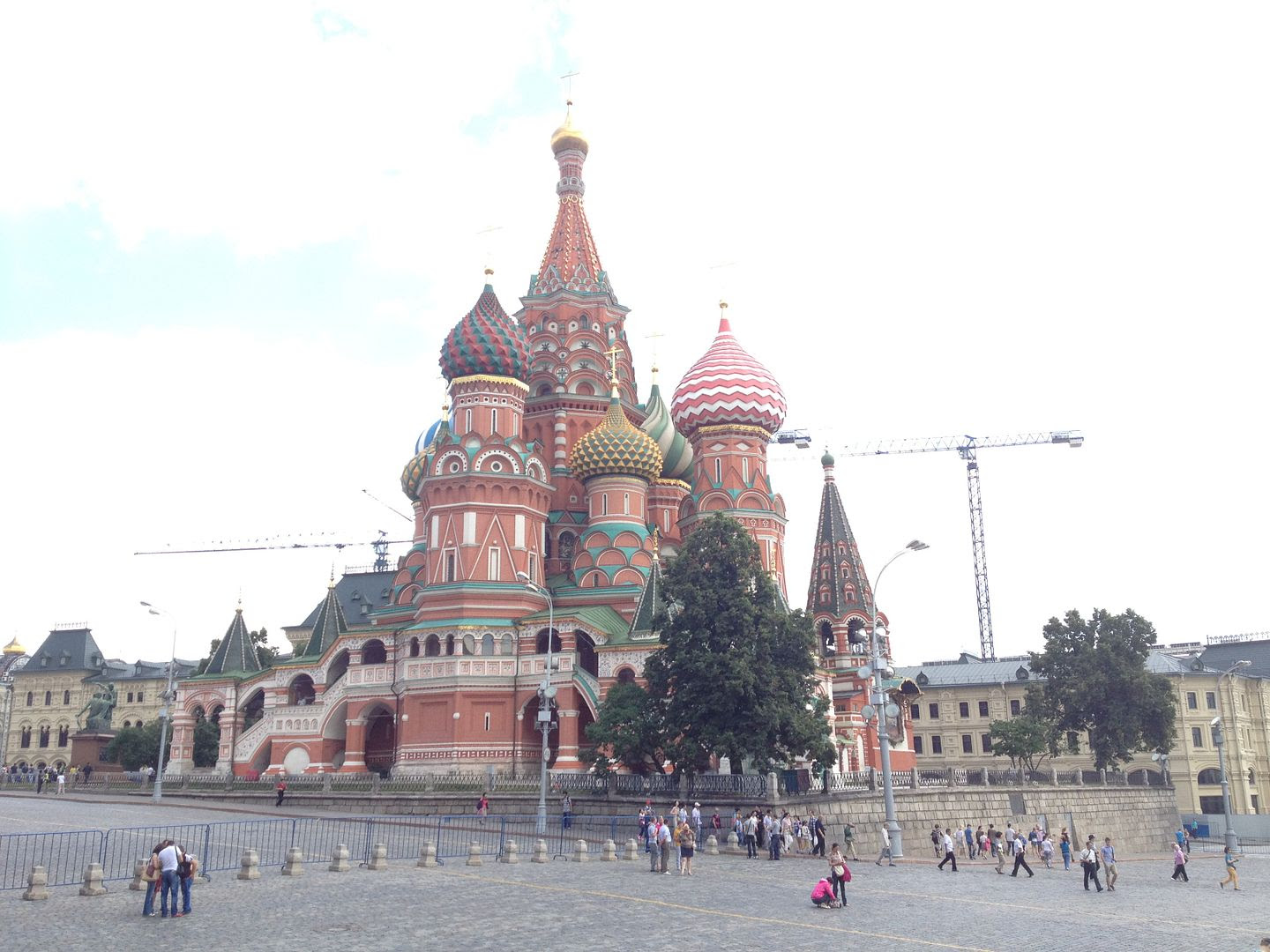 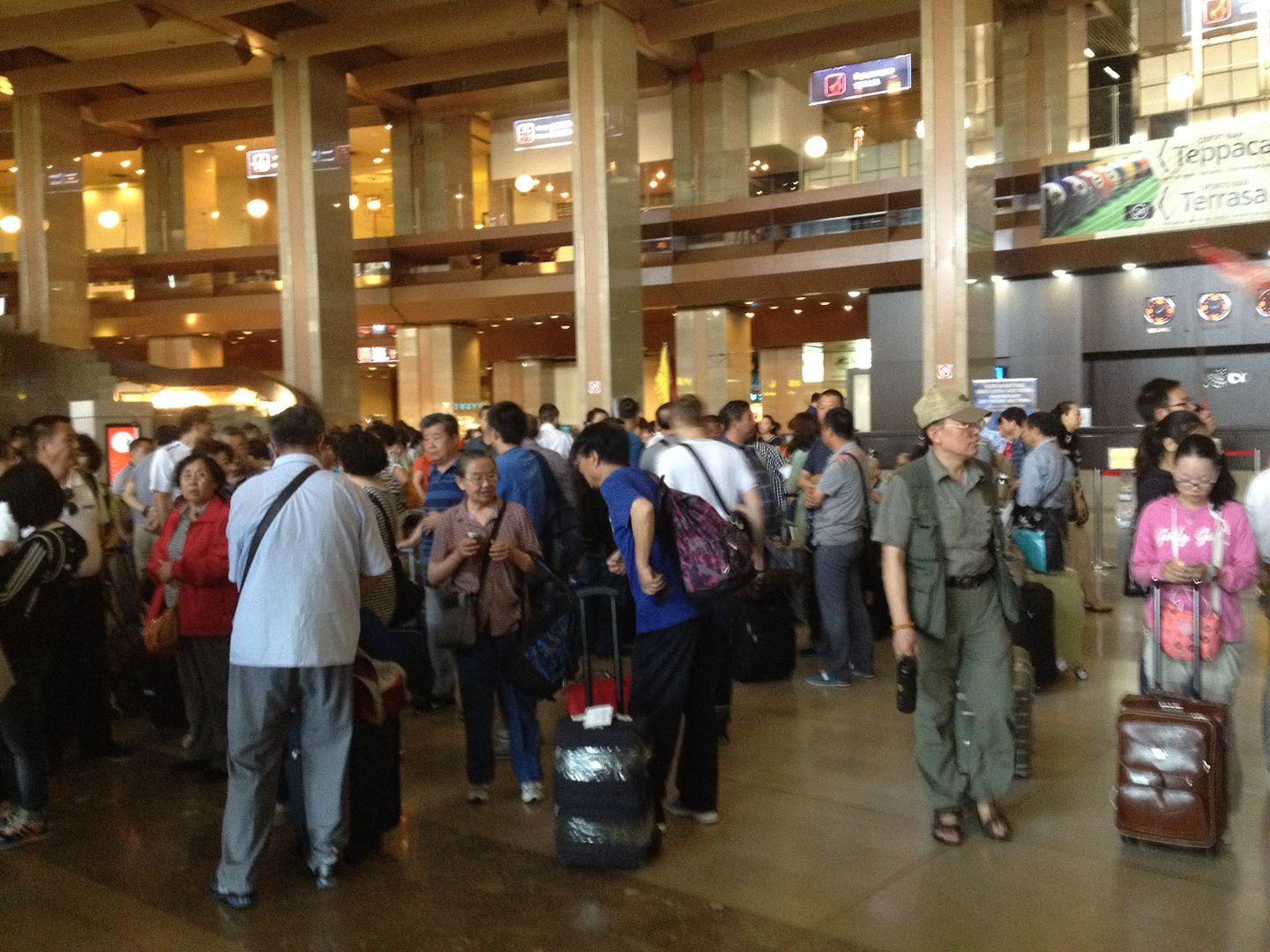 Leaving the hotel one morning, I felt like I was back in China. It makes me smile when I can recognize some of what people are saying. 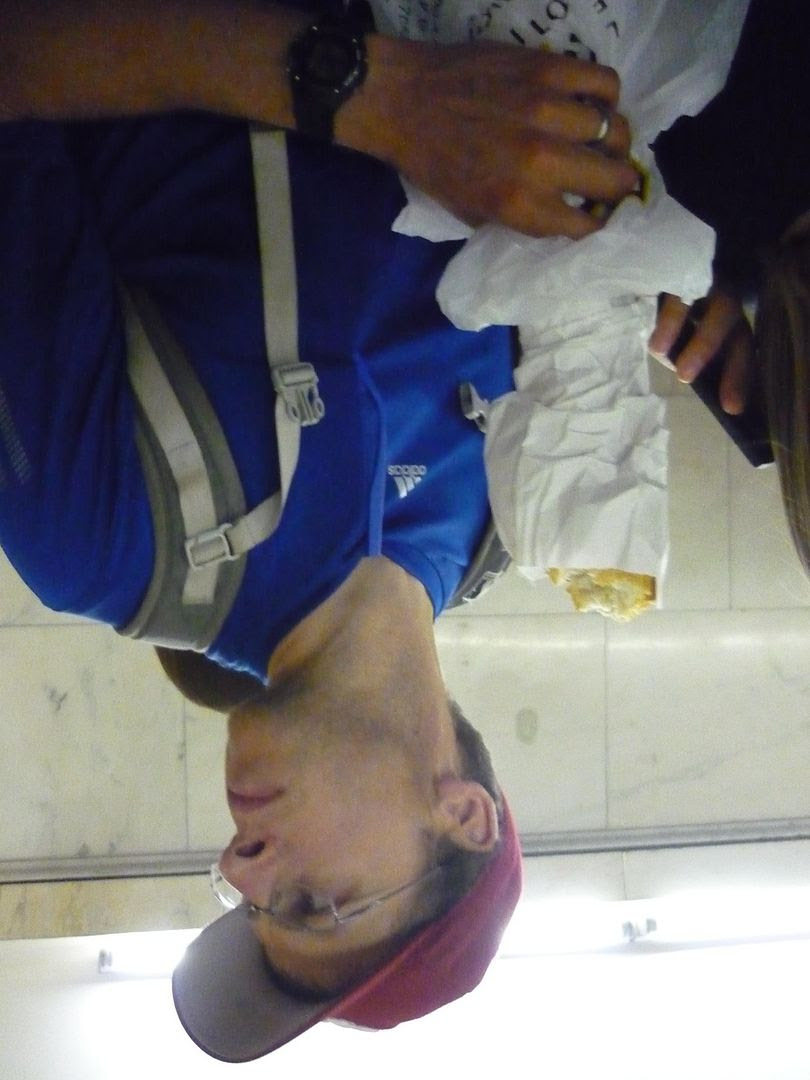 I got into trouble for taking this picture of Paul—he bopped me on the head with his baguette and got crumbs in my hair. I just love that it is so Paul: he's wearing a t-shirt, a watch, a baseball cap, and his backpack, he has his phone in one hand and a baguette in the other, and he's got his concentrated look on his face. That's my brother-in-law. 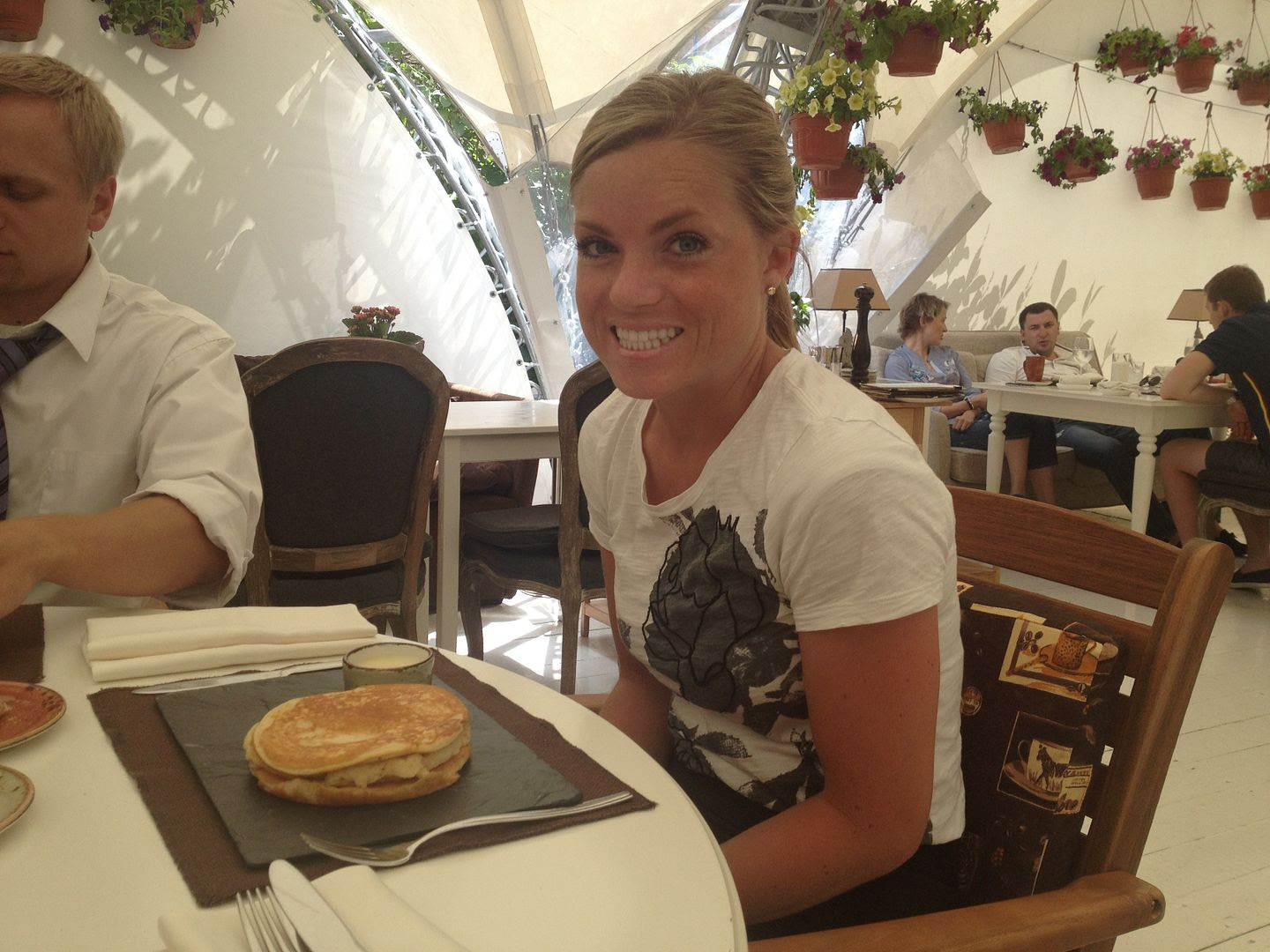 We liked the posh-looking outdoor tent at a recommended restaurant called "Vatrushka," and everyone who went and hear the artificial bird tweets piped into the restroom were impressed, but the food wasn't so great (some of the bread even had mold on it). Lindsey was smart because it's pretty hard to go wrong with pancakes.

After Sica and Amy ordered lemonades, I saw that the drink list said lemonades cost about $30 USD. Whoa, what?!? I thought my math must be wrong, but nope. Luckily our bill charged us closer to $10 each, but even then, we joked about the "expensive lemonade place" for days. To be fair, Amy said it was indeed the best lemonade she'd ever had. 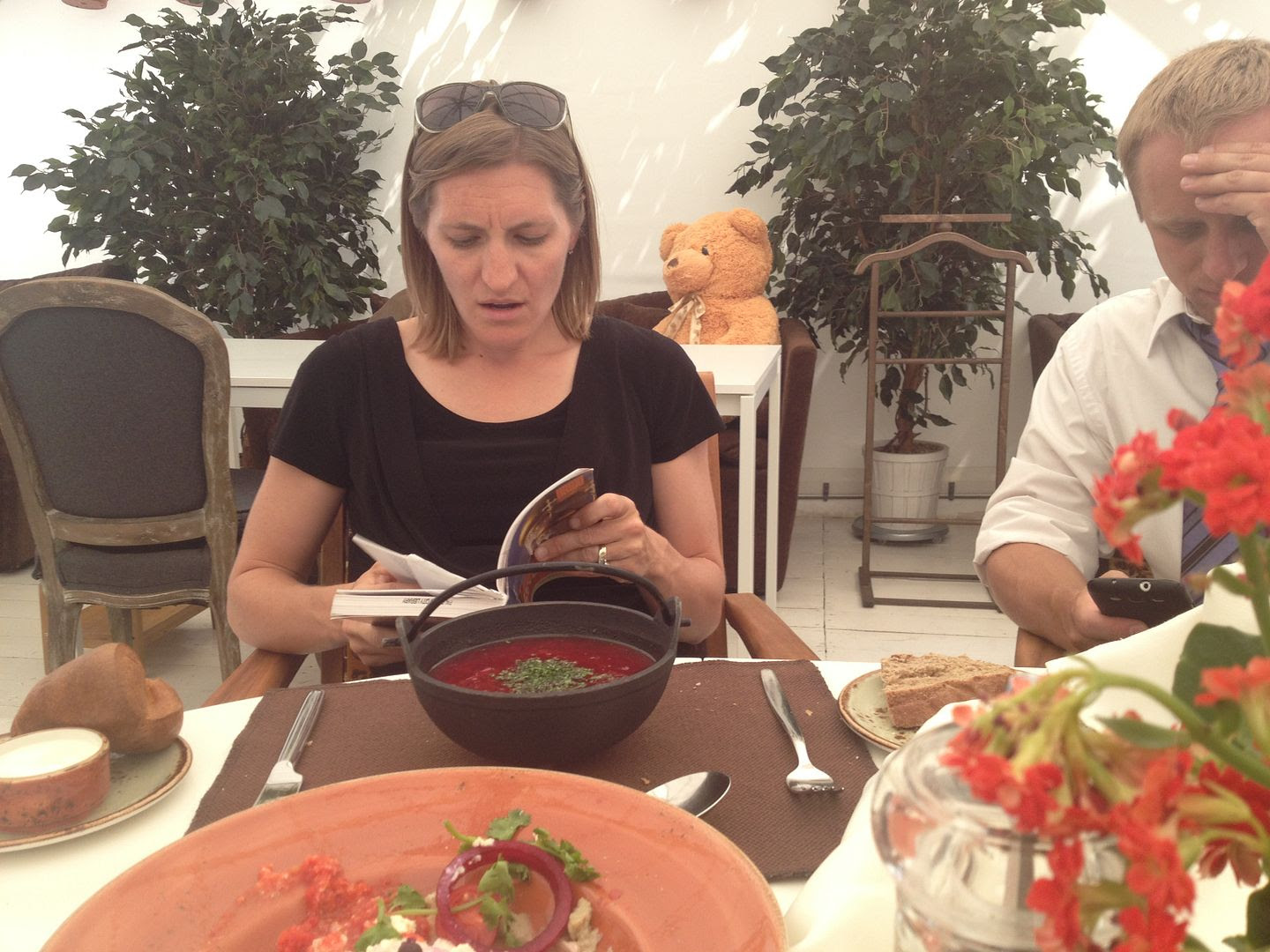 Here's Amy waiting for her borscht (which was actually quite good) to cool off and wondering why the travel book suggested eating at Vatrushka.

We went to a Gulag Museum, where Jeff translated for a woman who told us all about the history of labor camps. 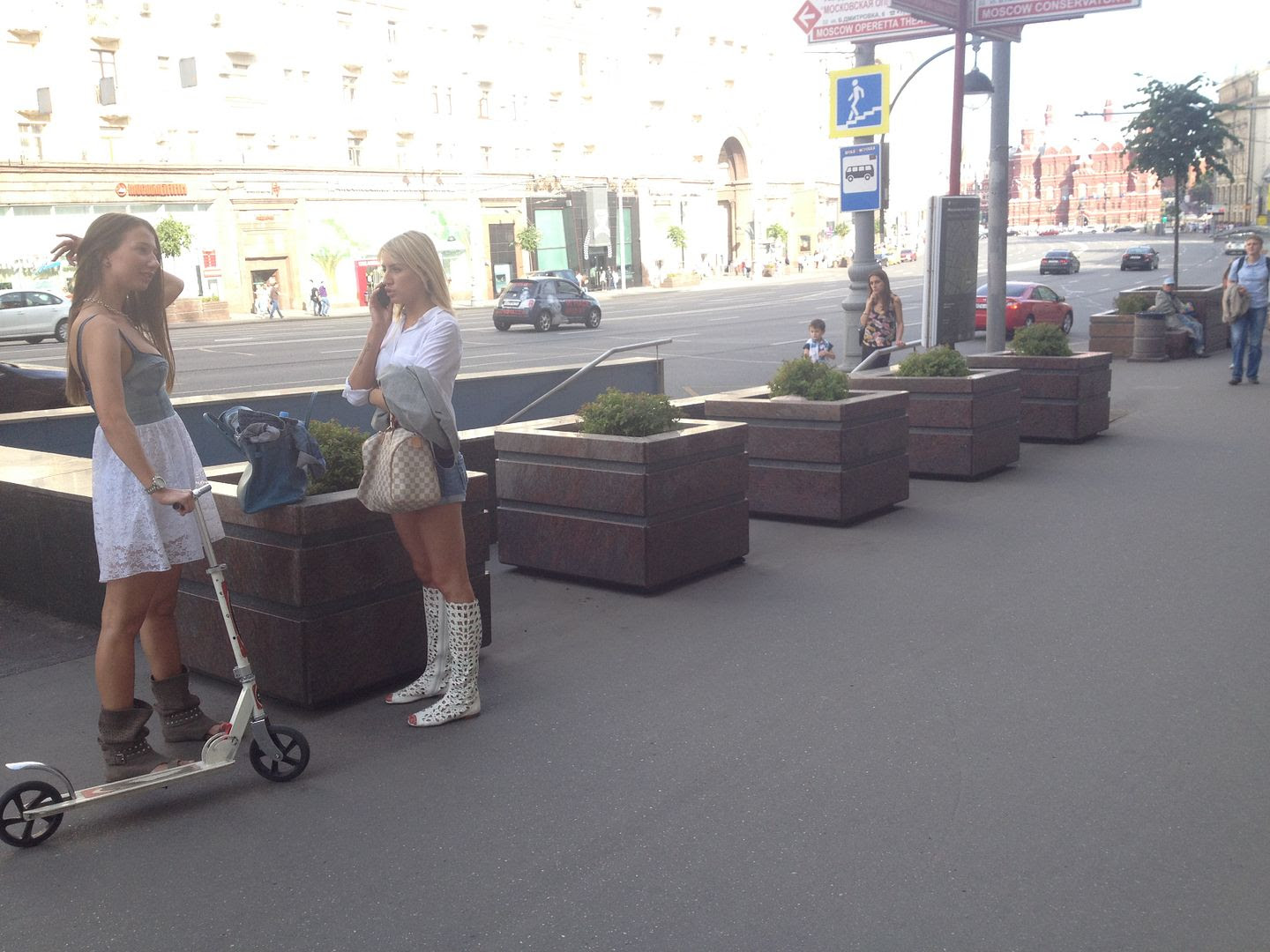 When I think of Russian winter fashion, I think of white boots, but I saw some even in the hot summer weather. 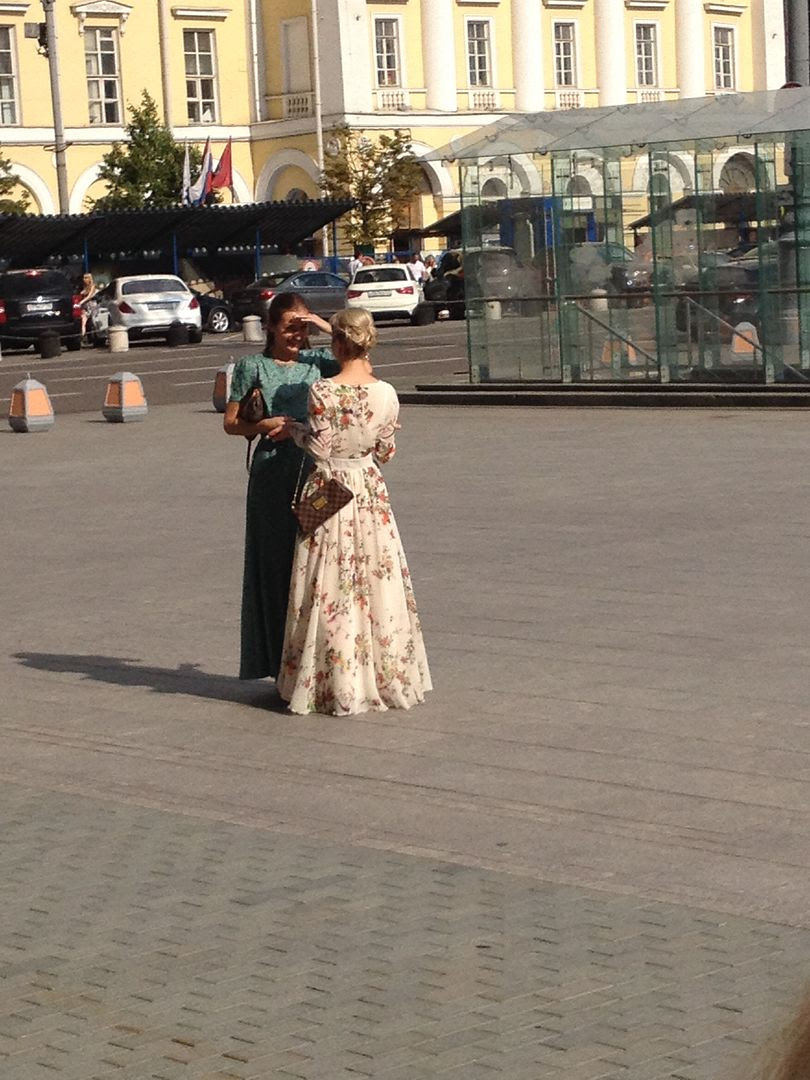 What I really loved were all the long, lovely dresses I saw women wearing. This is outside of the Bolshoi Theater, where the others saw a ballet. 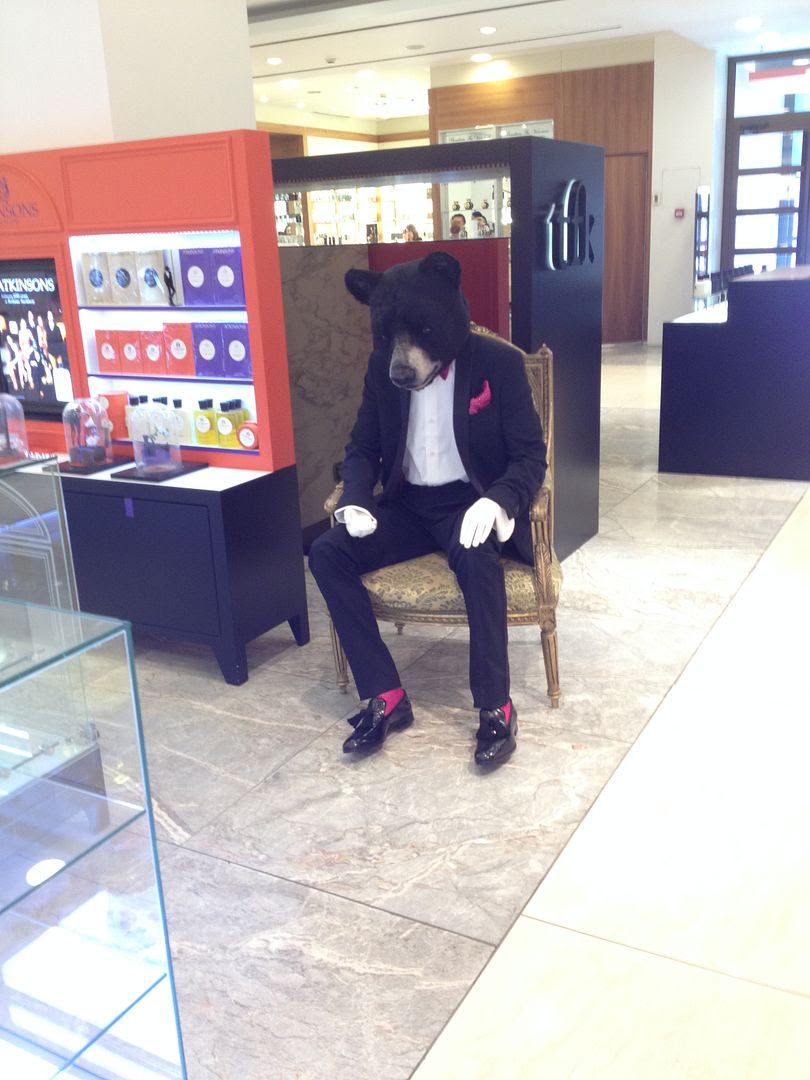 I saw this weird bear guy at the mall. 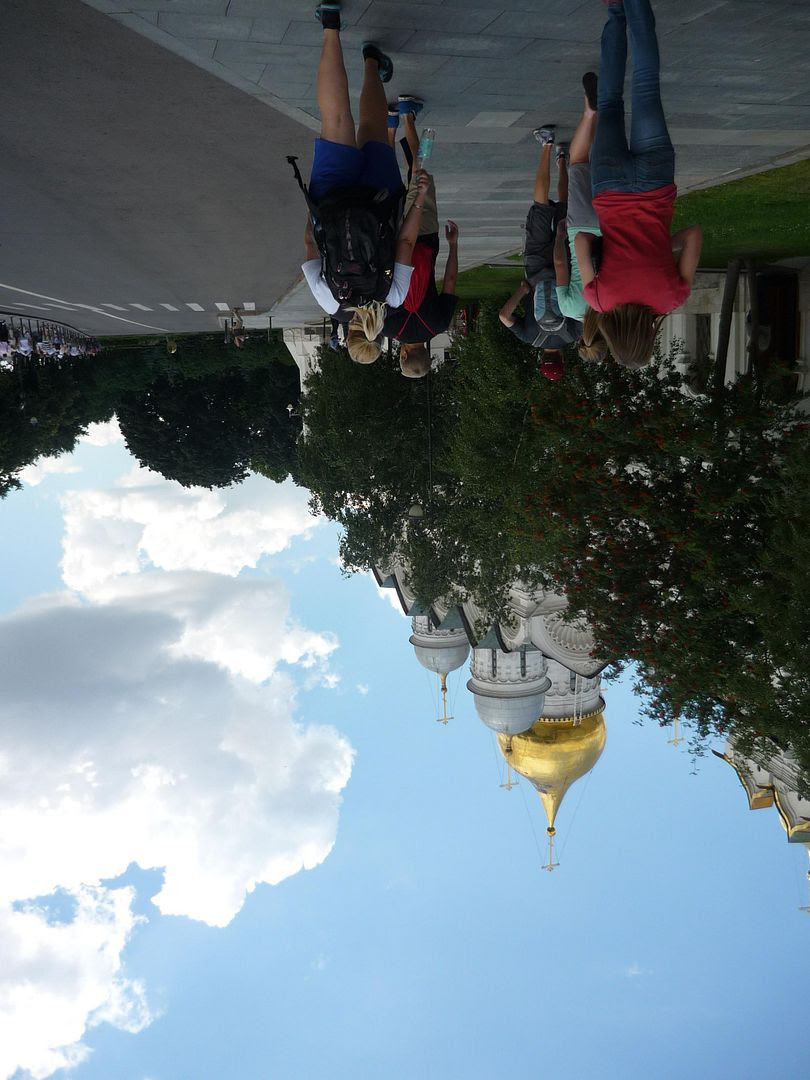 The next day, we went to the Kremlin. The Armory was my favorite. There we saw the royal Romanov jewels, furniture, kitchen supplies, clothing, and more. Apparently Catherine the Great had around 12,000 dresses, and her coronation dress had the teeniest waist you've ever seen—it was small even for a sixteen-year-old. She must have had a smashed ribcage from corsets. Peter the Great's boots were also fascinating—they were enormous. I also really enjoyed seeing the evolution of the royal carriages and sleds. The last carriage even had rubber around the wheels to soften the blow. We're fascinated by royal life, yes, but I'm sure that seeing such luxury go by in a sled or carriage when the majority of the country was desperately poor must have been frustrating. 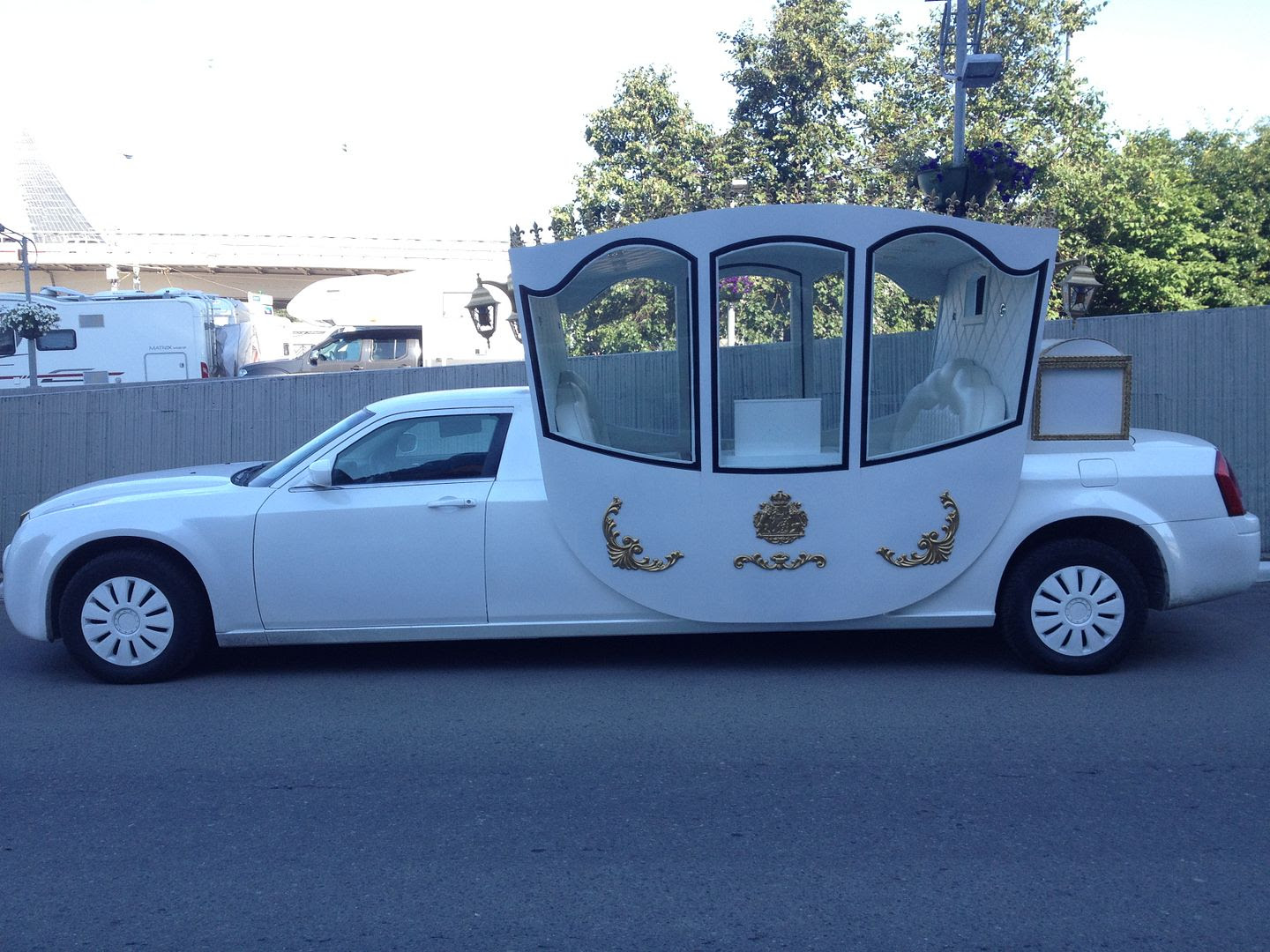 After seeing the old carriages and sleds that royalty went around in, I thought that this must be the modern version of upper-class transportation. 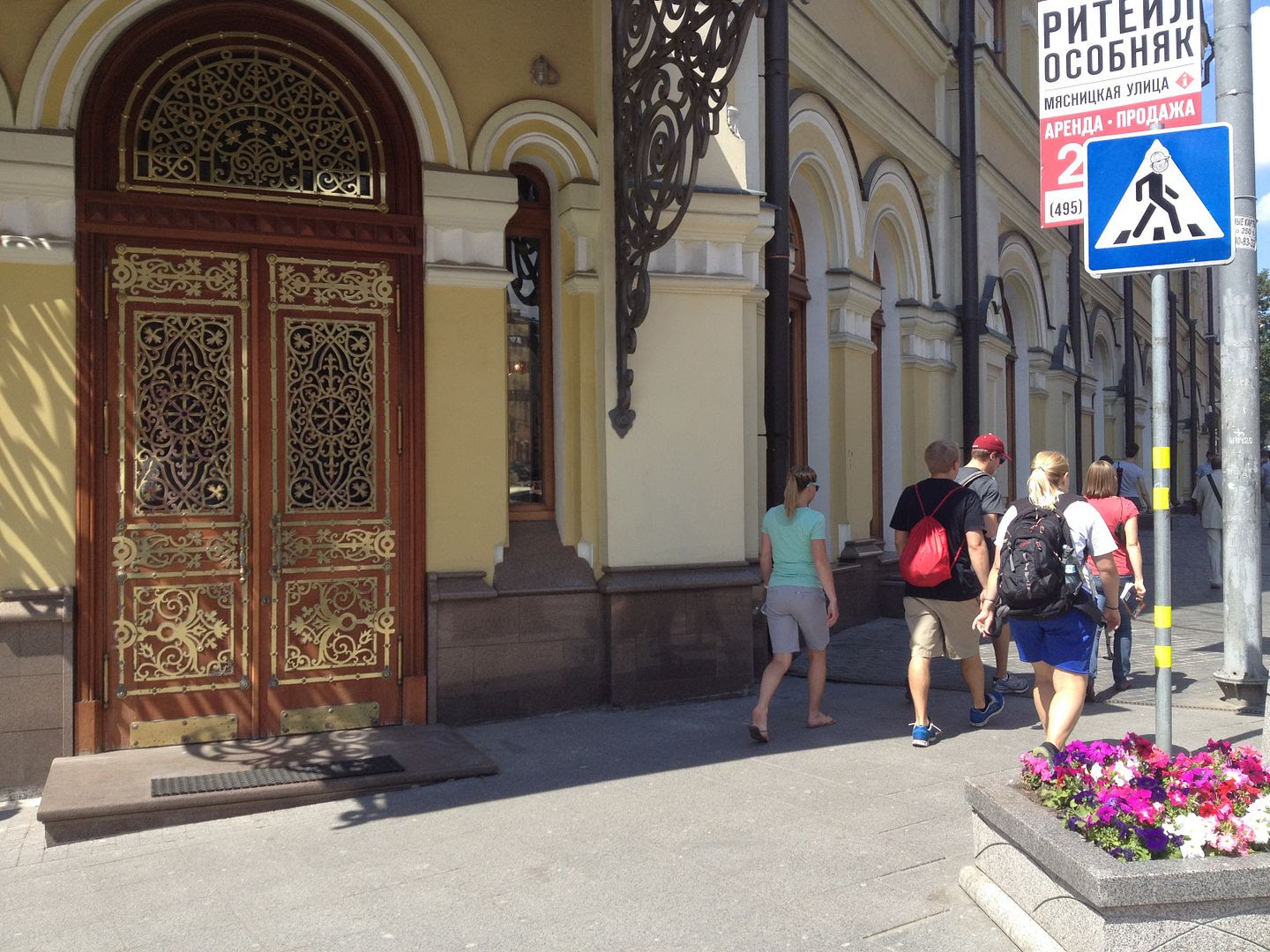 Moscow had some really lovely details. 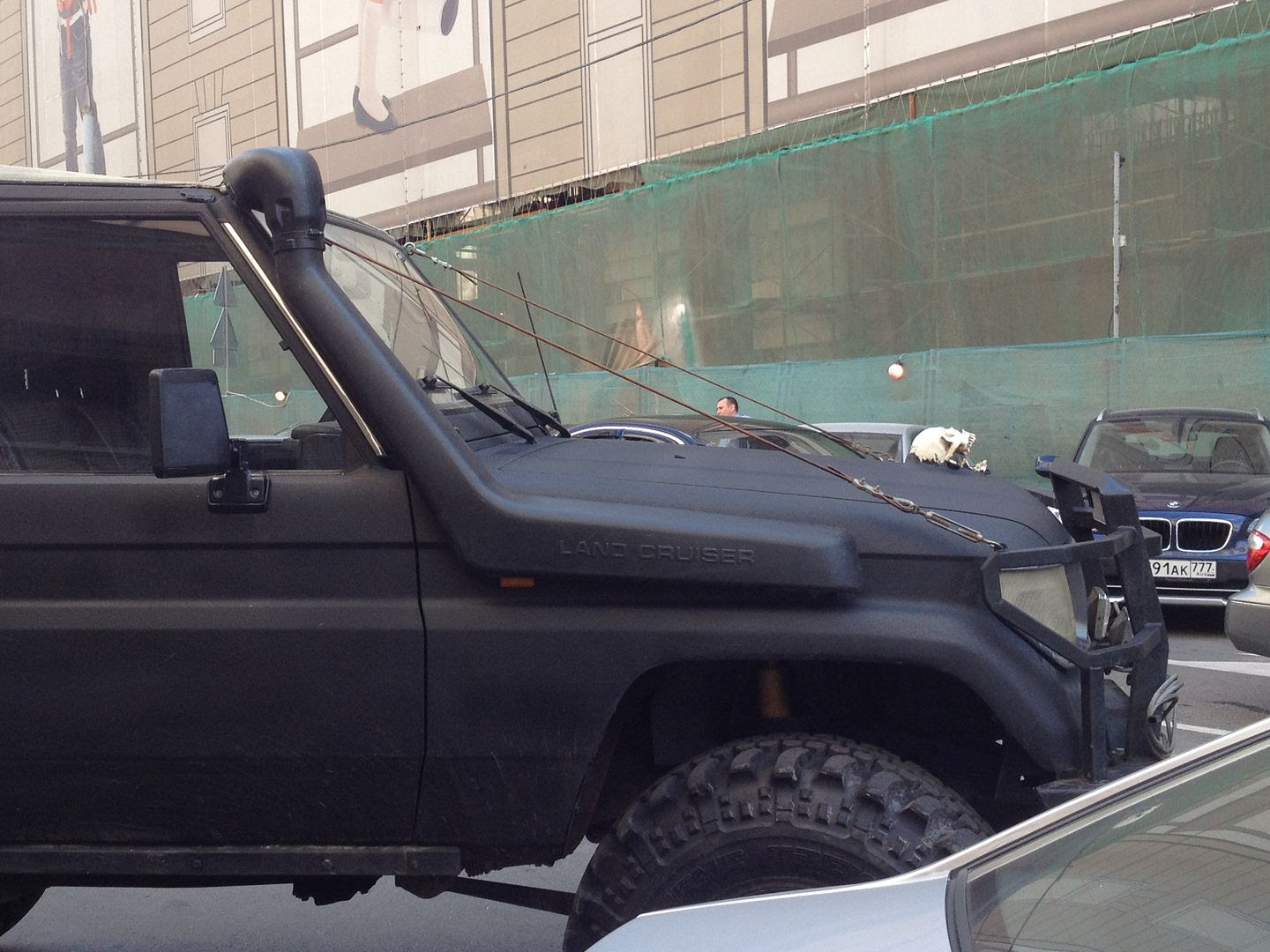 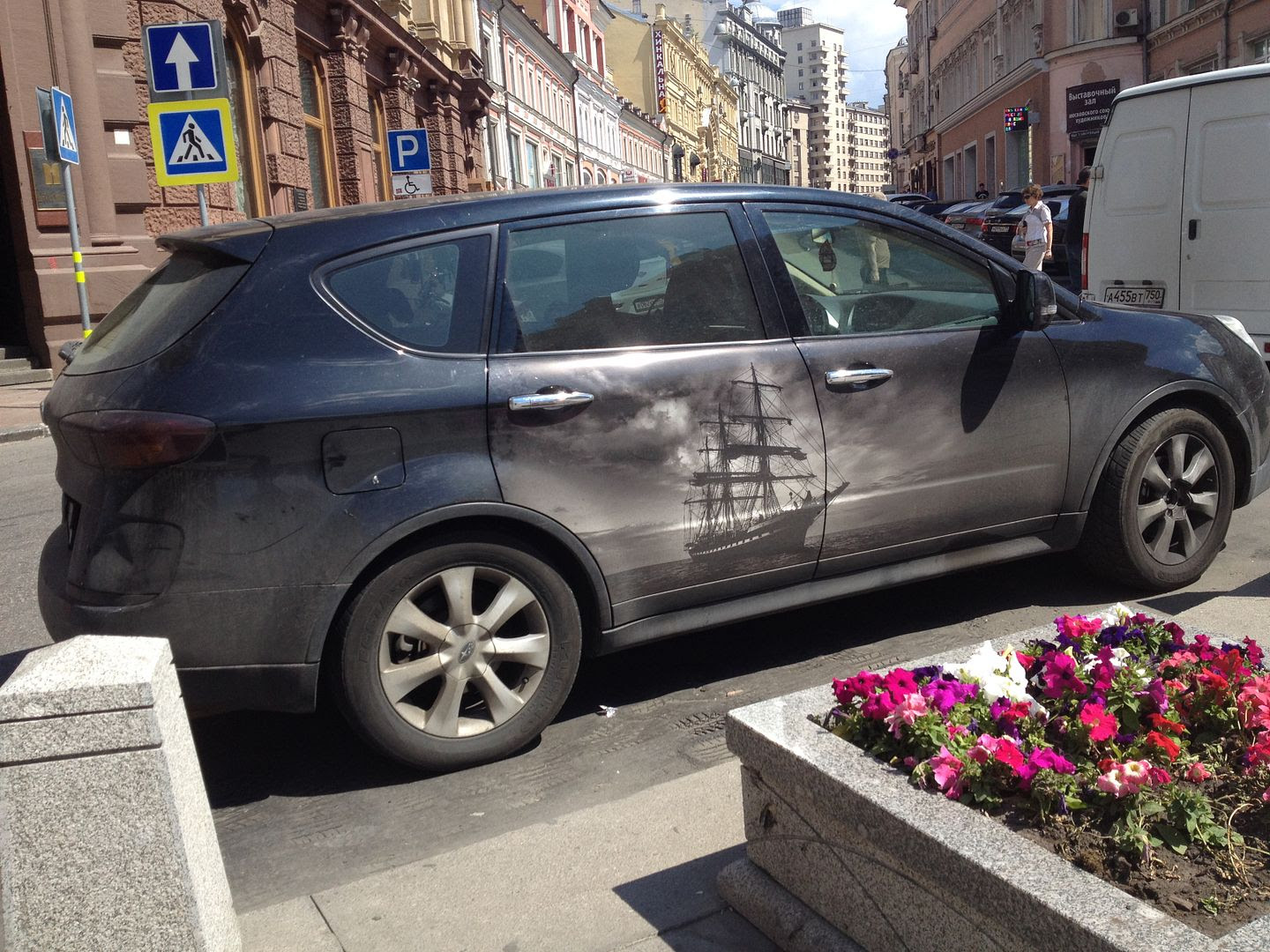 Here's a ship painted on a car. 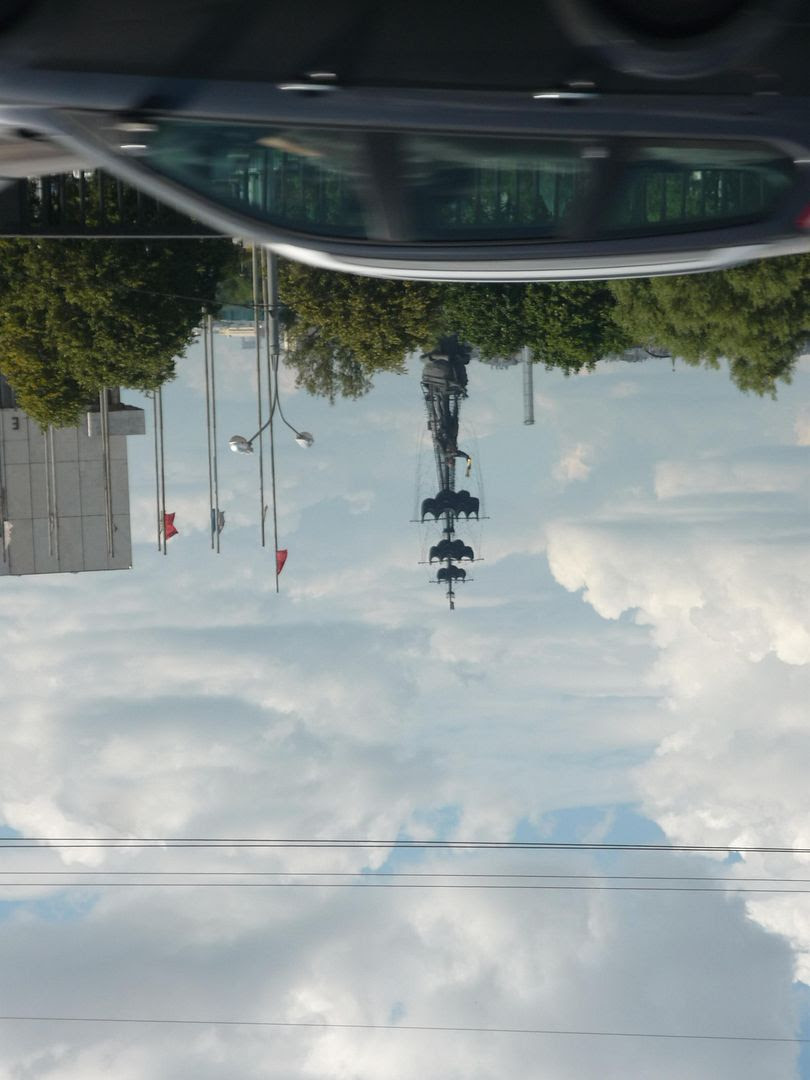 We also spotted a memorial to Peter the Great shaped like a giant pirate ship. 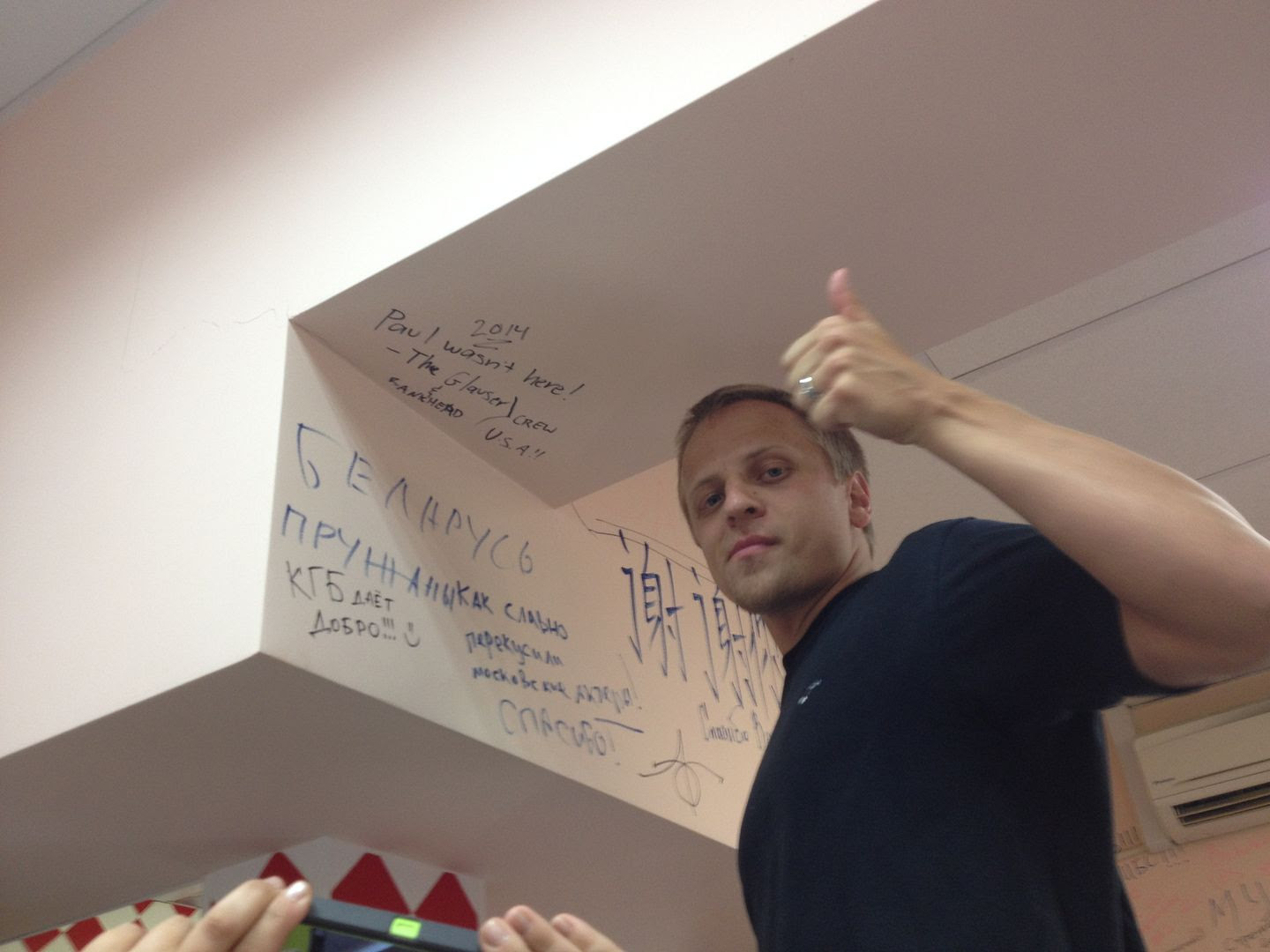 Jeff was intent on finding some shawarma, and of course, loving döners myself, I was not opposed. However, once we found shawarma, Paul took off for some other place while we enjoyed our food and got to write on the ceiling. Jeff wrote: "Paul wasn't here! -The Glauser/Bankhead crew U.S.A!!" 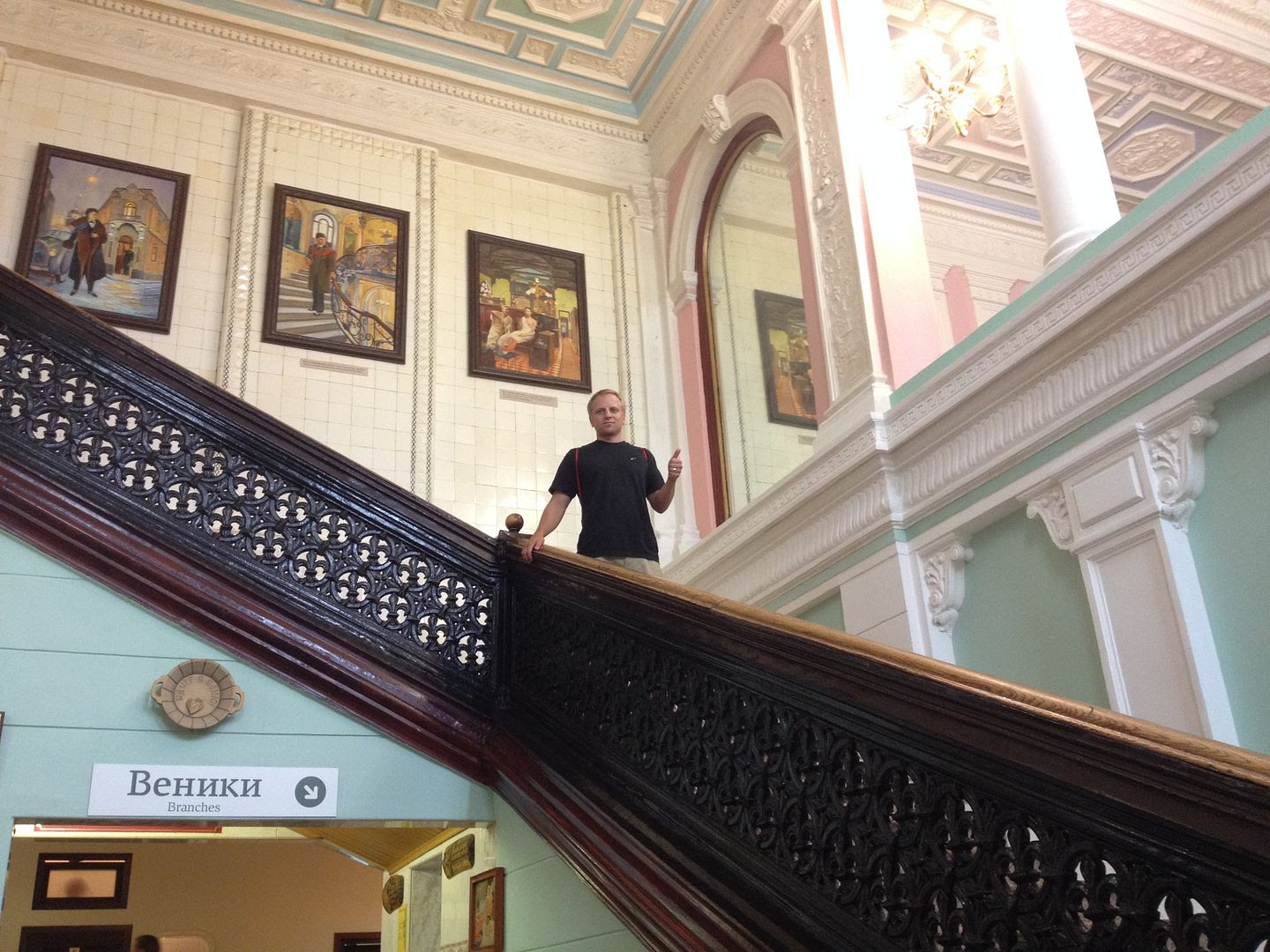 Amy and Paul were super-excited about going to a famous banya (bathhouse). The price and public nudity discouraged Sica and me, but everyone else forked over the cash. 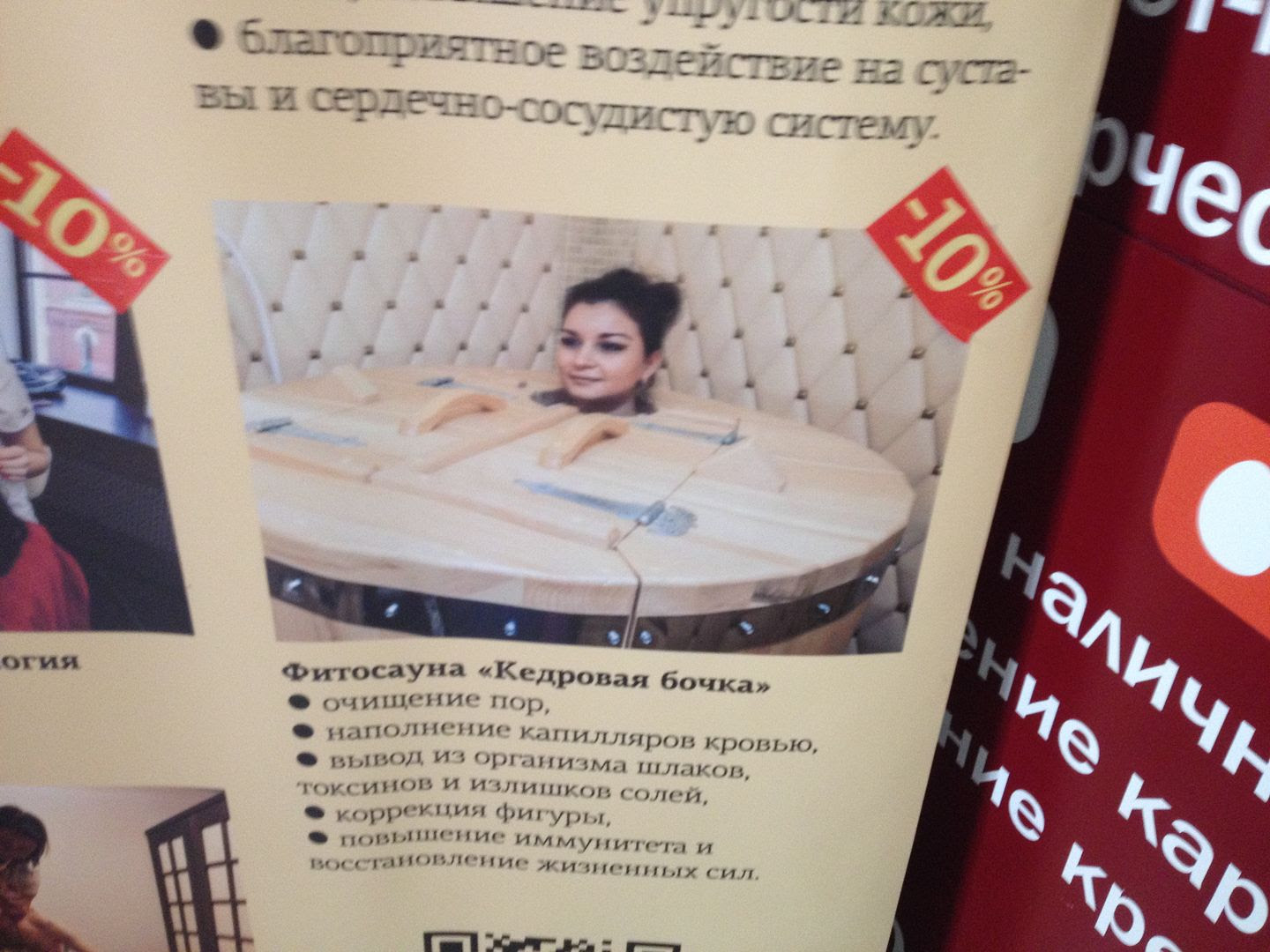 If I could sit like this and enjoy the banya without ever exposing myself to anyone, I might have gone for it. :) Instead, Sica and I went and got a foot and leg massage, which was amazing after so much walking. 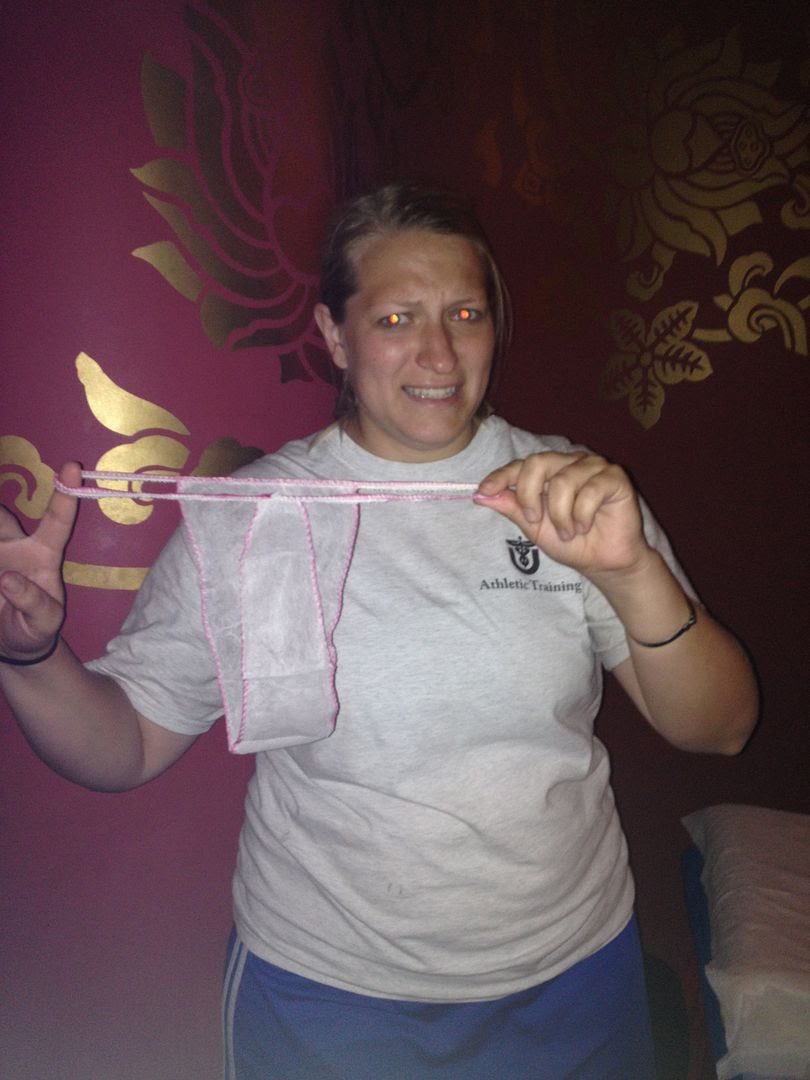 The only awkward thing about the massage place was that they gave us these weirdy paper panties to wear for the massage. (Sorry about the poor quality of the picture; I just couldn't not post it.) I said "no way" to the frilly paper panties and put on my swim shorts instead. It turned out that our masseuses were Chinese, so I talked to them for a bit in Mandarin, which made all three of us happy. I think Sica just enjoyed the massage.