Grandma's Umbrella Reincarnated As a Skirt 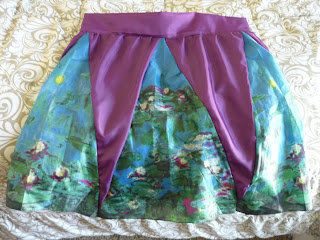 After my grandma died, I discovered a lovely Van Gogh umbrella in her closet and took it as a keepsake. It was so typically classy of her--it had triangles of Monet's water lily paintings. My grandma--she was a lady who helped me study for spelling bees and who went back to college after all of her kids were older and studied German and Latin, interests we shared. She cleaned her house thoroughly once a week and hosted extended family fast Sunday dinners for many, many years. As a girl of 13, she had walked miles and miles to attend a church some missionaries had invited her to, and after being baptized, she took a train west and found a place to live so she could be among other believers. She married a guy who was often ornery, but she vowed not to let cancer take her life until she'd formed a better relationship with him. She didn't go the modern-day "easy" way out (divorce)--she stuck it out and prayed about it and said she'd made a covenant. How I loved that lady. And so taking her umbrella was my way of saying, "I won't forget you."

I brought the umbrella to Germany and thought of her every time it rained. I was proud to carry it around.

One day a kid at church made fun of it, asking if I'd pulled it from the place where all the old ladies's misplaced umbrellas were. Oh well. He didn't know.

The strong winds that occurred now and again during rainstorms and snowstorms turned the spokes inside out many times until several were broken and limp and the umbrella was looking pretty sad. But I didn't want to let it go because of the regular reminder of my lovely grandma.

And then, I remembered how I'd seen a usable craft made out of an umbrella. So, after cutting the triangles of waterproof material off of the broken spokes and leaving them in a drawer for a long time, I got to work. 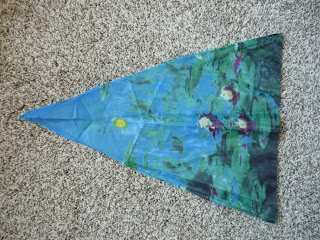 First, I went to the fabric store looking for some blue fabric to go with the umbrella fabric. I found some, but then I decided I wasn't a big fan of the blue. So then I found a shimmery silver that seemed to go with the water lilies. But then I found some material that was the right slippery-ness and that was a purple that perfectly pulled the purple out of Monet. So I bought a yard.

At home, I planned the skirt. Making your own pattern isn't really that hard if you are flexible and can take a little more time. As I always say, "I have more time than money [in this case, for a pattern.]" 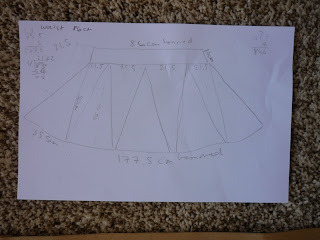 (I ended up wanting the skirt to be less pencil-y, so I added another purple and another umbrella panel than what is shown here, which threw off the moon, no moon, moon, no moon pattern, but oh well.)

Then I used a paper bag to make a pattern for the purple fabric triangles. 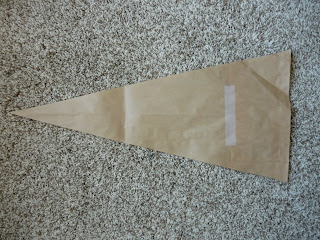 I was glad that the nature of the fabric made for really easy gathering. All I did was use normal thread with the sewing machine set to long, loose stitches, and I was able to gently pull the fabric until it was as wide as I wanted. And I cut out and hemmed an underskirt out of the leftover purple material to avoid translucency. Then I thought hard about where to put everything to sew it all together and made this image for my use (waistband, skirt, underskirt): 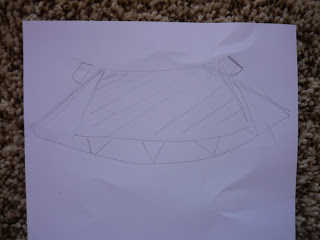 After I sewed along that top line, I sewed up the side of the waistband, cut off hanging threads, and decided against hemming the bottom of the skirt one more time.

I wasn't really counting, but I can tell you that it took me between 2-3 hours. And the results: 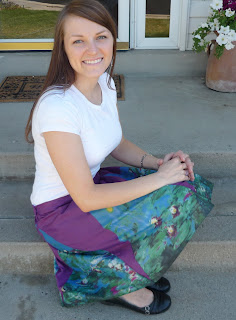 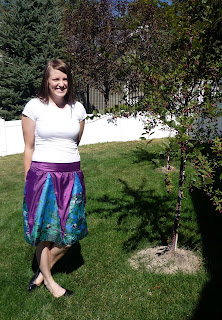