Our San Francisco City Garden Before and After

When Michael and I got a tour of the place in San Francisco where we ended up living and managing, the owner showed us the back of the building, where there was an overgrown, unloved bit of land. I told him I would love to clean it up and make a garden back there. He replied, "Yeah, others have said that." Little did he know that those words were great motivators for me. It took me several months, but I really got into the project and loved it. 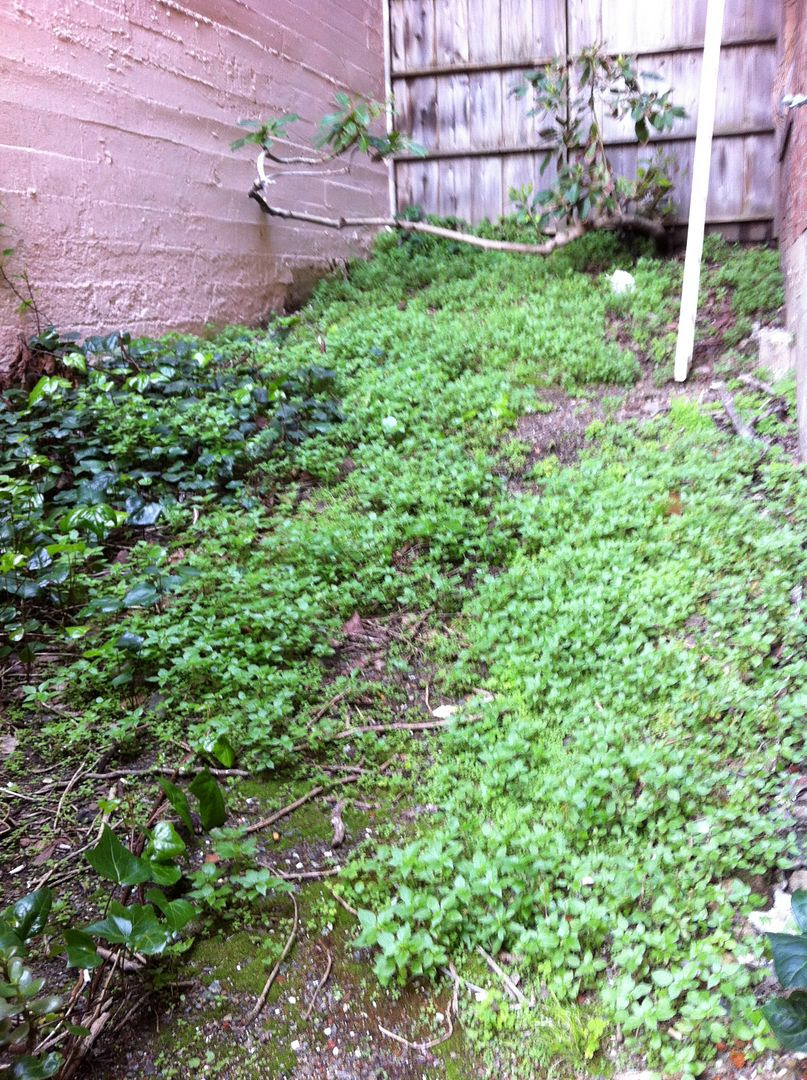 This is what we saw that first day. 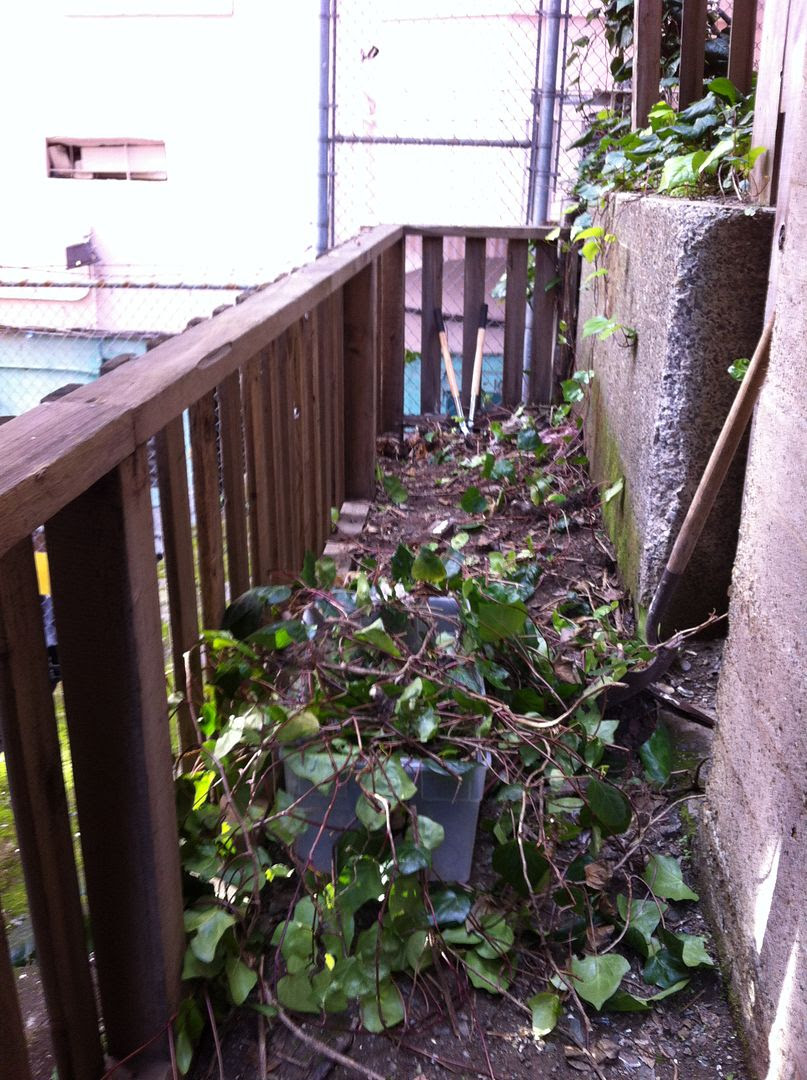 When the landlord decided to accept us as managers, he asked us to please trim back the ivy near the building. Once the ivy was trimmed, though, I couldn't stop.

The ground was littered with pieces of glass and plastic, and the mess was never-ending. Every scrape of the shovel revealed more garbage from 100+ years of people living in our building and in buildings nearby. I probably should have used a mask, because our building lived through a time when the neighborhood was pretty iffy, but I was too mesmerized cleaning up the dirt.

I soon decided that I should first focus on the back part of yard rather than the alleyway walkway. I spent more than 12 hours cleaning the gunk out of that dirt. One resident I'd told about my dream joined me for a couple of hours one afternoon. I filled buckets and boxes with coins, spoons, broken terracotta pieces, plastic of every kind, cigarettes, and most of all, glass. I got so I could spot the shine of light off a piece of glass from the other side of the yard and would dream of searching through dirt. Wouldn't that be awesome if there were some kind of glass magnet? I bought a colander purely for use of cleaning out the dirt, but there were so many rocks in the garden that it was faster without it. I started a pile of rocks on the side, thinking maybe they could be re-used somehow. Several times, I even found fresh-looking produce. There was sooo much garbage.

During the clean-up process, I also pulled out weeds and softened up the rock-hard dirt. Sometimes I get a little too focused on things. One day, I was loosening up dirt and asked Michael to help me out. He chipped away at a rocky area and finally concluded, "This can't be softened, it's rock." Feeling annoyed, I walked over, placed the shovel, and jumped with all my might. The shovel slid into the "rock," and I continued until there wasn't any rock left. My back hurt after that, but wow was it satisfying to get physical work like that done. After all the dirt had been turned and cleaned out, it was quite the task to even out levels so the whole yard wasn't on so much of an incline.

One day I asked Michael if he could pick some stuff up from my work for me. I don't think he was too happy when I showed him three metal chairs that the office was getting rid of. When I told him that I was going to use them in the yard, he seemed doubtful that the area would ever be nice enough for anyone to want to sit back there, but he found a way to get them in the car and put them in the yard for me. I bought some anti-rust spray the same color as the chairs and gave them a good dose of it.

Then one day when the landlord said he was going to be at the building, I asked if I could show him something. I was so nervous, because I wanted to ask him for permission and funding to build a garden. I had even measured, researched the best plants for little sun in San Francisco, mapped out a possible layout, and listed likely costs on a spreadsheet. It turned out that I didn't even have to ask. He saw what I'd done and said, "Great. Let's get some nice plants back here." Our united goal and love for gardening and improving things about the wonderful old building really united us after that. 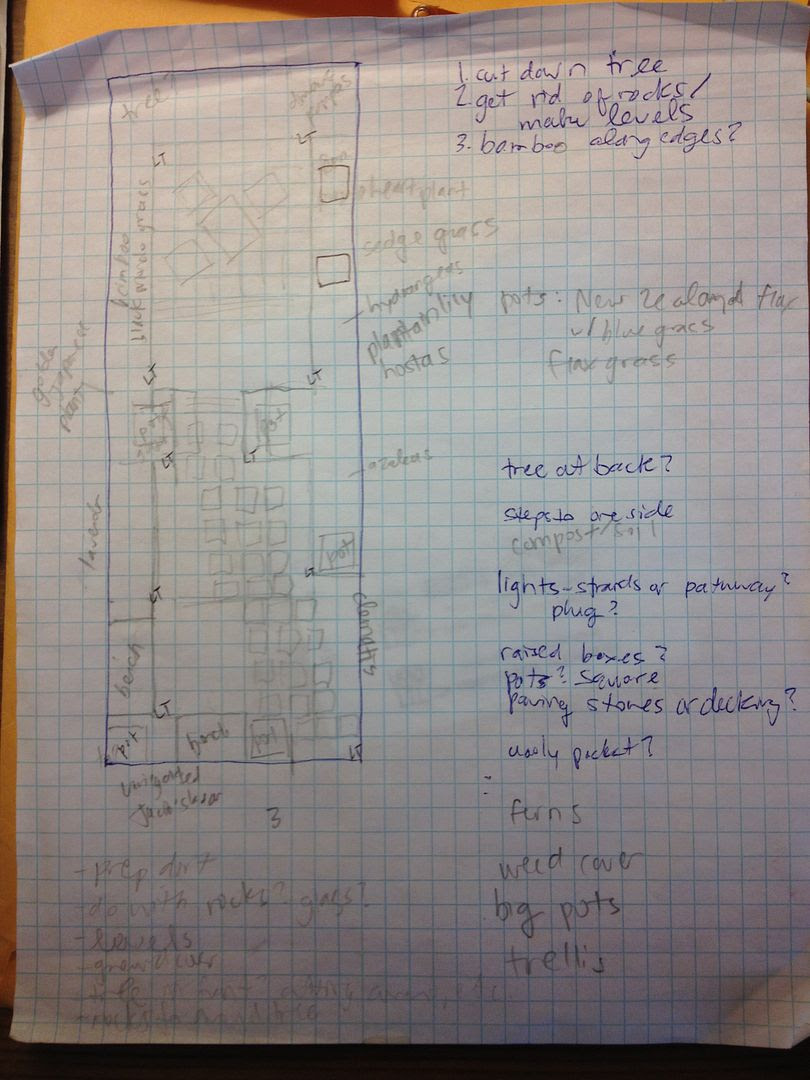 My rough draft of garden plans. The landlord had a handrail put in so people wouldn't struggle so much to get up the steep stairs. 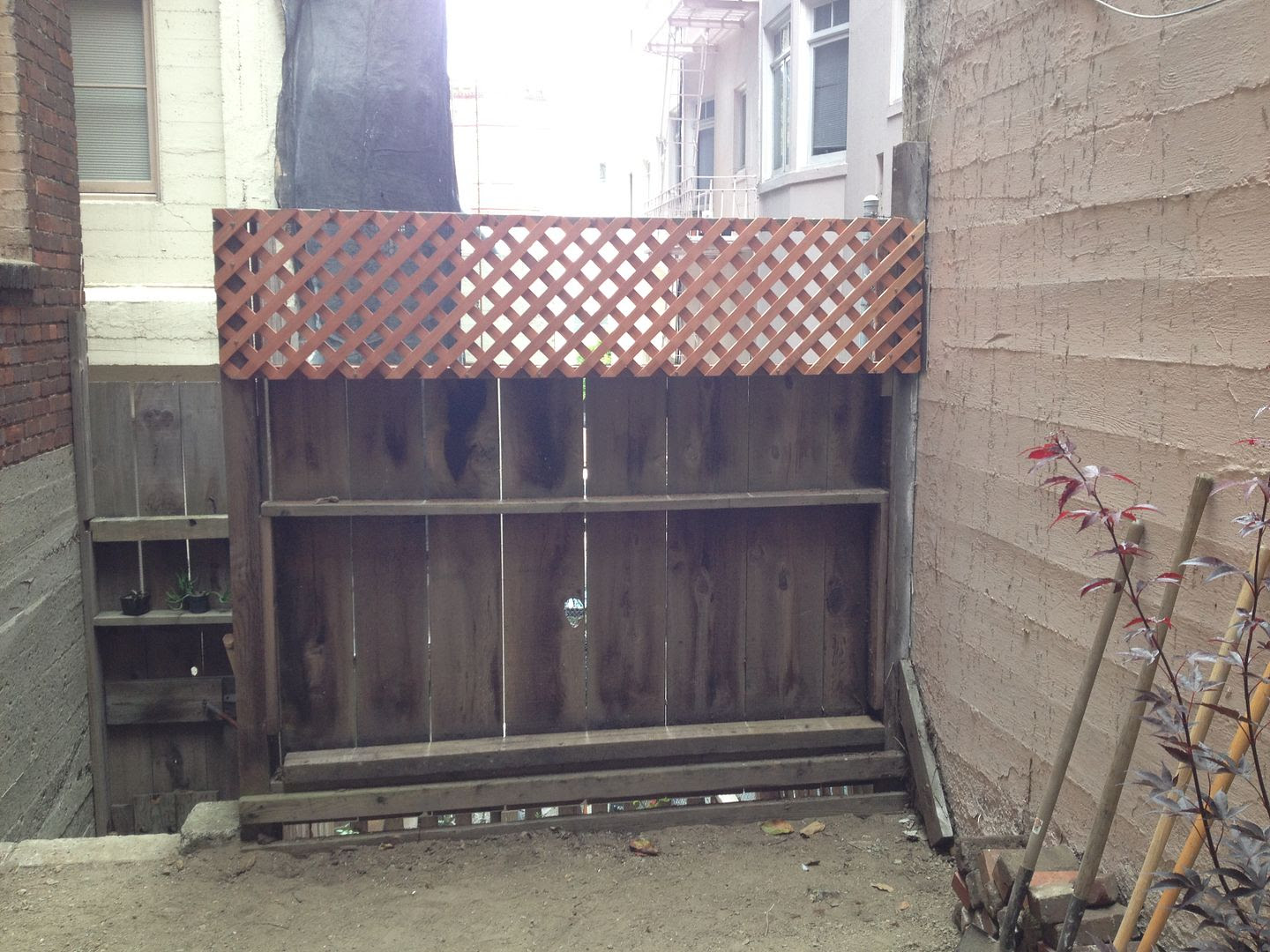 He also had a carpenter cut the tall fence down a little and put in a lattice to let in some more light while still allowing some privacy.

There was a weird-shaped tree branch invading the yard from under the fence. I planned on cutting off the whole thing, but when the landlord saw that Michael had cut off all of its little branches, he defended it. I wasn't sure how we'd work around such a weird branch, but one day I showed up and the landlord had decided I was right and sawed it off himself. 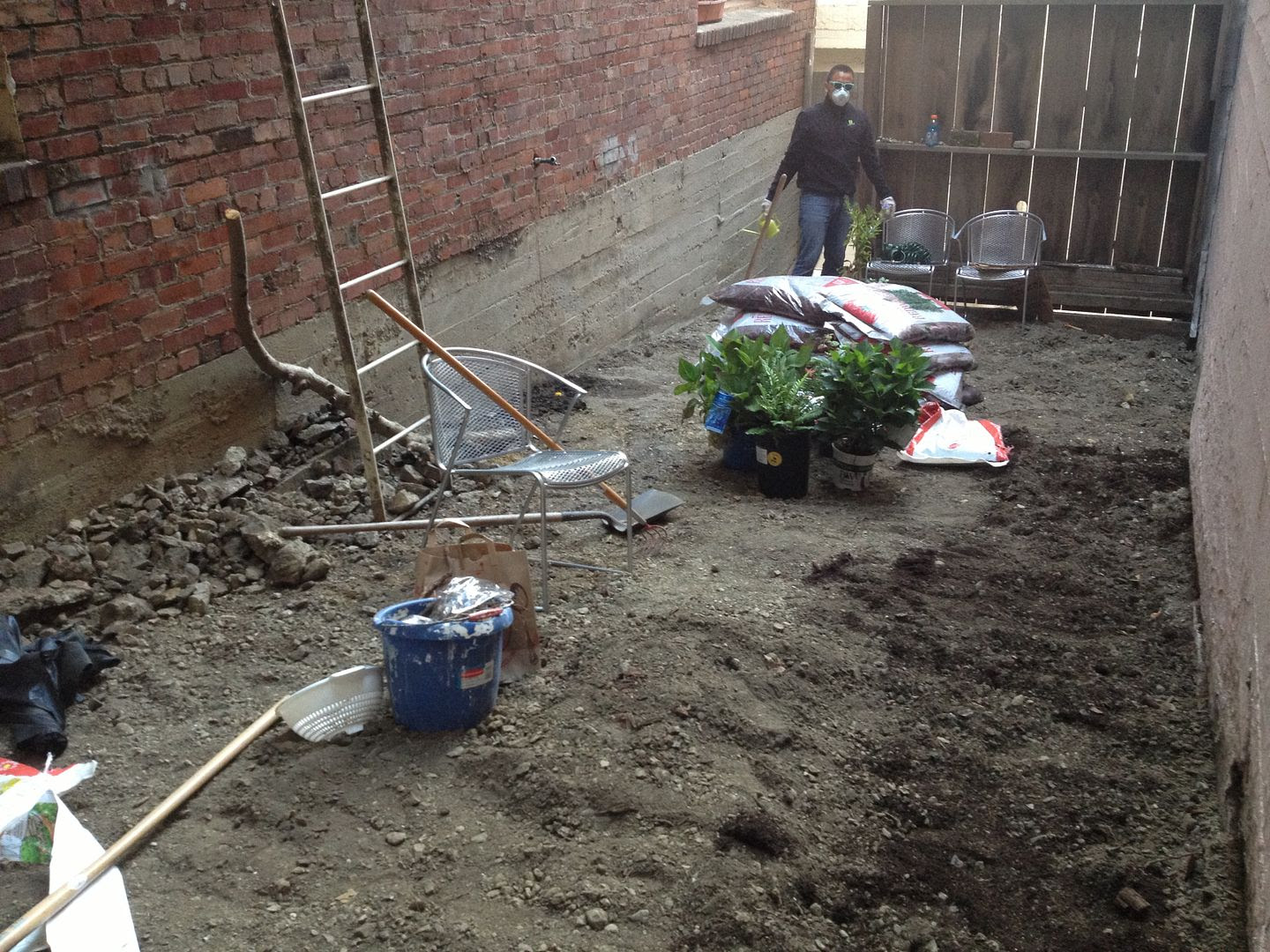 Michael and I met the landlord at his favorite garden supply store, and together we picked up soil prep, wood chips, fertilizer, and plants. We had a few differences of opinion on which plants to get, but I was just happy that we were getting anything. 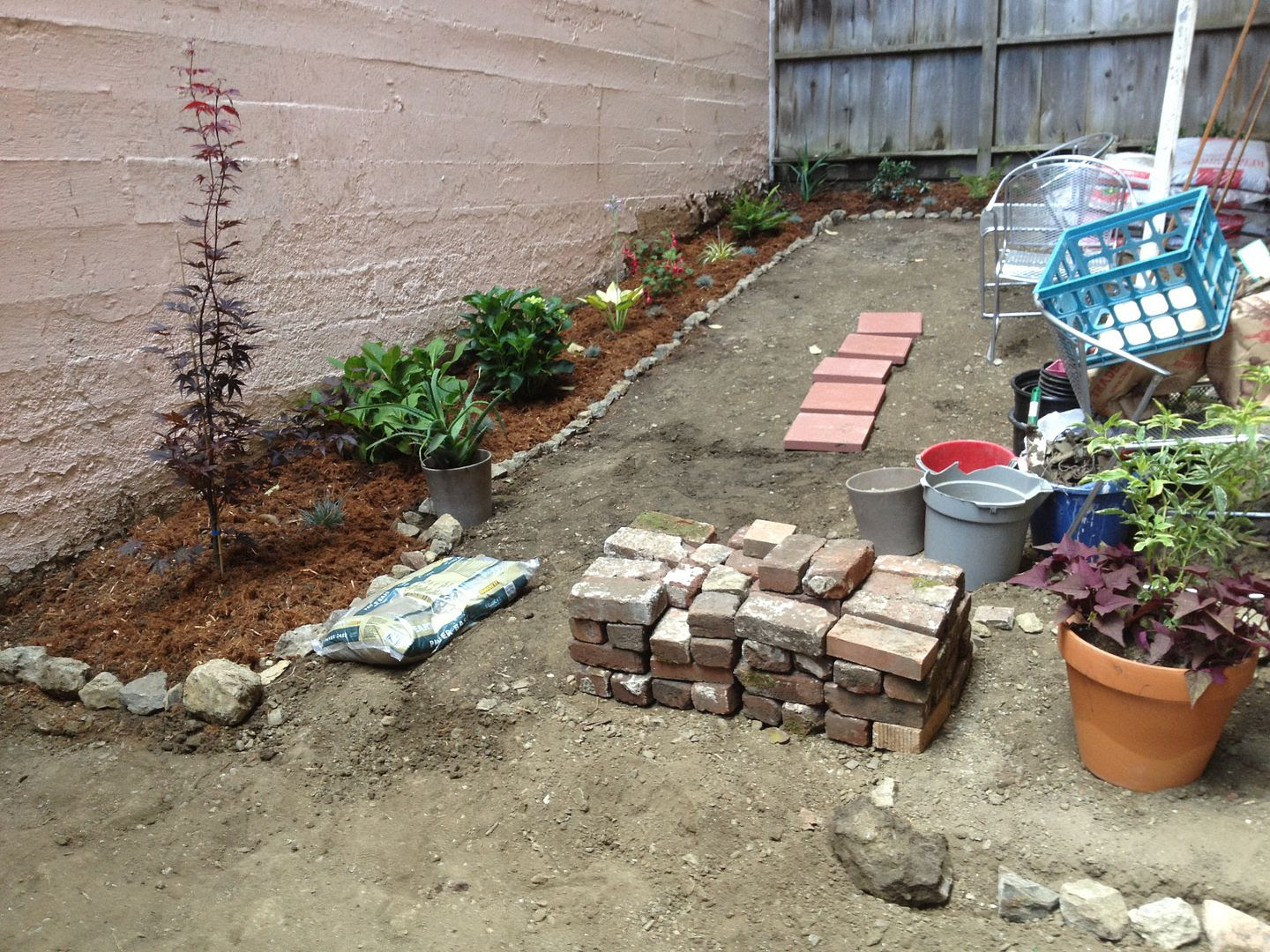 I had found a few bricks in the yard and thought of building some kind of patio or at least borders for the plants  (which, as you can see, I ended up doing with rocks I found in the dirt). When I shared the patio idea with the landlord, he gave us some more bricks from his yard. Then I went online and found people in Oakland giving away bricks, so Michael was again called upon to help me out with transporting stuff he didn't think we needed. We ended up getting 116 bricks and Michael's car was riding very low on the way back to San Francisco. Getting all of the plaster off of those bricks was quite the chore, though we got the hang of it after a while. Interestingly, the plaster turned the sidewalk below white when I tried to wash it off, and the landlord was happily amazed at how clean it looked. He picked us up some paving stones as well. 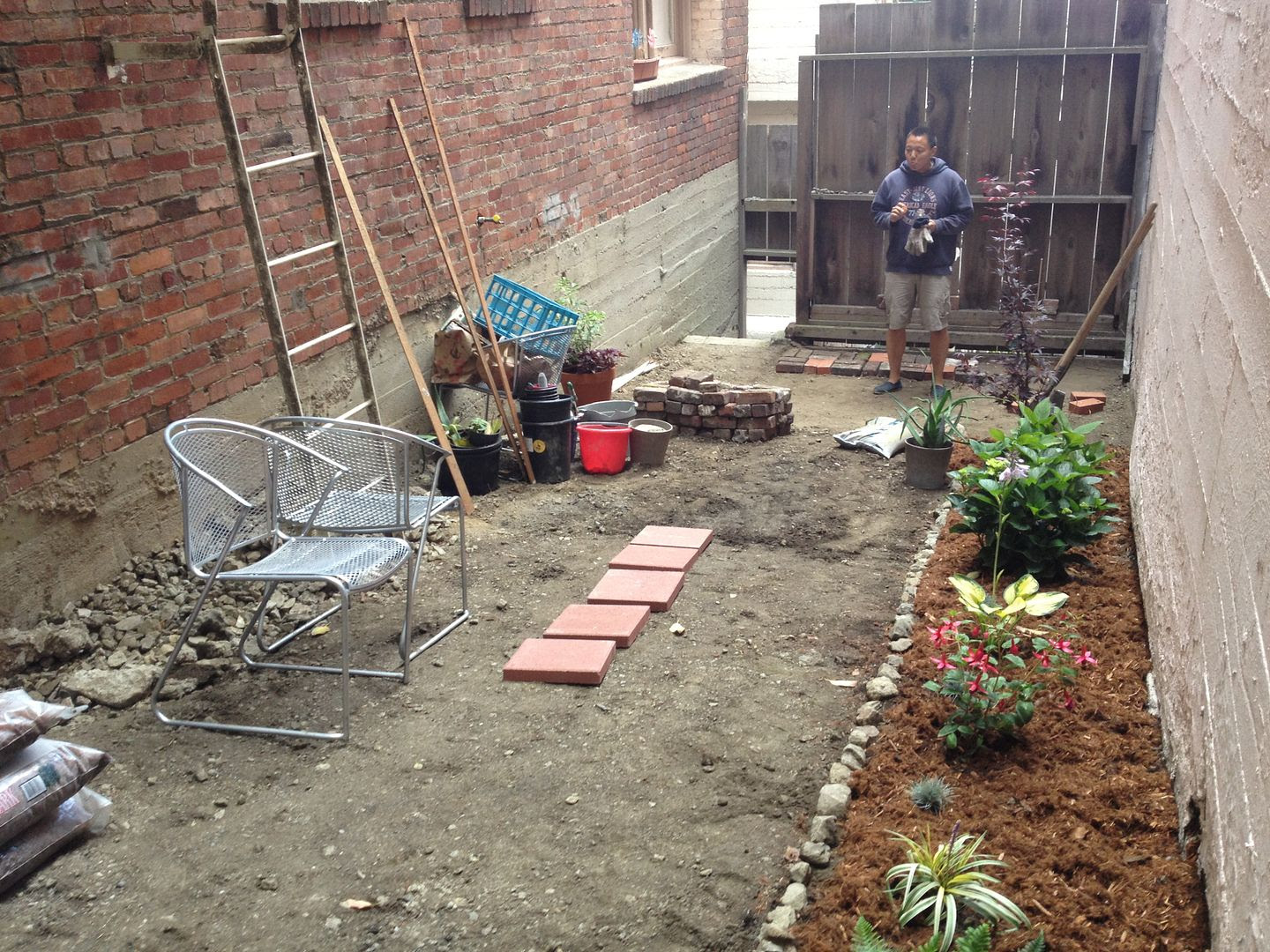 It turned out that Michael was really good at putting the bricks together and he enjoyed doing that (I think), so I'd flatten the ground and separate bricks into piles by size and color and he'd spread the sand and get the bricks positioned just right. 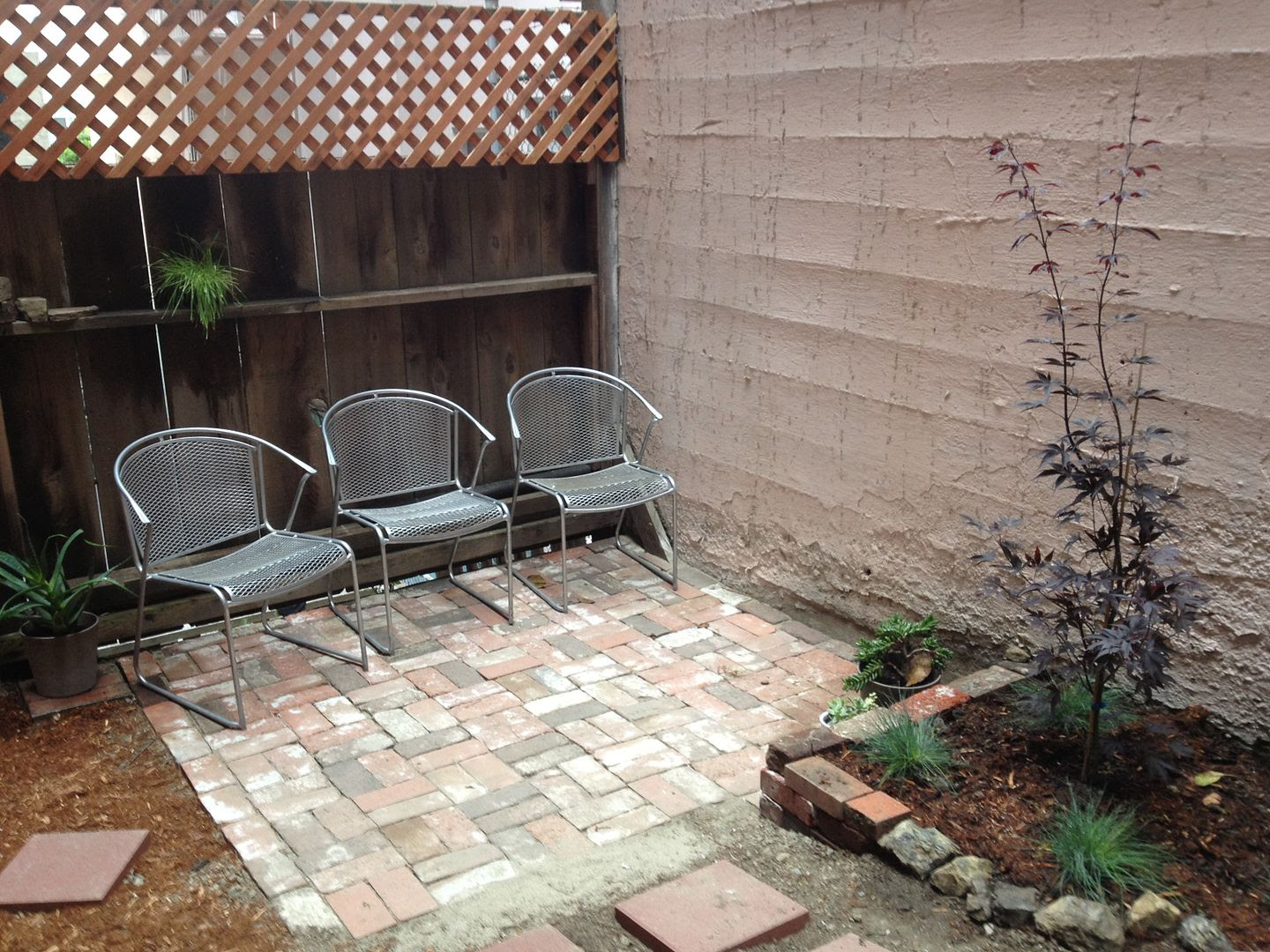 The patio turned out beautifully and we had enough bricks left for me to build a small retaining wall for the plant beds on both sides. 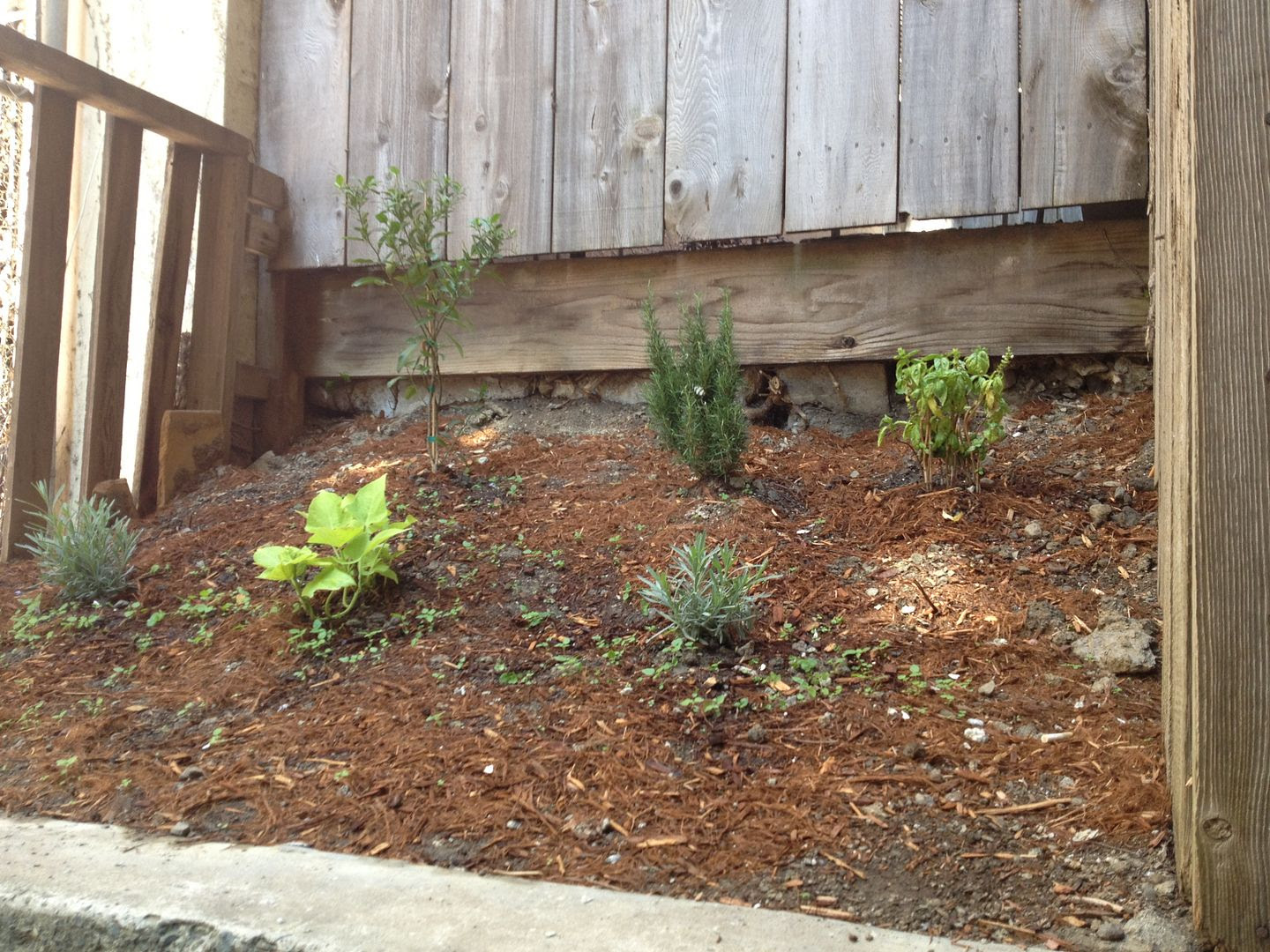 The hill outside of the little yard was one of the toughest feats because the soil was so hard, the ivy roots were really stubborn, and there were a million little weeds that kept coming back. I ended up putting down some of that gardening material and adding a lot more wood chips than shown here in hopes that they would hold back the weeds. Though you see some rosemary and basil here, I'm not sure I would trust the soil for quality, safe herbs just yet. 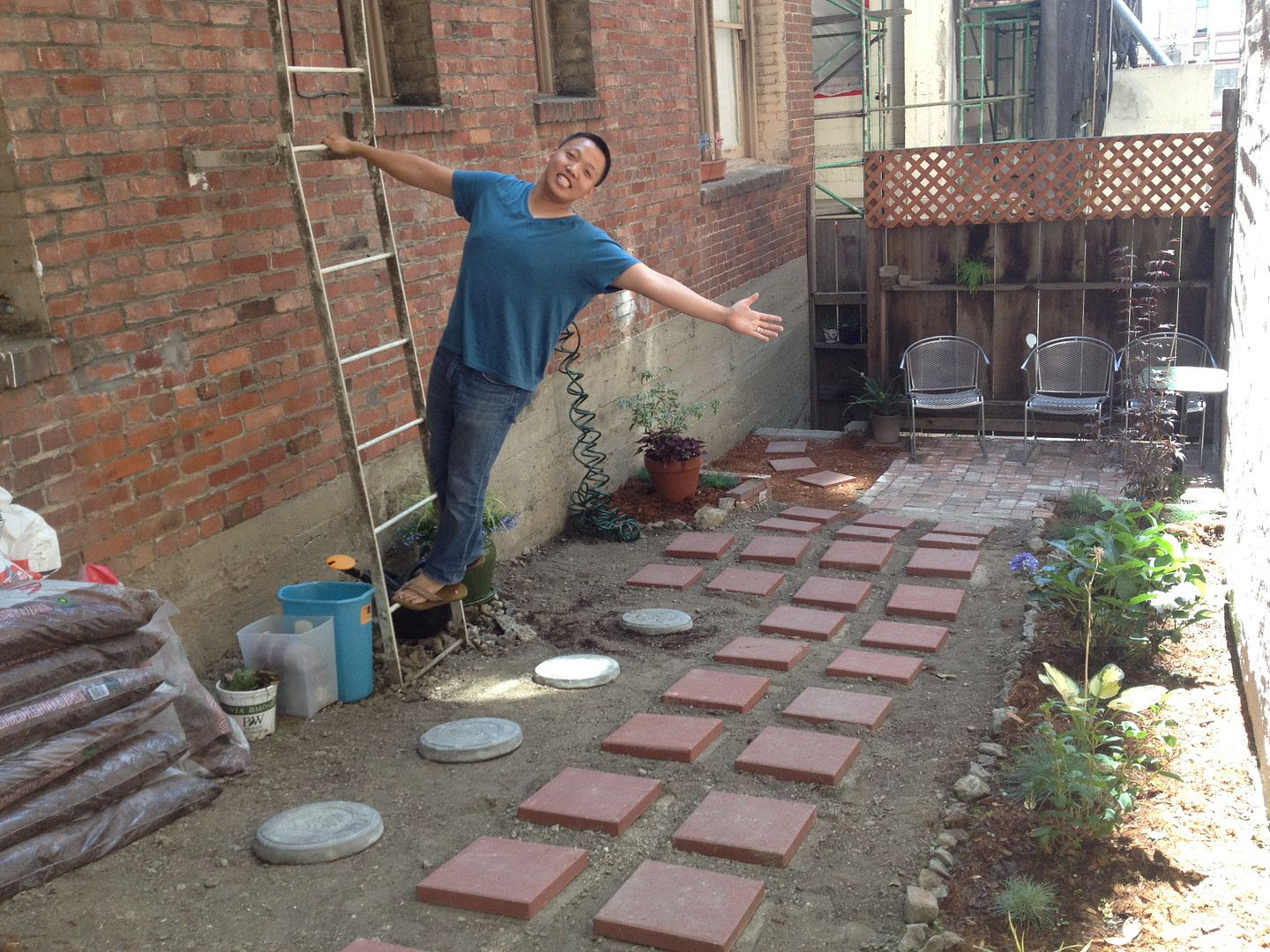 Though Michael joined the project somewhat begrudgingly, I think in the end he loved it (nearly) as much as I did.

I spent hours and hours trying to find some garden lights that we could string back and forth over the garden, but without an outlet nearby, they needed to be solar-powered and yet still able to be turned off in case the neighbors didn't like them, and none of the ones I found on Amazon were long enough or had good reviews about the strength of the lights. Maybe some day. 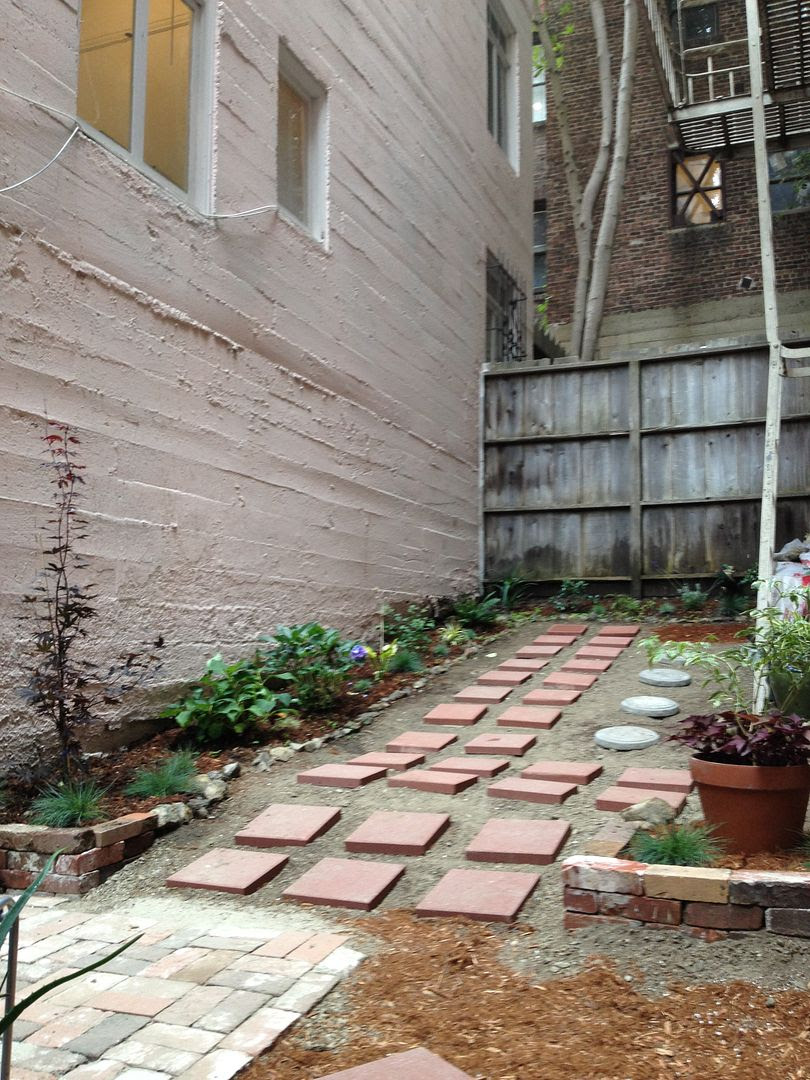 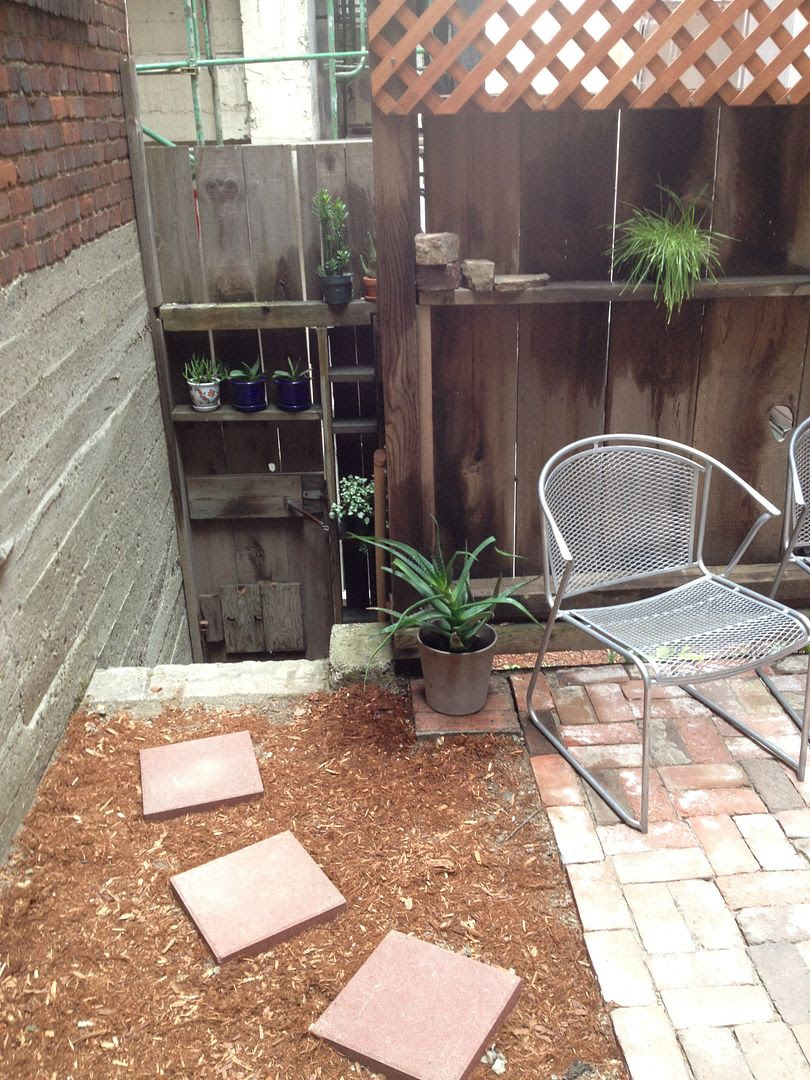 The little cubbies around the door to the yard were perfect places for little plants. We had a get-together to show the residents the new yard and say goodbye, and some of them contributed more plants.

Here are the before and after pictures of the backyard at 821 Leavenworth.

What do you think?