Ever since I read Wild Swans: Three Daughters of China years ago, I've wanted to go to Xi'an, China. For months, I've been pressuring Michael to go there with me, and he promised me the first weekend of May. But as I was about to book it, I realized that Xi'an is quite the expensive trip just to see the terracotta warriors, and as I read about other people's experiences seeing the warriors, I decided that what I actually wanted was to see was some more beautiful nature in China. Yes, there is some good hiking near Xi'an, including the freaky hike at Mt. Hua, but I've heard so much about Guilin that I decided for our last full weekend in China, we should head there instead, an opinion that was confirmed by many friends, Chinese and non-Chinese, on WeChat. 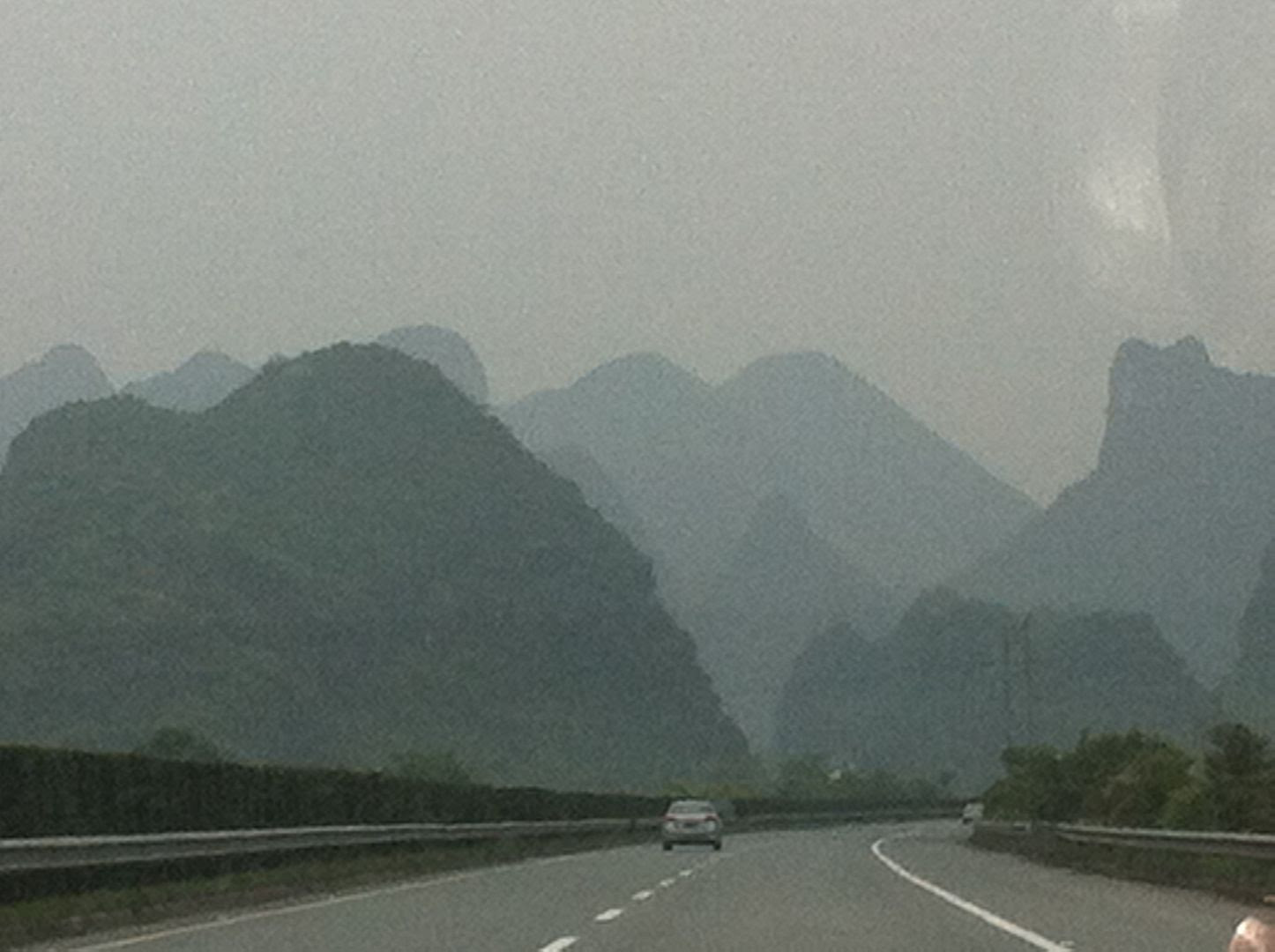 It turns out that the real beauty is in Yangshuo, which is accessed via Guilin. During the drive, I started thinking about how my dad used to quiz me on what makes a V-shaped valley (a river) and what makes a U-shaped valley (a glacier). These karst mountains are so irregular that I had to look up what caused them to form. It turns out that they were underwater millions of years ago, and the salty water (as well as other factors once the water was gone) slowly dissolved the bedrock into the current-day formations. Fascinating.

Michael booked the place we stayed at, Li River Retreat, based on friends' recommendations, and though it was a bit of a trek from the center of Yangshuo, it was a beautiful location, with lovely Chinese design(!), good services, and delicious food. I sure loved the huangmenji (stir-fried chicken and vegetables) that we had, and I'm pretty sure the mango smoothie had nothing but pureed mango in it. Yum. 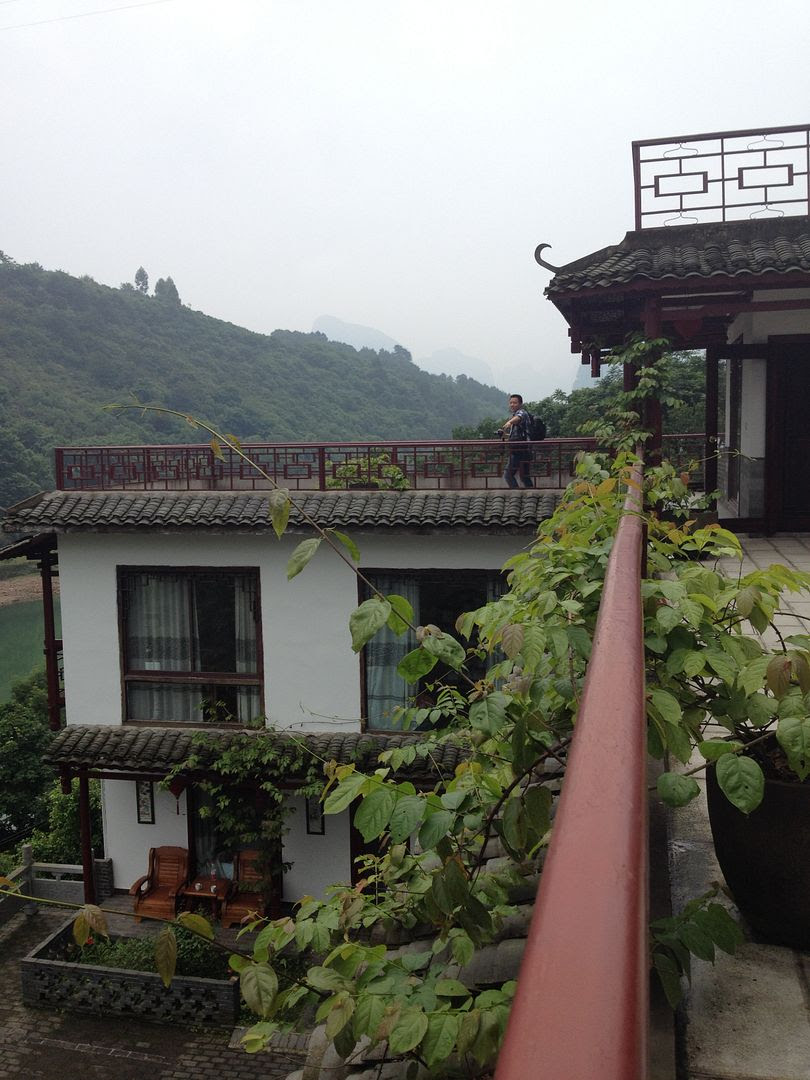 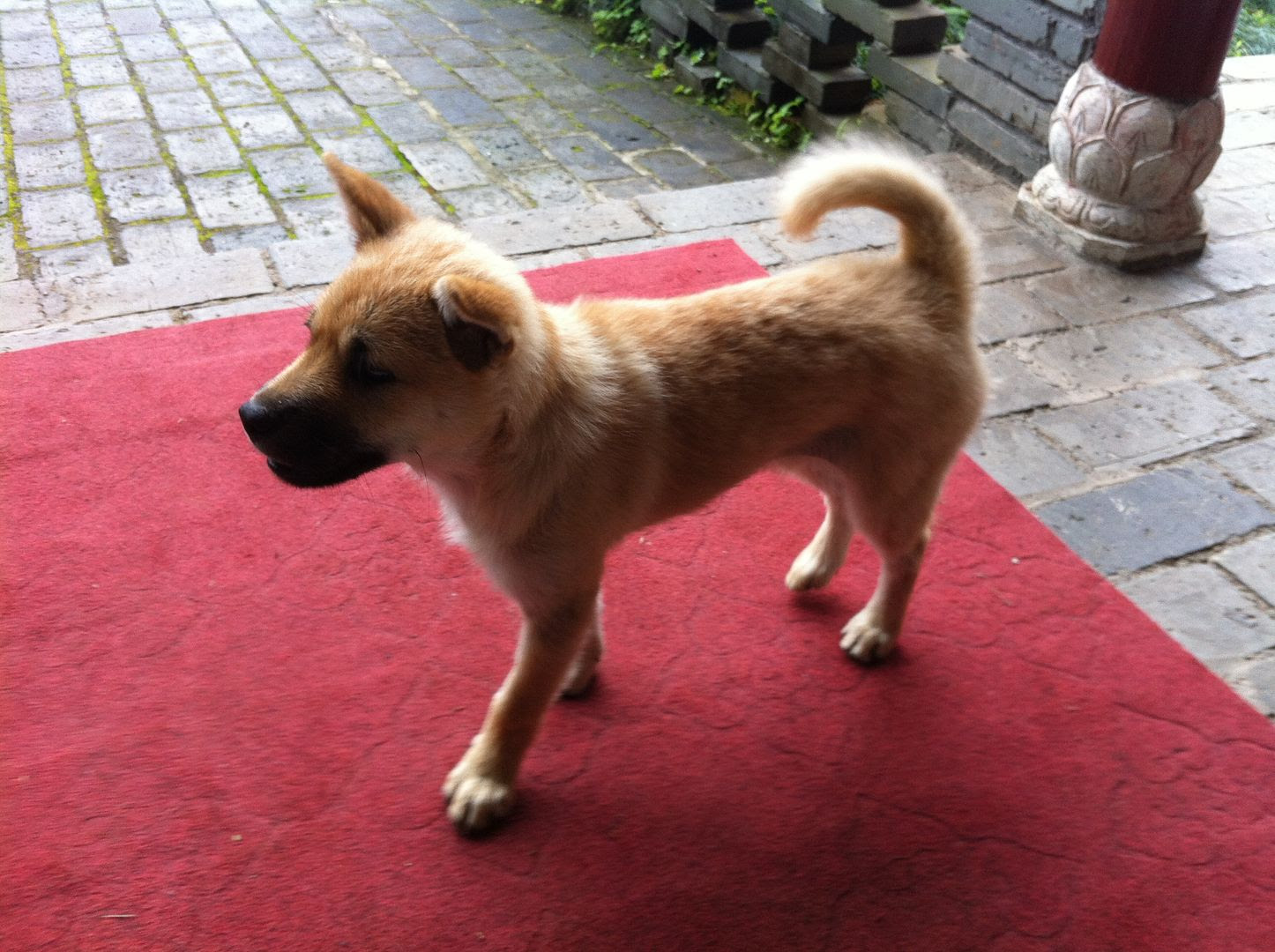 This dog was named Happy. Happy was pretty mellow, but he did get quite happy on my leg once. 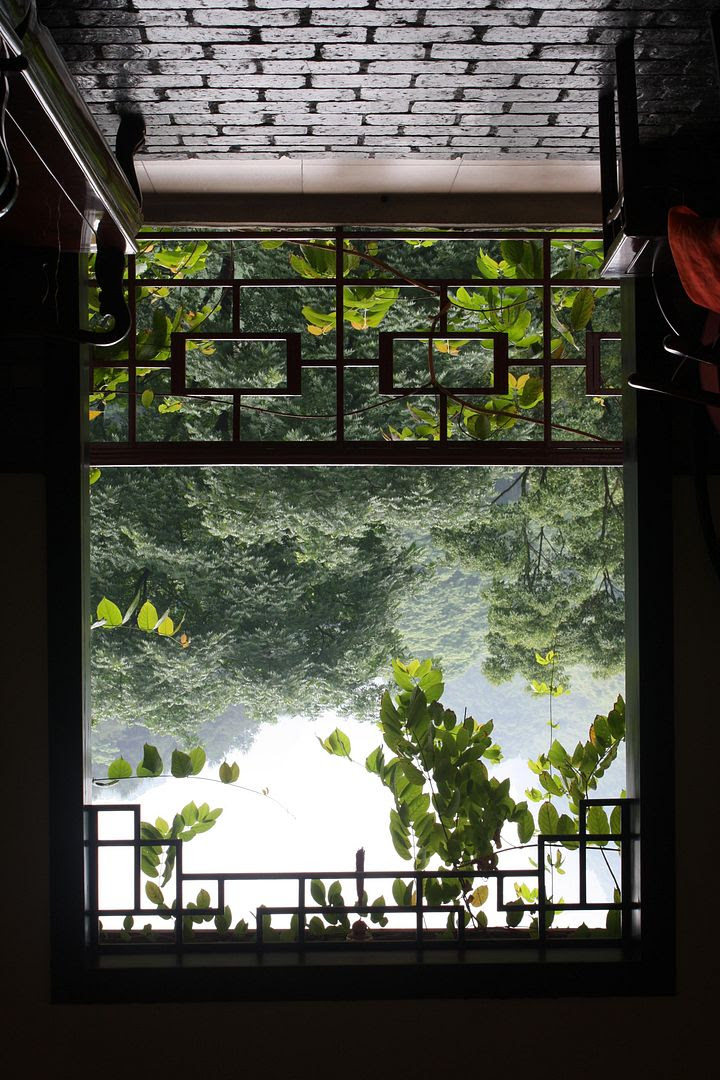 We rented a motorbike and headed out. It turns out that the city of Yangshuo is tiny, but maze-like. We didn't mind, though, because not only was the traffic attention-grabbing, there were stores to survey and bakeries to stop at. 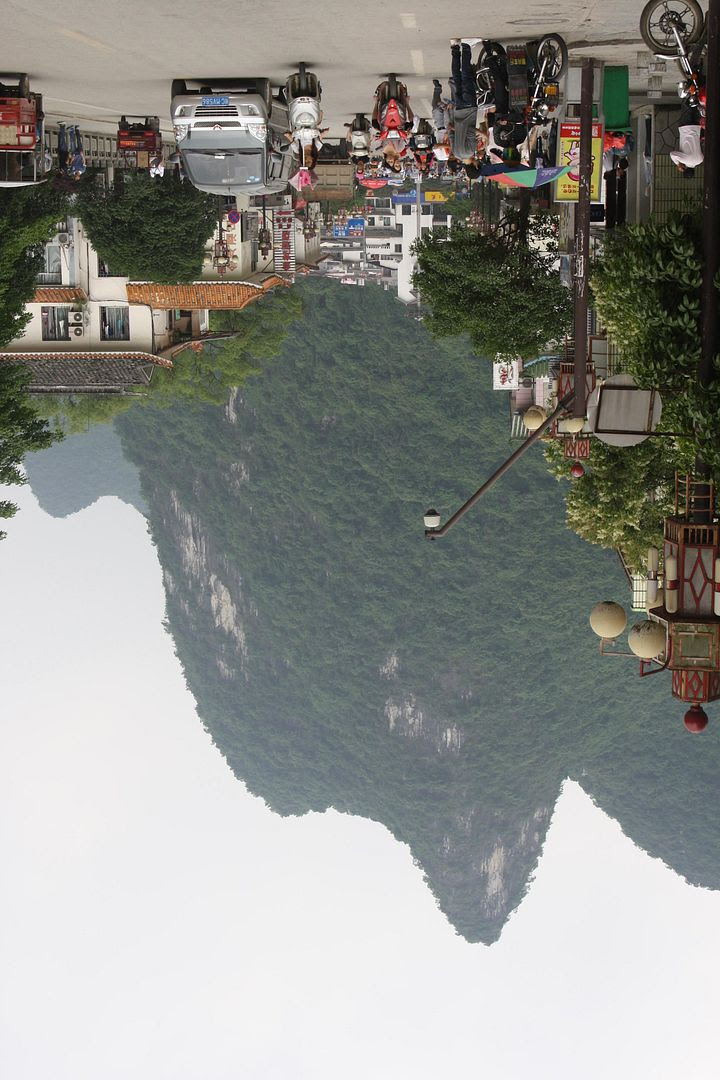 When we finally reached the road on the outskirts of town, we didn't have success finding Moon Hill, a hike to a huge arch. After our bums got numb, I suggested we use Michael's phone's compass and it showed that we were heading north instead of south! So after meeting an Australian/American couple who kindly took a picture of us, we headed back the other direction. 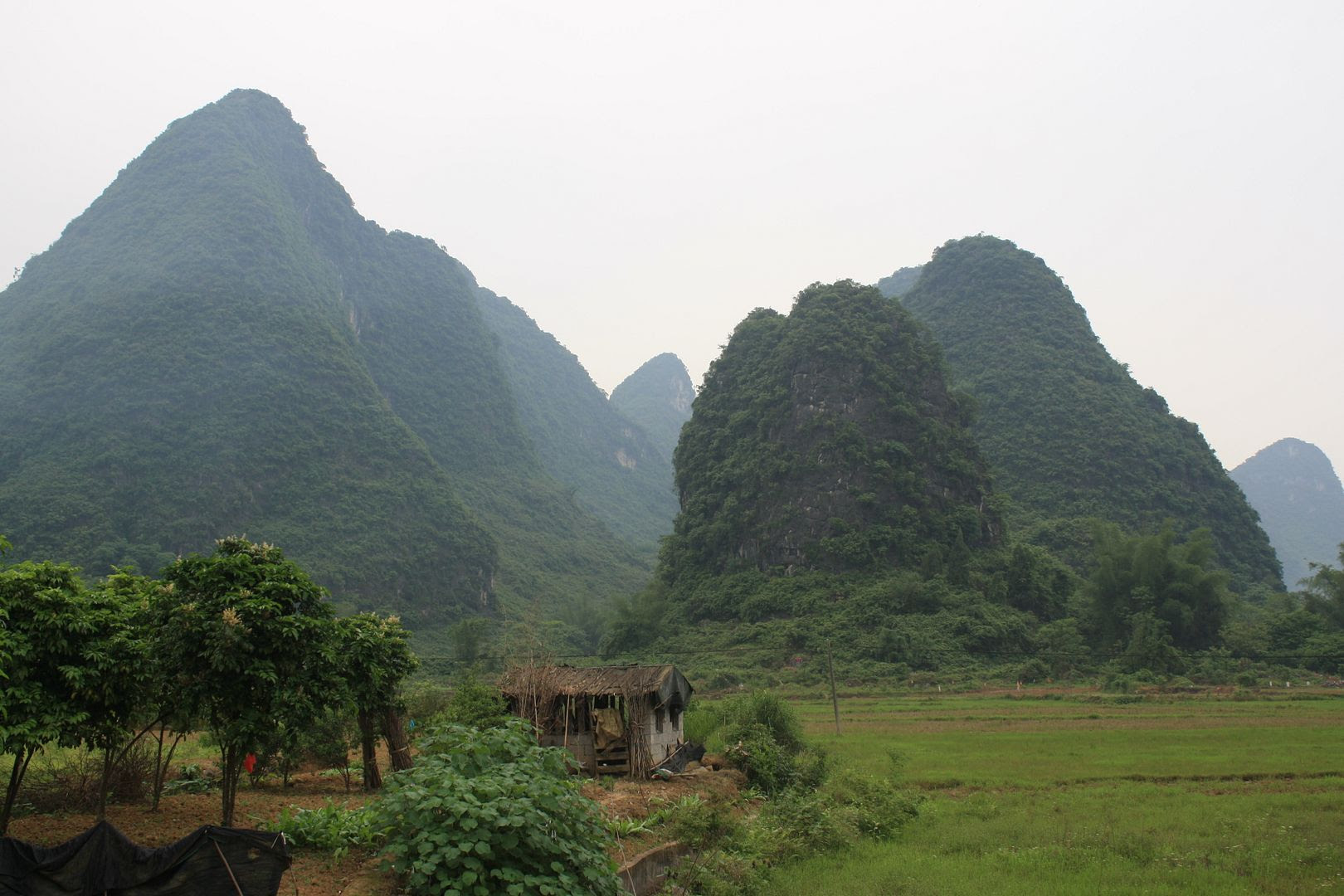 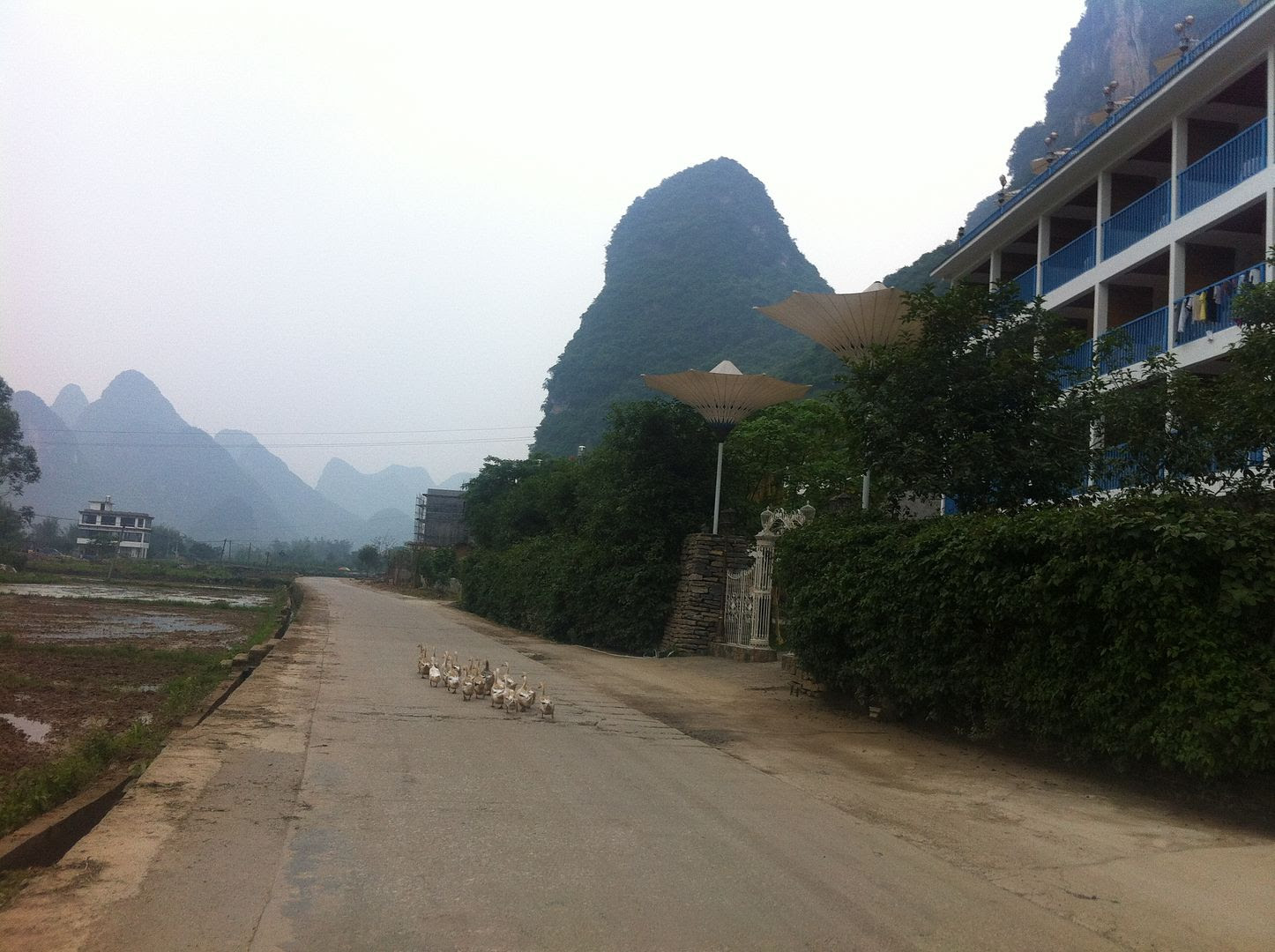 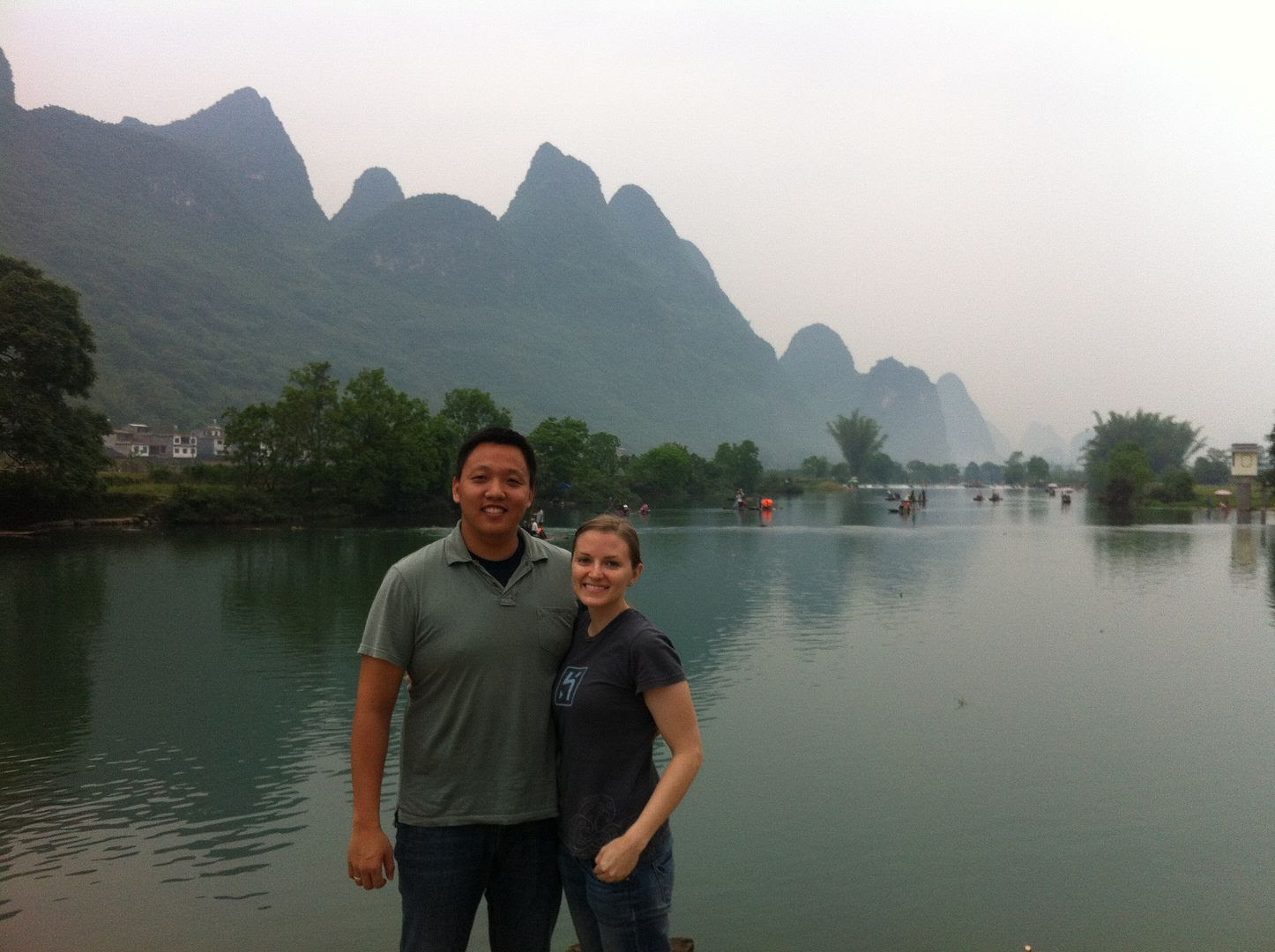 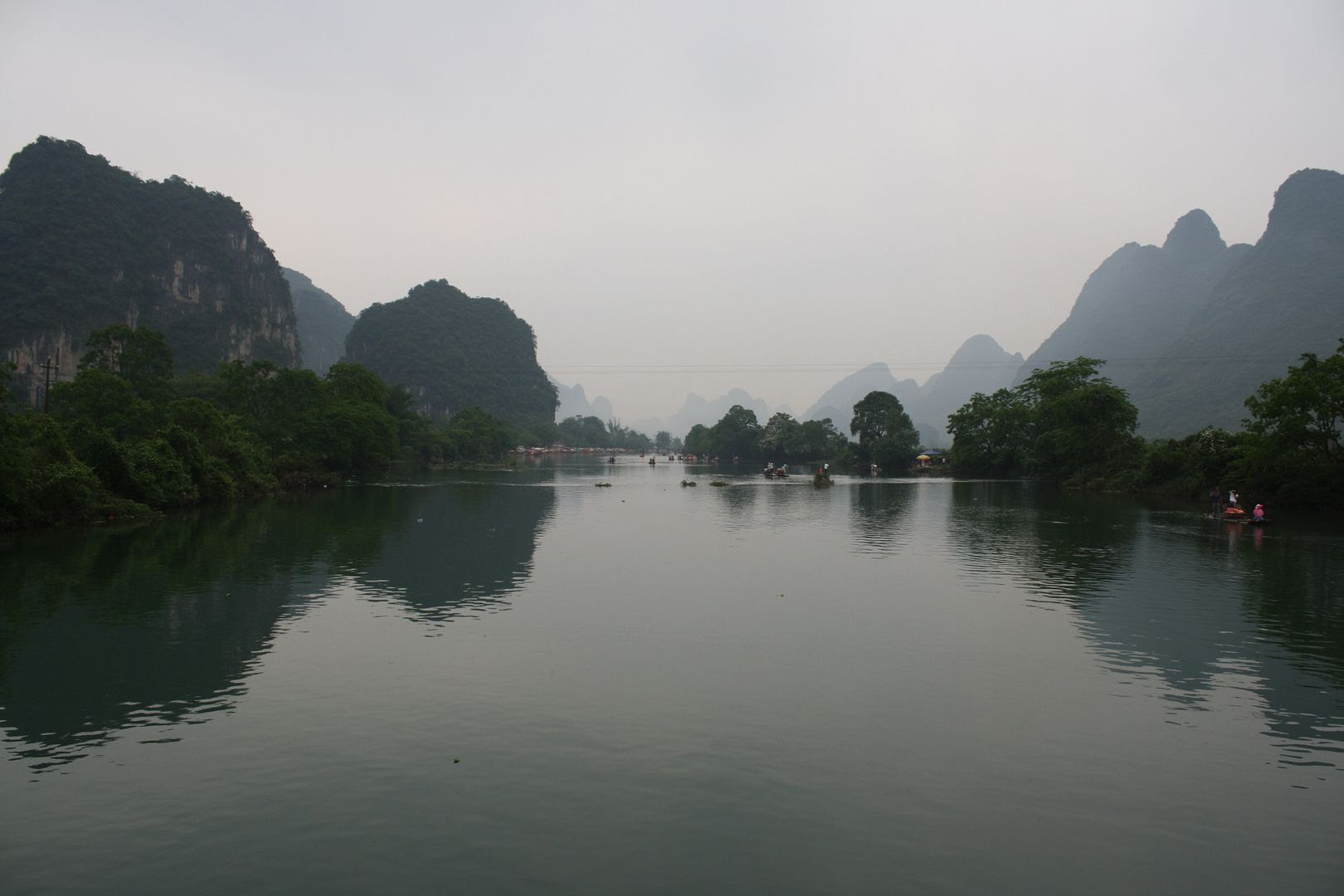 Once we hit a gate in the road, Michael suggested maybe we were supposed to turn at the last fork, so we again checked the map and turned around. Weirdly, though, the compass told us we were heading south when we were going the same direction as before. Thanks to the lack of any useful, non-Chinese signage, we passed the entrance to the Moon Hill hike and ended up giving many villagers the chance to stare at a caucasian on a motorbike with a Chinese guy. 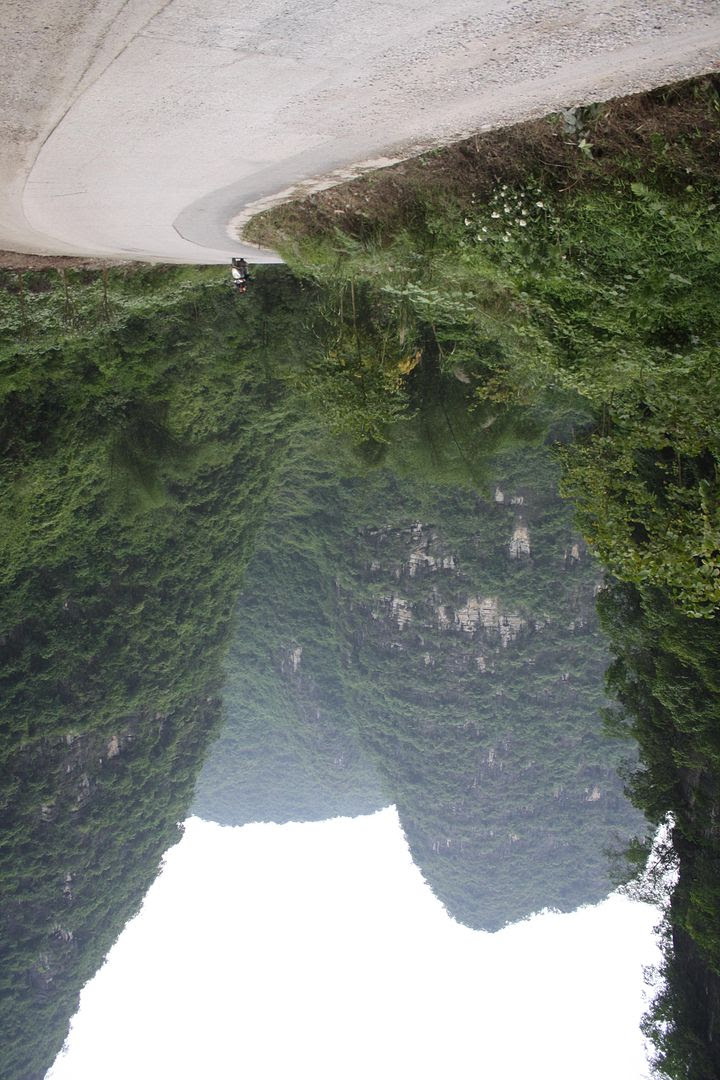 The surroundings were amazing. When we finally found the ticket office to Moon Hill, we were told it was an hour-long hike. It had been overcast for the last several hours, and it was around or after 6 P.M., so it was hard to tell when it would be getting really dark, but we decided to go for it. The path was steep, but we managed to time our hike up at 20 minutes. What I thought was foliage hanging from the arch was actually stalactites. 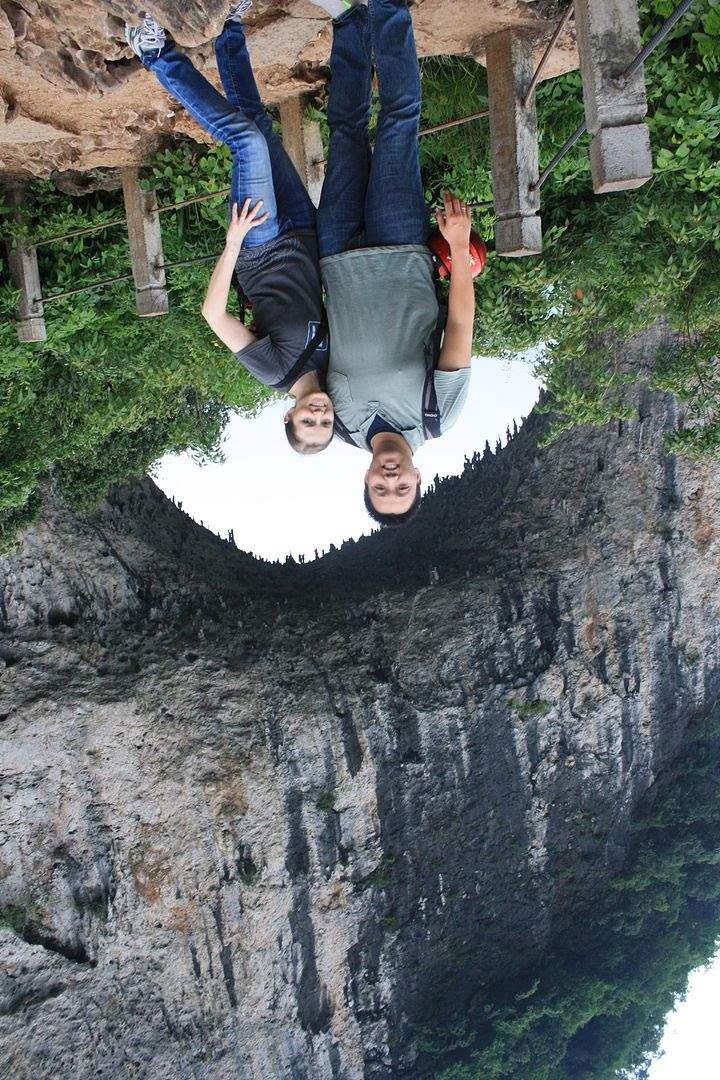 A group of rowdy, show-offy teenagers was at the top at the same time, so we asked them to take a picture. I was so mad that two of them took pictures of us with their phones even after I put my hand up to block them and hid behind Michael. I wish Michael had said something to them or that I had at least thought to say, "Bu yao!" I do not like being a tourist attraction and I really dislike knowing that some kids have a picture of me on their phones. 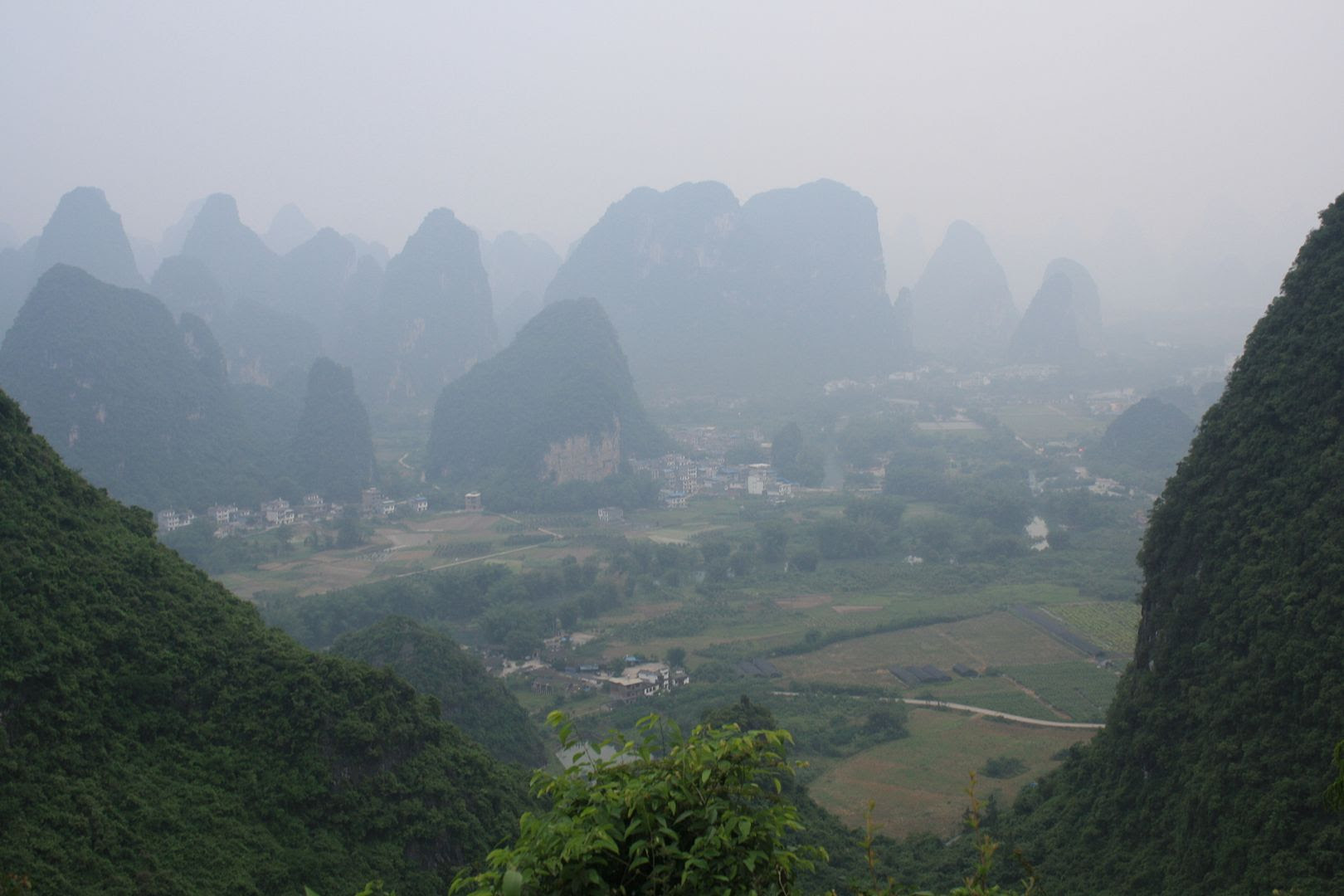 This is the view of the valley behind Moon Hill. 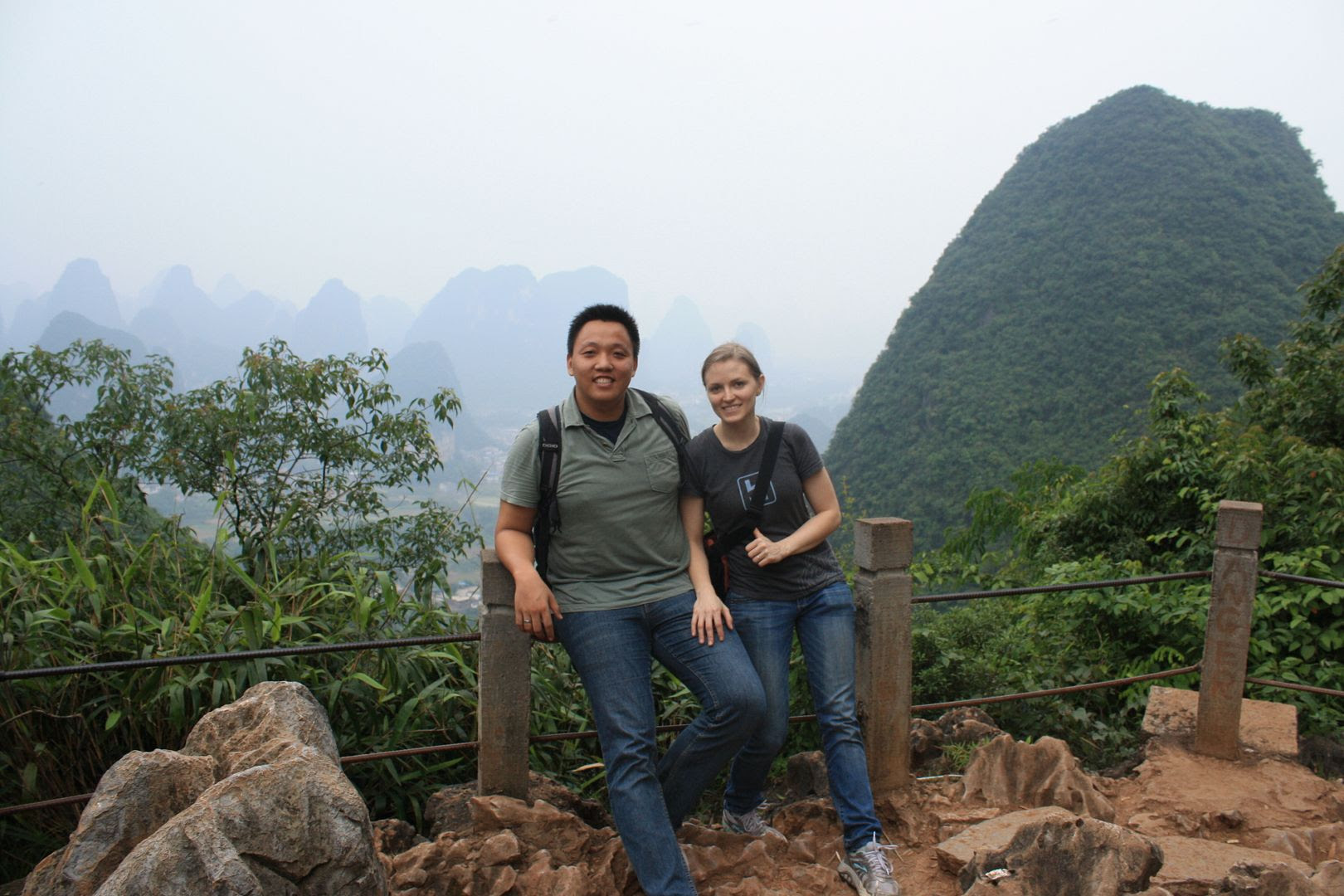 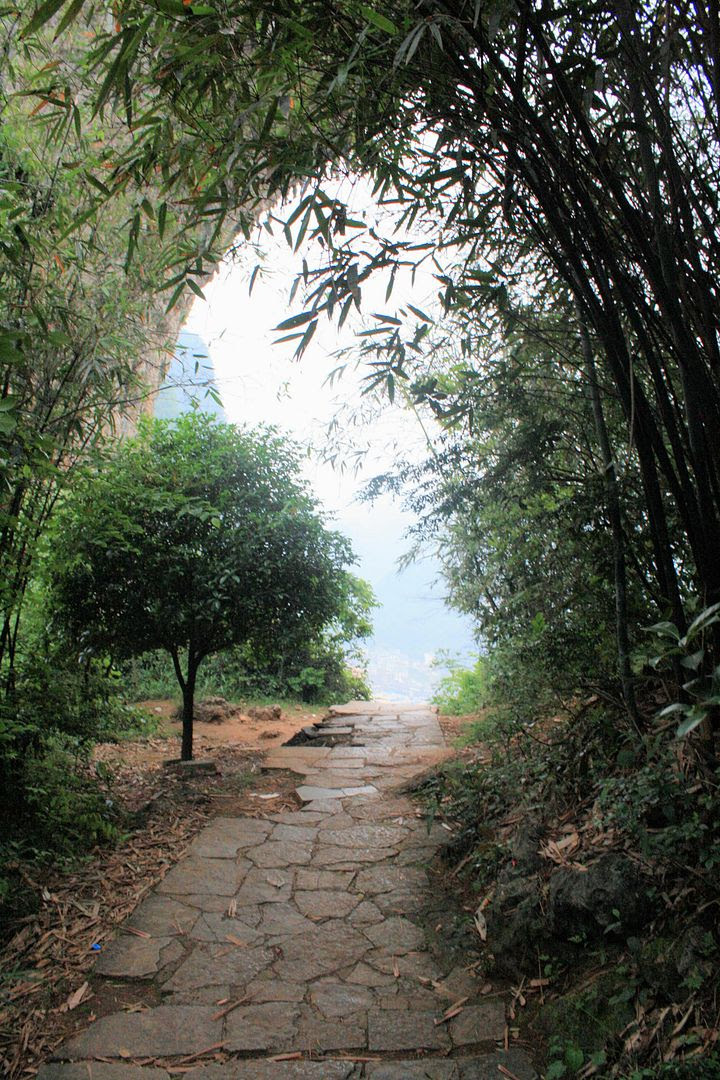 Our hike back down took us about 10 minutes. We headed back into the city, where we walked around a street market. I tried this Taiwanese sausage-in-a-rice-bun thing, and Michael picked up some McDonald's(!). To tide us over for the night, we picked up a few baked goods, including one of my favorites, eggettes. Driving to the retreat in the dark was a bit tricky, but we made it and watched Pitch Perfect on Michael's laptop.

The next morning, after getting a picture of us on the terrace of the hotel, we headed out on foot. 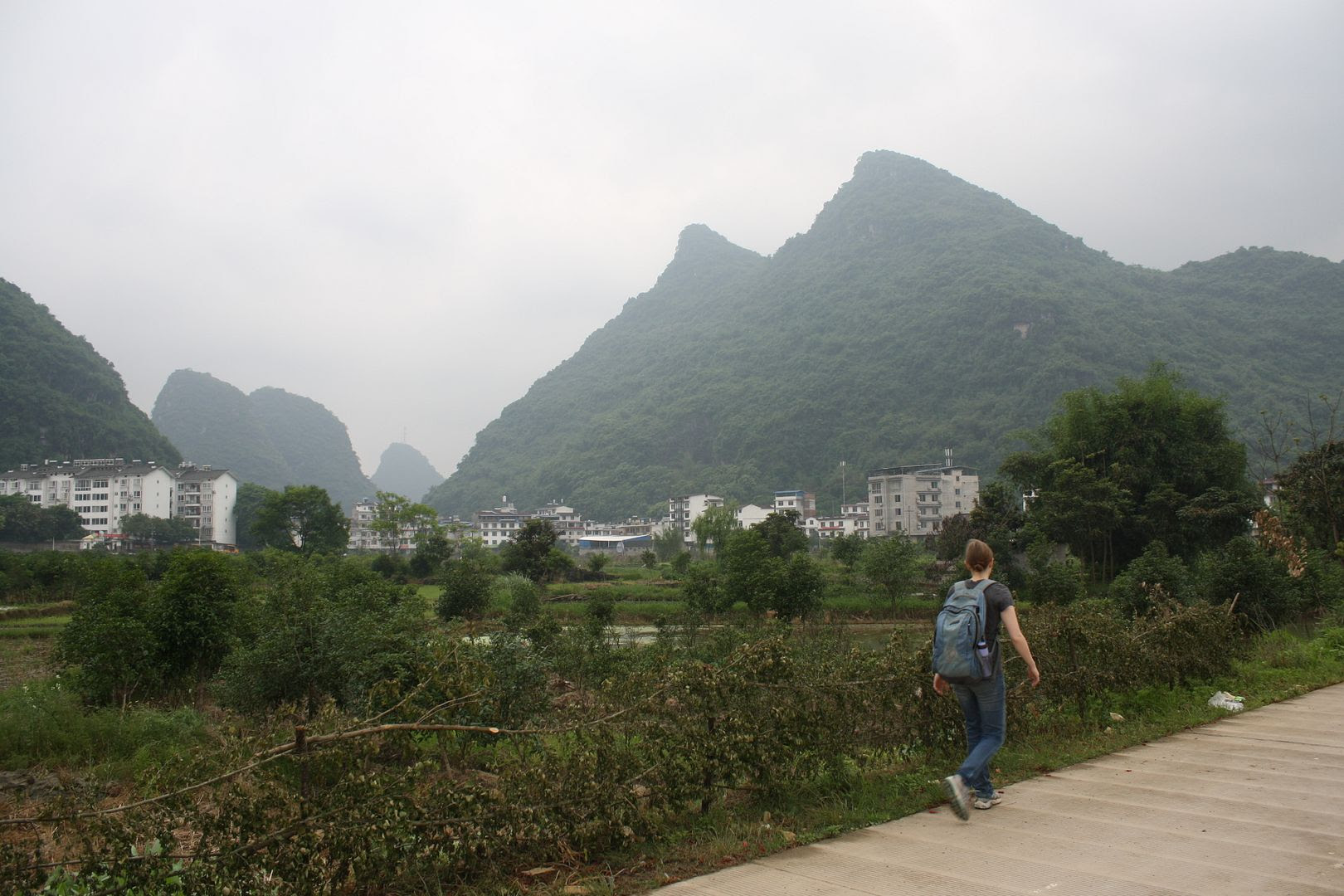 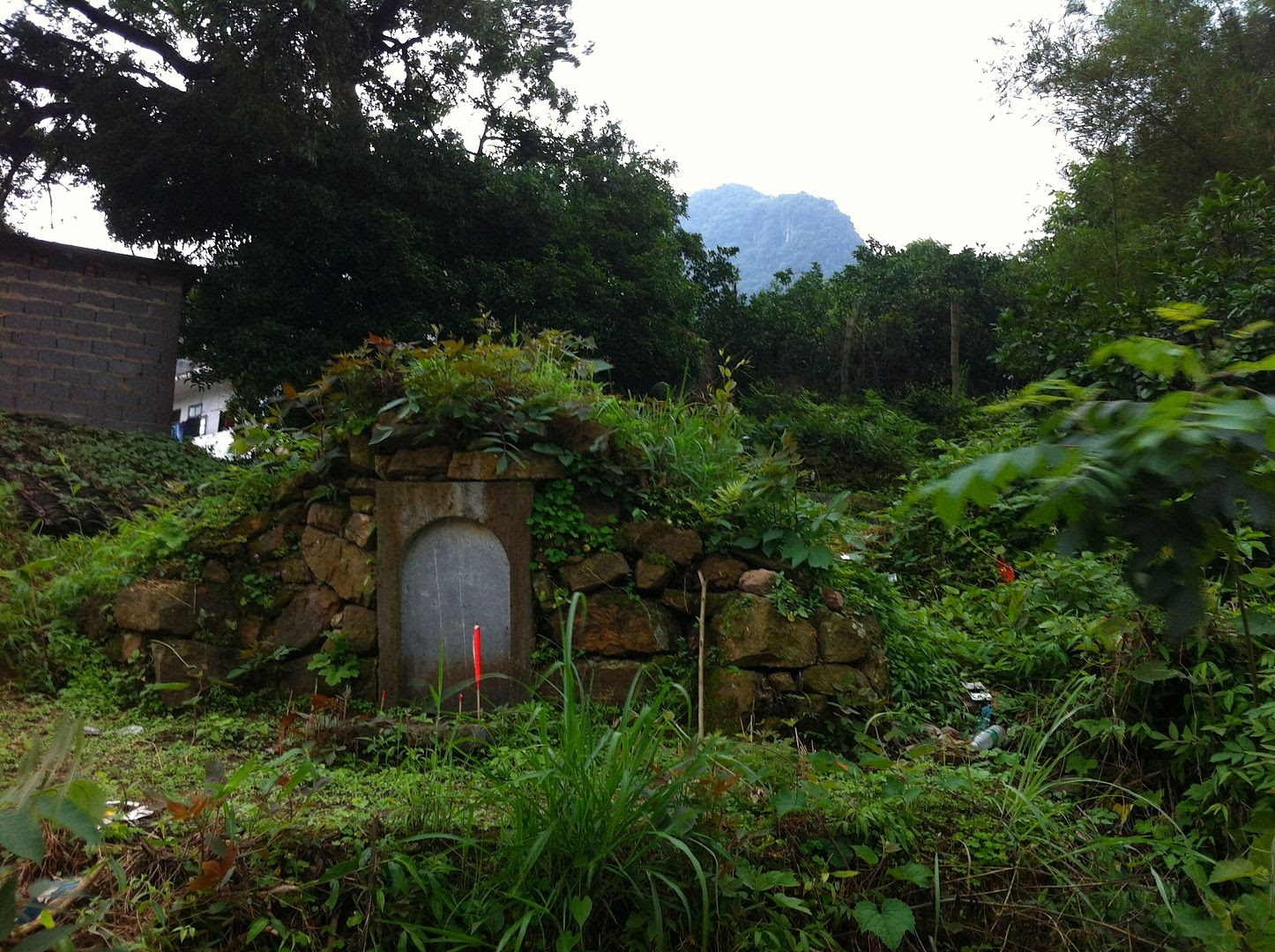 I finally got a picture of one of these interesting Chinese graves we'd seen on our way to Moon Hill.


We wanted to figure out a good way to get back to Guilin without having to pay 310 yuan (as we would have to if we took a taxi arranged by the hotel). We'd heard there was a 20-yuan bus to Guilin, but finding where that bus was took us at least an hour, and during the long walk, the skies opened up and drenched us, even with my shared umbrella. We were going to stay and maybe get a massage in Yangshuo, but by the time we found the bus and saw that there was one leaving that moment, we just said, "Let's go." In between laughing at the comedy kung fu movie that was being shown on the bus, I dozed off.

In Guilin, we spent a couple of hours at a cafe called Do & Me Cafe, drying off, surfing, reading, etc. Michael ended up eating my food because I lost my appetite when I found a dead bug in my noodles. Eventually, we headed out to find a place to get a full body or foot massage. I had changed into my flip-flops, and I ended up again feeling frustrated that China thinks it's a good idea to make sidewalks out of shiny tiles—they're slippery! Unfortunately, every new place we found looked rather run-down and we had no desire to go there.

We debated whether to go to the airport early, but I finally led Michael to a place that had "nibble fish" or "doctor fish" pedicures. He didn't dare put his feet into the tank with the bigger fish, especially after a girl said it hurt and moved to a tank with small fish, though he probably could have used it. We sat there for quite some time, shifting our feet around to let the fish nibble at them. Sometimes it tickled, but it never really hurt, and we both thought this should be used in the States, perhaps before a pedicure to soften up your feet? See the video Michael made here. After my feet were dry, I noticed that the skin really did feel smoother. 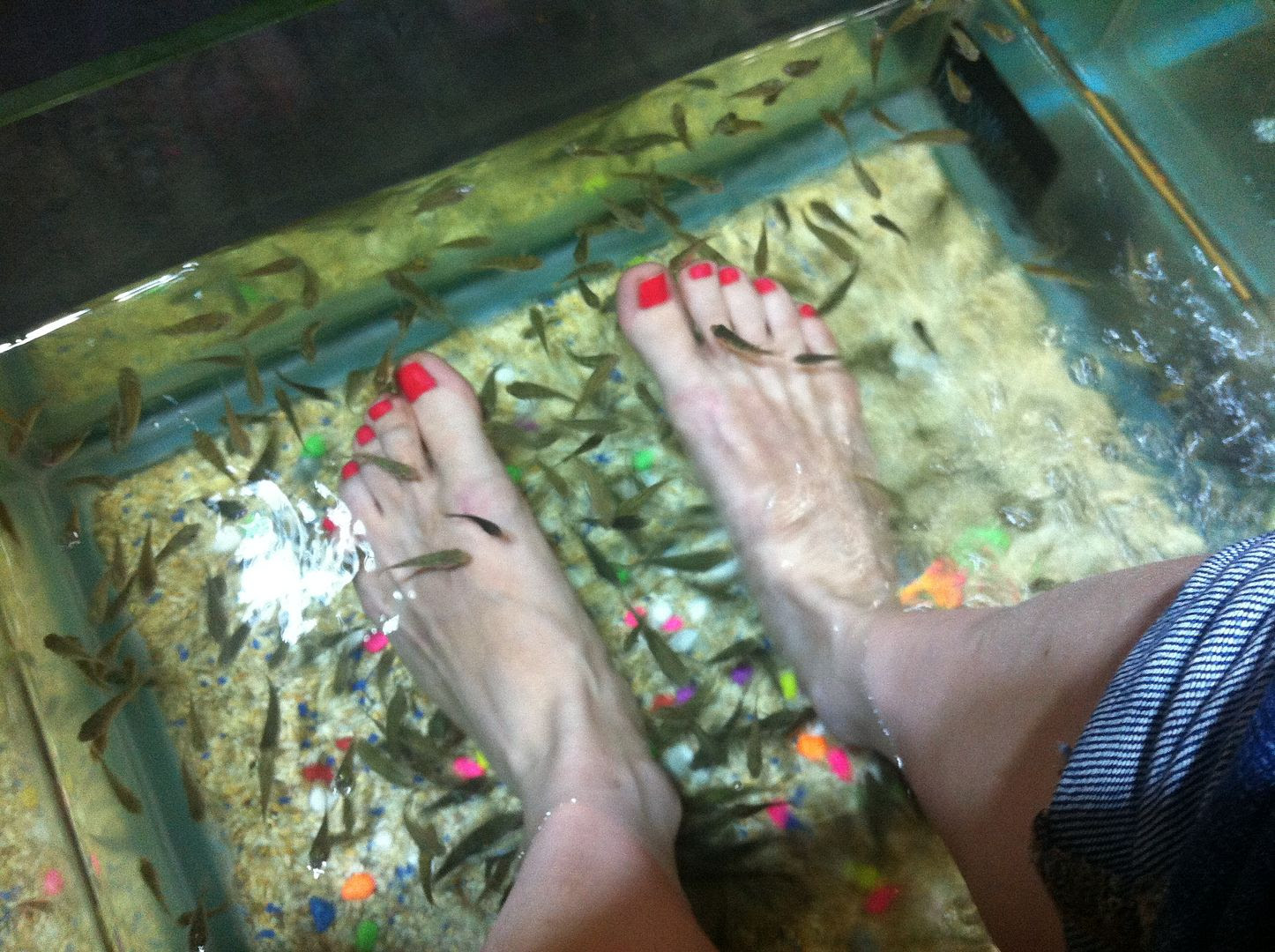 Michael worried that we got into a taxi to the airport too late, but our flight was delayed and we still had a few hours to wait. After we made it through security, we discovered that the three food places had no real meals, just drinks and a few snacks. Michael figured out that he could go out to buy some KFC in the main hall and re-join me as long as he didn't buy any liquid. I finished my book Red Azalea (and I'm now quite intrigued by Anchee Min's life story), and then started another book right before we got onto the plane, but I couldn't stay awake enough to even get my snack from the flight attendants. We got back to Tianhong Residence in Shanghai quite late, but I'd say it was worth the trip.