I decided I finally needed to get over to that neighboring country, Poland. (And before I go any farther with this thought, I have to tell you, you need to visit Kraków at least once in your life, preferably with a loved one; it's a charming city.) 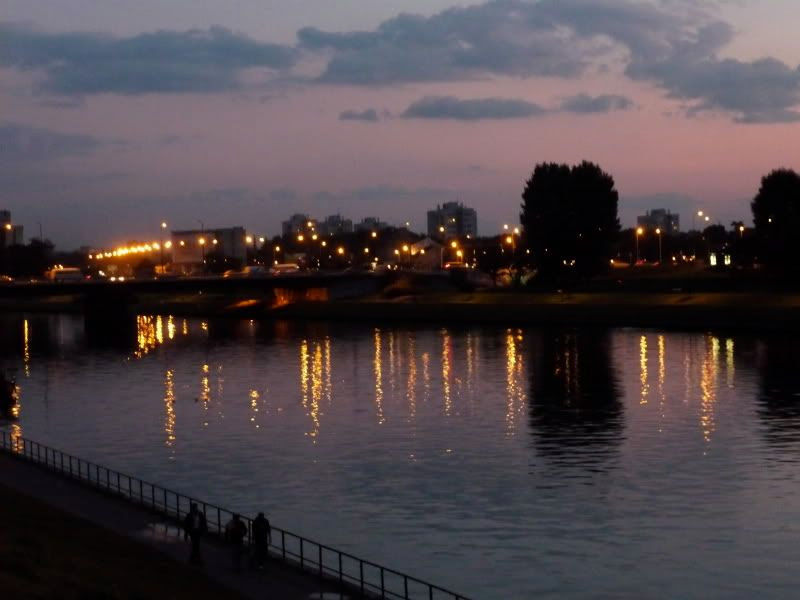 As I sat in a town square in Kraków last Wednesday night, I made a list of all the things I needed to include in my blog about Poland: how I got to Berlin with some guys who talked about writing journals, how the bus driver didn't charge me since it was late, how Alyssa was kind enough to let me stay there even though I had no time to get to know her, how the train the next morning took forever and how the other people in my section of the train included a nice woman who offered me cookies in broken German, a man who looked at his iPhone the entire time, and a girl who had techno music blaring from her corner, and how I read a good part of Dracula.

I thought of how Karolina, a girl who is a friend of Seppl and who I had met at his wedding last year, had been nice enough to pick me up at the train station and arrange a place for me to sleep that night. She showed me around Warszawa, which included me trying some pierogi and some of that cabbage-wrapped meat that takes forever to cook, going to the Chopin memorial in the park (and for a few minutes of random sunshine), walking through the old city, and seeing the city from the top of the Palace of Culture and Science, which has a nifty, hands-on fitness exhibition. We talked about her having been Catholic and how she had to have a certificate of her church attendance for school (Poland and Catholicism are good buddies). She worried about me rushing through Poland, but I assured her that was my travel style anyway.

I decided that it would be best if I went to Łódź (pronounced like "Whoa-dzh") that night, and she was nice enough to let me stay with her. The ticket guy made me pay more because apparently student tickets are only for Polish students. Łódź had a long, wide, charming street with a lot of memorials to famous Poles. We took a bicycle rickshaw and ate at a fabulous Mexican Restaurant that had cowboys and cowgirls for waiters and waitresses. While I ate my delicious chicken quesadilla, we talked about the Polish language. Wow. As a consonant-rich language, it is tough. None of the words, even after I knew how the sounds are, look like how I would say them. Especially "thank you." It sounds like "jaynkweeuh" to me, but it's spelled like this: dziękuję. I thought this word was a good example (just for you, Amy Lawson, just don't ask me how to pronounce it): wzdychać (to sigh).

When I ordered cheesecake in Polish with Karolina's help ("sernik, proscha"), Zorro came out with a mask and a cape and exciting music and brought it to the table with flourish. Here's the video (sorry it's dark):

We also saw an old factory that had been converted to a shopping center before we walked to her apartment.

The next day, I finished Dracula. I felt kind of bad that I had convinced Karolina to take me to Auschwitz, or Oświęcim, but it seemed the best plan. Her sister's car was broken down, but she was able to get her dad's car. First, we saw where the Jews from Łódź were packed into trains close to the old Ghetto. We went to Birkenau, which had mostly been destroyed when the war ended. The ruins of the gas chambers are still there. Auschwitz looked lovely, if you didn't know what had occurred there. The pictures of those who had been starved were unbelievable. One woman went from 75 kg to 25. The most haunting were the prisoner pictures lining the walls. There was no hope in their eyes. All the belongings that had been taken away from prisoners were piled up according to category--brushes, shoes, etc. There was even a whole room full of prisoner hair. You'd also be surprised to see how many prosthetic limbs were there when people with such limbs are such a minority. We also saw the gas chambers there and Karolina gasped because she hadn't seen them before, though she'd been to Auschwitz three times already. Then she took me to the train station, helped me buy a ticket to Kraków and back to Warszawa, and said goodbye.

When I got to Kraków, I bought a ticket from Warszawa to Berlin and then headed to see the castle. I walked around it twice before I found the entrance and heard from the soldiers that it was already closed. Oh man. I did get some nice pictures of the river and I enjoyed the charming city. Then I was the first to arrive at a concert at a church which used up my dinner money (you've gotta hear Chopin in Poland, I decided), so I sat in the very front left, where I could see the hands at the piano. A very serious, straight-postured man (Ireneusz Boczek) played Chopin, and then a chamber orchestra played some Chopin and Mozart and Strauss and Vivaldi.

So, sitting in Kraków's square feeling dreamy, I completed my list of things to blog about and congratulated myself on hardly having spent any money on the trip (I only exchanged one fifty-Euro bill). Then I did some people watching and saw some other loners sitting on the same wall.

The last thirty minutes before my train was to leave, several factors joined together to get me in a pickle. 1. Another loner came and talked to me and I told him he could walk the direction of the station with me. 2. I stopped to look at a photo exhibit in the street. 3. The man driving me from Berlin to Leipzig called to figure out details and would not quit talking. 4. I was too nice to run away from the Italian before saying goodbye to the talkative German. 4. I misjudged the direction of the street and ended up finding out from a local that the train station was 10 minutes to the right (my orientation is usually pretty good, so I was not happy about that). 5. I had six minutes left and haven't run since December. Nevertheless, I booked it for the full six minutes so that I thought I was going to give out right there on the dark street of Kraków. The entire time I was praying, but as soon as I got to the platform, I saw the train pulling away at the other end.

I couldn't believe it! It was the last train to Warszawa (and my hotel for the night) and it would have been perfect timing for my train to Berlin the next morning so that I could visit the Jewish Museum in Berlin. I was so exhausted and frustrated, I sat down and just gasped for air and cried a bit, feeling my muscles seizing up from disuse. Of course that had to happen right after I'd thought how great it was that I'd spent so little money on the trip! And now the charming city of Kraków would always be connected with the missing of a late-night train in my mind. There was no use worrying, though, I recognized, because it was water under the bridge (or I guess I could say "a train out of the station"). I'd just have to swallow and spend the extra money to get back home.

After several frustrating situations at the ticket window (the international window was closed until 5 AM and I needed to get on the train at 4:40 AM and I couldn't even get that ticket until 1), a chapter or two of Atlas Shrugged at McDonald's, and some rough sleep on a cold bench next to a lady who tried to talk to me in Polish and slipped in a couple of words of German now and then, I finally fell into my cubby on the 4:40 train. Glad to be alone, I slept for the first three or four hours and the ticket guy only interrupted me once. When another passenger finally did come, she talked and talked in a bubbly manner until she finally realized that I really couldn't speak Polish. She was so nice and showed that I could sleep with my feet on the bench so it would be more comfortable. When I woke up later, she gave me a roll with jam in the middle. Yum.

In Warszawa, at the ticket office, I showed the lady the ticket to the train I had missed, and I only had to pay 17 złoty (4 Euros) to buy a new reservation. I gathered my remaining złotys together and bought food. I was amazed how far the around 2 Euros went--I got a long baguette with cheese and ketchup on it, and three sweets with cheese or jam at the bakery. Mmm!

Again, on the train, I tried to sleep, but this time I was packed in the normal car (probably because of my late booking) behind an immature, talkative group of girls and next to a man who texted for several hours with the sounds to his buttons on.

Back in Berlin, the bubbly Alyssa and I chatted for a while, got dinner with her roommate, helped her roommate make a card for an intern, and watched "So You Think You Can Dance," which is somehow transferred from her parents' TV to her computer (it's called “Slingbox,” she said, and she also wished I could see "Glee"--no idea what that is).

The next morning, I went back to Leipzig with the talkative guy who turned out to not actually be as talkative as he is when someone has a train to catch. Ironically, we had five girls in the van and the one guy driver. Ha. Poland was great, but the getting there and getting back were painful--so much so that I was completely relieved to be back home.

So that's my trip. And here are some pictures (the Auschwitz pictures are especially interesting):