In order to save time, I'm just going to give you all the pictures and videos from Turkey, Bulgaria, and Sofia (with captions, of course) and let them tell the story. Please take the time, you'll enjoy it, I promise! Click here and don't forget to leave your mouse over the pictures so that you can see the details of the captions I wrote for you.

Here are some of my favorite pictures: 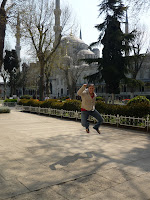 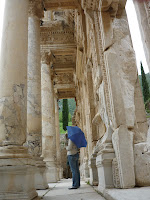 Break from the city on the mountain in Sofia, Bulgaria 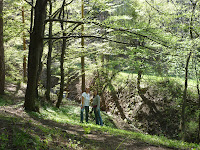 Buses: They have bus stewards and stewardesses who give out cake and water, and juice, if you can figure out how to say it. That's how I ended up learning Turkish. I quickly learned from a steward how to say "I like cake." There were also horrible soap operas played. Petula and I entertained ourselves by "translating" into German. Those soaps! Can you believe it, they fought about cake and chocolate and cooking the whole time! In Bulgaria and Romania, the bus driver and his cronies smoked, and since they were tour buses, there was no way to open a window. Misery, misery, misery, as if my hayfever wasn't bad enough.

Wild dogs: I have debated ever since it happened if I should tell this story. I guess you'll just have to trust me that it was one of those things where you laugh and laugh and laugh because of disbelief. If you really want to hear it, email me or call me. I turned to Petula who was choking and said, "Is there anything we HAVEN'T seen on this trip?"

Turkish: I can finally tell you why Turkish is so cool. Atatürk, the father of the country and practically the religion too, decided that the country needed to modernize or they'd be left in the dust. (I guess the mud is better than the dust.) Anyway, he changed the Arabic letters to the modern Turkish letters, so since the language was spelled out in new letters using sounds, every letter is said exactly the same every time. So easy, once one learns the letters. Here are the ones you need to know: Ç makes a "ch" sound. The normal C makes a J sound. Ğ is some kind of "zh" sound. There are two kinds of Is. The one without the dot makes an uh sound. This one, "İ" makes an ee sound. "İstanbul" is spelled with one of those. Ö makes the same sound as in German, kind of like the "ou" in "would." Ü also makes the same sound as in German, like a barfy kind of oo at the front of the mouth. Their Z is like the English z. So cool! I picked up some phrases and had people responding to me in Turkish, which of course didn't get us far. And the word order is crazy. I found my faked German accent becoming more and more Turkish-sounding.

Lips: After realizing that my chapstick supply was dangerously low and after having a conversation with Petula about how people say it takes two weeks of chapped lips before they heal themselves, I decided now would be a good time. It was so hard! Every day I found myself biting my lips, licking them, hoping they wouldn't heal smaller than they had been because the inside seemed so crispy and stiff. Although they're still a little funny (at least 14 years of a habit can't be dropped in two weeks), I think I made it! But I'm still wondering what that means for wearing lip gloss on special occasions. And I still love and miss the feel of putting on Natural Ice.

Saw some interesting things. Glad to be back home.