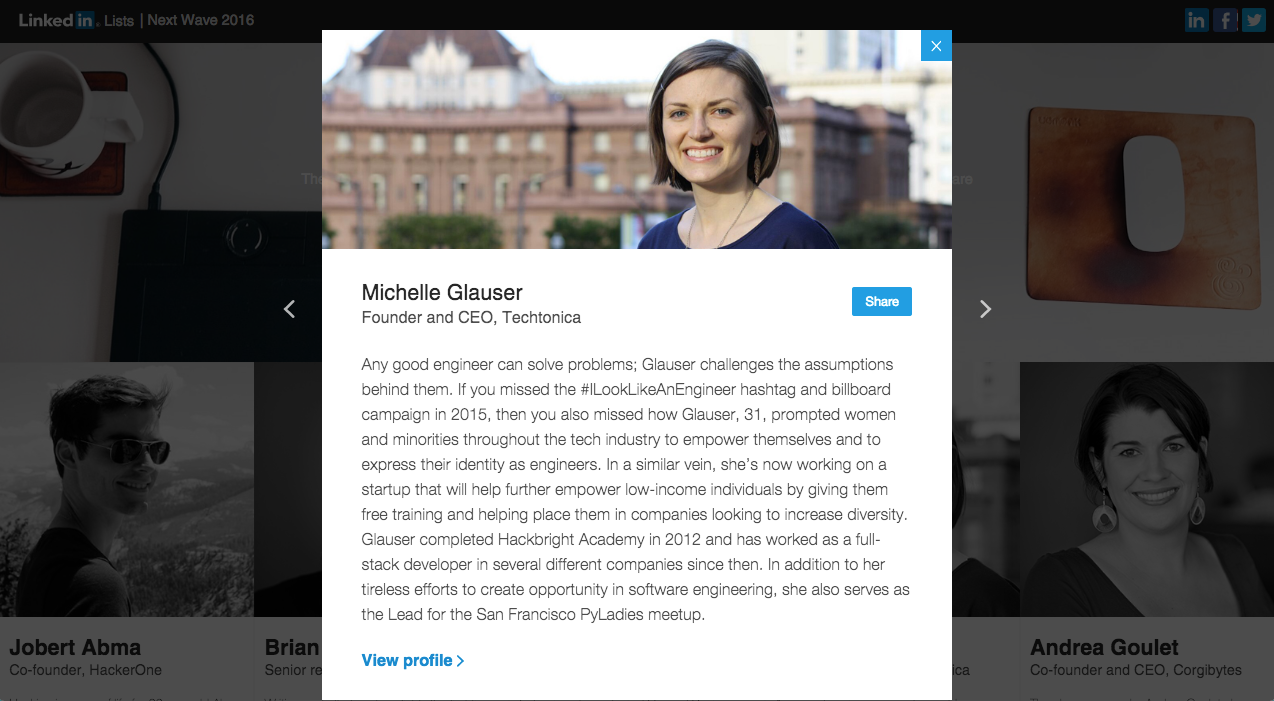 LinkedIn chose me to be on their first "Next Wave" list of professionals 35 & under—I was in the top 10 for software (you can read more here). This is what they wrote about me:


Any good engineer can solve problems; Glauser challenges the assumptions behind them. If you missed the #ILookLikeAnEngineer hashtag and billboard campaign in 2015, then you also missed how Glauser, 31, prompted women and minorities throughout the tech industry to empower themselves and to express their identity as engineers. In a similar vein, she’s now working on a startup that will help further empower low-income individuals by giving them free training and helping place them in companies looking to increase diversity. Glauser completed Hackbright Academy in 2012 and has worked as a full-stack developer in several different companies since then. In addition to her tireless efforts to create opportunity in software engineering, she also serves as the Lead for the San Francisco PyLadies meetup.

I don't really know how they came upon my name, chose me, and found out all of those details (it seems a little too specific to be directly from my LinkedIn profile, but maybe not) but it was definitely an exciting day with a lot of people reaching out and following me on various platforms. My feelings were varied from embarrassment and not wanting to share, to doubt that they'd chosen the right person, to being humbled by being placed with other seriously amazing people, to being glad to have some of my hard work recognized in some small way.

I ended up sharing in many places for a few reasons:

Hilariously enough, when some people from LinkedIn first emailed me and said I was in the running for an award and asked for my best address, I stupidly told them, "This is my best address," thinking they meant email address. When they came back asking for a mailing address, I became really suspicious and asked what they'd be sending and if my mailing address would be added to a list and doom me to never-ending snail mail junk. They didn't answer me the first time, and when they followed up, I again asked the same questions before they told me, "We want to send you a gift for winning, but please don't tell anyone yet, and no, you won't be added to any list." Still, I wasn't quite sure if these people were really from LinkedIn, so I gave them Michael's office address. 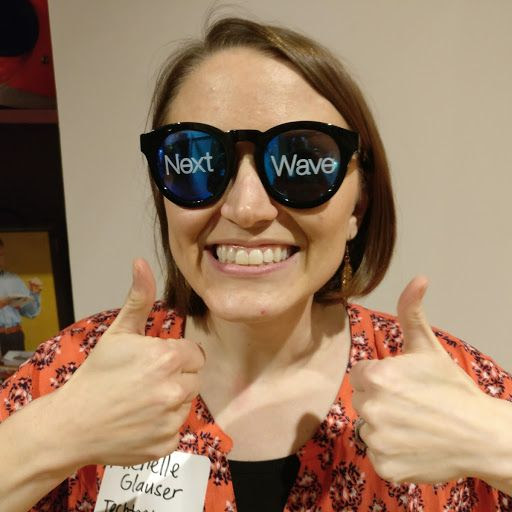 These sunglasses arrived in a box much bigger than the sunglasses. They were in a special plastic case nestled in nice packaging and all of that was wrapped in tissue paper. I told Michael, "These are either the most expensive sunglasses I've ever owned or the most delicately-wrapped sunglasses ever."

Thanks for the honor and the gift, LinkedIn!
Email ThisBlogThis!Share to TwitterShare to FacebookShare to Pinterest
Eingestellt von Michelle Glauser