I signed up to get my hair cut at Sassoon Academy, because ever since I had my mom cut off ~12 inches earlier this year, I've felt like I didn't know what to do with my hair and that maybe they could help me figure something out. Because I signed up to be a model, I only paid $21, but it was a surprise when I was lined up with the edgiest-looking student, a 60-something-year-old Japanese woman named Yoko. When I told her I was open to ideas, I wanted something easy, and that I had some pictures I could show her of haircuts I liked, she was very insistent that she didn't want to see the photos.

The teacher who walked around checking progress mentioned several times that she didn't get the feeling that "Michelle really wants something super edgy" and that she thought I'd just want to tuck it behind my ear. I agreed. But Yoko was really set on doing something so I would be "updated." Her idea included a fringe and I haven't had one since I was 12 or so. I hated my mom saying, "You can't go to school until your bangs are curled" every morning, and the process of growing said bangs out seemed so annoying to me at the time that I just haven't wanted them since. Oh well, they're back! Also, I don't ever recall having hair short enough to feel like it's been buzzed, so it's a first to have a weird little short part in the back.

Anyway, I kept telling myself that it was just hair, but the result was a bit shocking to me and for the first few days I felt like Cousin It (I had to show Michael who that is) and I felt like I had to explain to friends I saw that yes, I had a weird new haircut. I actually really liked that I finally had a new hairdo and that they'd taken my face shape, hair texture, desired maintenance, cowlicks, and other things into consideration, but in a way I felt like Yoko tried to make me someone I'm not and I feared that I might have to go find someone to give me a pixie. However, I've since kind of figured out how to calm it down a bit, and it's definitely less edgy when parted on my right instead of my left.

Yoko told me that all I needed to do was blow dry and then basically mess up my hair to make it look good, but I didn't expect that I'd need to wash my hair every single day to make it look good—no pony tails for me right now. It's weird to wash because there's not enough long hair to gather together to squeeze out. Also, the bangs sometimes get really greasy and separated from me biking and/or not wanting them in my eyes all the time and then I feel really embarrassed by them and can't do much to hide them—they still get a greasy split in them when I use a bobby pin because of how thin my hair is, and dry shampoo doesn't seem to do much.

So here are the photos Yoko took (meaning this is how she intended it to look on a daily basis, which it definitely doesn't because I just can't handle it all over the place).

And here are some pictures of me with the new 'do: 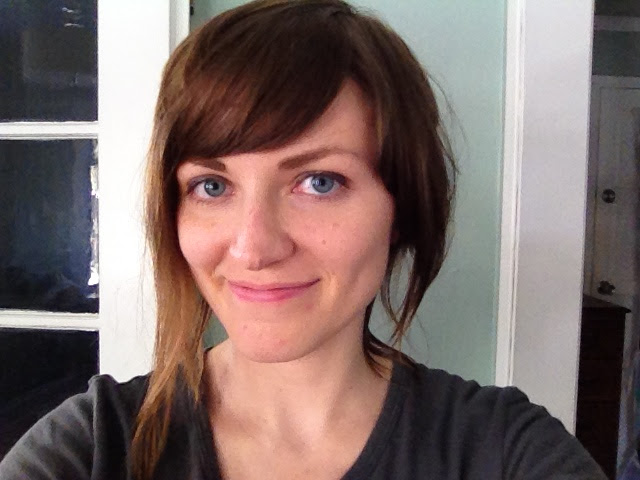