This post was originally 4 pages without pictures. I'm trying. (But if I were really motivated, I would put all the videos together into one.) 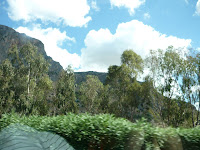 We drove from Jessi's house to Bremen around 2 AM and "slept" in the freezing car until our flight with Ryanair, which was very efficient and inexpensive and allowing of my two jackets and a blanket for a skirt. I slept through the short flight, so it was a bit surprising to wake up and be in another country. We were five: Jessi (my friend from the tiny town of Veckenstedt who I met on my mini-mission in Berlin), Markus (from Brandenburg, served in Italy), Marcel (from Hamburg, served in Italy), and Sara (Marcel's girlfriend, also from Hamburg), and I.

At church, a missionary tried to translate on headphones for us, but he kept "getting lost." I especially enjoyed hearing, "He pretty much said that without Jesus we'd all be screwed." After church, the beautiful members greeted us heartily with handshakes and side kisses and I was extremely surprised to find that practically no one could speak English, even the young people. Jessi and Sara were pretty good at figuring things out using their Spanish skills. I felt really helpless not being able to understand anything.

A woman invited us to stay at her house after she uninvited the missionaries to dinner. We drove through what looked like ghettos to me, so when we went inside her apartment and found it clean and very nice, it was a surprise. We got to eat a fabulous casserole she had made from a huge pan. She caught me taking a picture and so she showed me a bigger one! 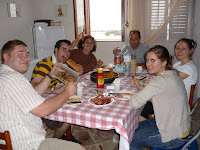 Jessi and I slept a bit on the couch and then tried to learn an Italian game that was too complicated for my tired mind. Then we drove up to Monreale, a place on the hill where you can see the city and the ocean and some cool old buildings. Jessi and I got in our photo of us with local policeman. All three of us girls slept in Enza's bed. 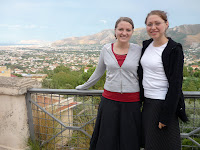 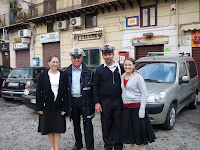 We had Cornettis, fabulous fluffy and sweet pastries, for breakfast. Then we walked through the catacombs in Palermo and looked at dead people. Interesting. We wandered through the city and ate cactus fruit and yummy pizza (though Jessi's fell on the ground, so she had very little). My sunscreen had been confiscated in Bremen, and apparently they don't use it there. We had to look and look and I ended up paying 10 EUROS for 100 grams!!!!!!!!!!!!


We spent some time on the beach, where the water was so clear and shallow for a long time.

Then we drove to the Albanese family (which took us a while because we turned around one street before their house and ended up on the freeway going the wrong way). They prepared a dinner for us by winding a really, really long sausage/wurst around and around a circular pan and topping it with potatoes. I was really impressed by their three beautiful daughters. Brother Alabese showed me a list of Sicilian sayings with English translations, which made absolutely no sense. He tried to explain in German, but yeah . . . my favorite was "The pig is inside." 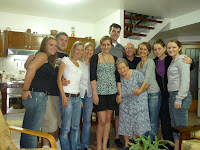 When we were driving back to Enza's, we stopped to pick some cactus fruit using a bag. Mmm. I could hardly sleep that night, because Jessi was sick and had to continuously get up to blow her nose. Every time she got up, blew her nose, opened the door, walked around, and jumped back into the bed, I woke up again. Long night. Poor Jessi.

This time, Jessi and I picked out the Cornetti for our breakfast. Totally fatty but delicious. As Sister Dixon would say, "You know where that's gonna go. Straight to your butt." After breakfast, we drove to Catania. I proved throughout the whole trip that I'm very good at sleeping during car rides. Catania was prettier than Palermo. At the market, I kept bargaining with a man. He made a joke that he could just give it to me. I said okay but ended up paying 6 Euros for a shirt/dress thing that will be good with leggings. Jessi stopped at every little booth to look at something for her sister or her nephews, even when the booths were closing and the sun was getting ready to scorch everything in sight and her cup of the first kind of ice cream was turning to sugar water.

Then we went to the beach, which made me sad because I wanted to see the volcano. It took us a long time after that to find the mission home. I was really impressed with the garden and the house, which had everything a mission president could need, including office, piano, many beds for missionaries, etc. We selected beds, used the computers, called my dad to wish him a happy birthday, and then went to dinner with the elders (special permission received). Jessi ordered bruschetta, which we both thought was a nice mixture of tomatoes on pizza dough, but it turned out to be burned, flat pizza dough that had a lot of oil and a couple of slices of tomatoes. She was really disappointed, though I tried it and thought it wasn't too bad after I flicked off the burnt parts. My pizza was excellent, though I ran out of napkin before I could get all the grease off.

Early in the morning, around 3, I woke up and I was absolutely parched. I heard Sara get up and drink some water, so after she was asleep again, I got up but couldn't find the water (she had taken it). I went downstairs and drank 9 glasses of water. It was so warm and I couldn't cool down. I stood by the window and fanned myself, then started sprinkling water all over my skin. My tongue wanted to keep drinking, but my body couldn't take anymore. I finally got back into bed after I heard someone else moving around upstairs. It turned out to be Jessi, who was also thirsty.

Around 6:30 we all showered and then had breakfast, which included blueberry Jiffy muffins from the base! Mmmm! The president and his wife had already left, so I tried out the piano, took a few pictures, and off we went. As could be expected, the drive seemed especially long because we all had to pee the whole time. When we got to Eriche, I was charmed. It was a small city with beautiful old buildings and beautiful young people everywhere. It was about time for siesta, so we had a hard time finding a restaurant that was open. Eventually we got some reheated pizza and some arrancino.

After that, we decided it was finally time to have some gelato! Yahoo! We found my store (it was called "Gelato di Michelle") and ordered brioche, which is gelato on a roll. Awesome. 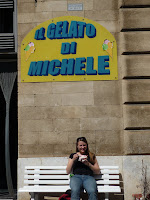 Then it was off to yet another beach, which I found the most fun because it actually had waves where we could do some pretty softcore body surfing. The water was the saltiest I've ever tasted yet--it made my eyes water and my zits sting. The colors of the sky and the beach and the water were fabulous, and the sand was the softest I'd felt yet. I used a lot of sunscreen to block the sun that was beating down on us in a friendly kind of way, though Marcel kept telling me not to put on sunscreen. (I used the body is a temple argument.) 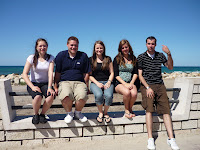 We finally started to drag ourselves off the beach (after the girls changed behind a towel and laughed at our inability to get all the plants and sand off before we put on our clothes) when I asked Markus to go with me to give some people a Joseph Smith pamphlet. He did the talking, I did the smiling, and one of them took the pamphlet. It was a group of old ladies with shiny, bright red skin and bulging bellies, and their swimsuit straps pulled down so they wouldn't have lines. Not my idea of what I'll be like in 50 years.

At the airport, we gave away our water and went inside to eat some last canollis and check in. I had to pay extra to check in, and I was going to pay with a card, but Markus gave me some Euros. The whole trip, he was very generous, for which I was grateful. That is one awesome example he set for me. Ryanair was again amazing. We walked through security (Jessi gave the security guys a pamphlet--they all gathered around and asked for her to write her number on it, which she turned down as she wrote her email address), stood in line for about five minutes, and were on the plane in the air within twenty minutes. Gotta love it. Back in Bremen, we parted with Sara and Marcel, then Markus drove us back to Veckenstedt.

Overall, I've got to say that Italy puzzles me, though I really enjoyed it. It is a really dirty country. So why is it charming? I think it's because things that were built at the height of Italy's history are still there, giving it a sometimes-classy look. But they don't take good care of the old buildings and they don't build any new, good-looking ones. Everyone seems to accept that it's part of Europe, but it doesn't seem like a first-world country to me, and all the countries that are behind in Europe have a hard time getting into the EU. I immediately connected Italy with Costa Rica because of how it looks and because of the traffic. Driving was absolutely ridiculous. I'm so glad Jessi drove. And although siestas sound like a good idea on some days (okay, for me, most days), they seem awfully old-fashioned and counter-productive (apparently they started because of the heat at that time of the day, but people should be able to manage that better now, shouldn't they?). One of these days I'll make it to the more famous cities in Italy.